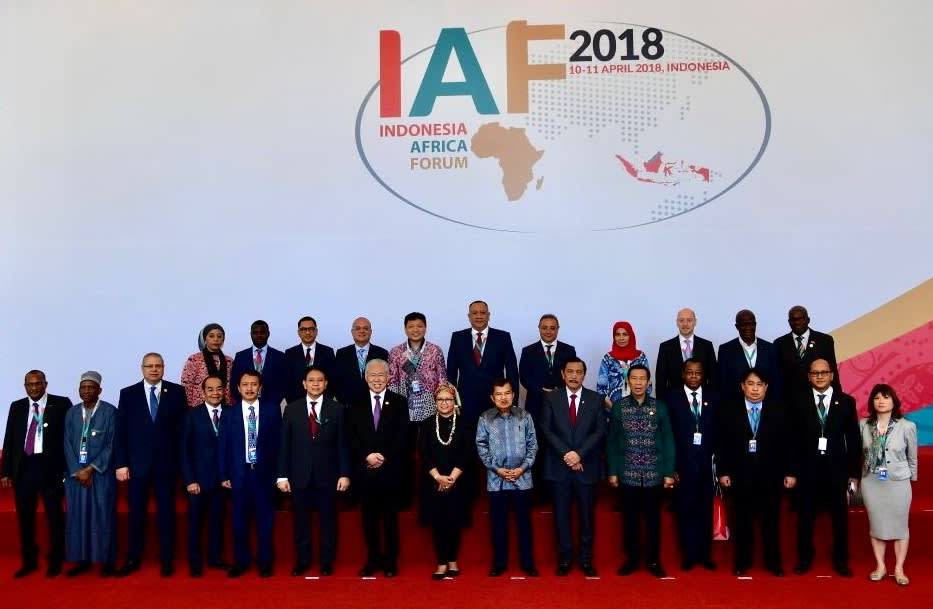 NUSA DUA, Bali -- There were smiles from the African delegates gathered on Tuesday for the Indonesia Africa Forum in Bali as Indonesian company executives signed a series of Africa-related business deals. The agreements not only signalled Indonesian companies commitment to Africa's economic growth, but also showed that the country was serious about increasing its influence on the continent.

The business deals signed on the day were worth $586.56 million and included one worth $26.7 million by state-owned contractor Wijaya Karya in Niger. Future potential business deals worth a total of $1.3 billion were also announced, including one in Zambia by Inka, the state-owned train manufacturer, and one in Nigeria by state-run oil company Pertamina.

"[We] work together in advancing economic cooperation between Indonesia and Africa," said Jusuf Kalla, Indonesia's vice president, in his opening remarks on Tuesday for the two-day conference. "The development of cooperation with Africa is a priority of Indonesia's foreign policy."

Kalla drew laughter from the crowd as he drew parallels between Africa and Wakanda, a fictional country in the recently released film "Black Panther". "'Wakanda' had large potential, which is sometimes unknown to the outside world. So is Africa, a continent with immense potential," Kalla said.

Luhut Pandjaitan, Indonesia's coordinating minister for maritime affairs, said that the Jakarta government was planning a task force to export Indonesian infrastructure to Africa "in the near future."

Jakarta's Africa push is a welcome development for Indonesian companies, as seen in the optimism among the executives attending the event. "Africa's growth potential is huge," said Iwan Joeniarto, president of GMF AeroAsia, the maintenance unit of the country's flag carrier Garuda Indonesia. "Several African airlines are experiencing 100% growth, so for us, the market is highly interesting."

GMF already has deals with airlines in countries including Kenya and Djibouti, and Joeniarto said he had signed a maintenance deal with Nigeria's Max Air as well as Ethiopia's Ethiopia Airlines worth $3.17 million.

Indonesia's history with Africa goes back decades. Former Indonesian president Sukarno was instrumental in forming the Asian-Africa Conference, also known as the Bandung Conference, in 1955 as nations from both areas looked to form a block that was separate from any involving the U.S. or the then Soviet Union.

The archipelago nation has lacked any significant diplomatic achievements since then, and the current government, led by President Joko Widodo, is looking to leverage the deals forged by the state-owned enterprises to increase the country's influence in the continent as well as in the international community.

For a start, Indonesia is pushing to become a non-permanent member of the United Nations Security Council, and any backing from African nations will help its case. Widodo has also set a goal for Indonesia to become one of the 10 biggest economies in the world by 2030. Tapping into the growing African market is seen a fast track to achieving that target.

However, at least for now, government officials are being modest about such motivations. "You might ask, why [this] Indonesian initiative," Retno Marsudi, the country's foreign minister, said. "The answer is very simple and very easy; because Indonesia loves Africa."

Her comments were met with a hearty round of applause.