OSAKA -- Old-fashioned underpants and turning insects into fish feed might not be the first things that come to mind when someone mentions Panasonic, but these are just some of the ideas being developed at 100banch, a shared work space set up by the Japanese electronics maker.

In addition to fostering a new generation of entrepreneurs, the project is aimed at rekindling a passion for innovation in the company as it prepares to celebrate its 100th anniversary.

The incubator is in a renovated three-story warehouse just a few minutes' walk from Shibuya Station, in the heart of one of Tokyo's most fashionable districts.

After climbing the steps past the first-floor cafe, visitors enter a large open-plan work space with an exposed-concrete interior.

Right in the middle of the floor, one startup has pitched a tent in which it keeps crickets in plastic boxes. Ecologgie is exploring ways of farming the insects, which are rich in high-quality protein, according to 24-year-old President Seiya Ashikari, to produce feed for commercial fish farming. 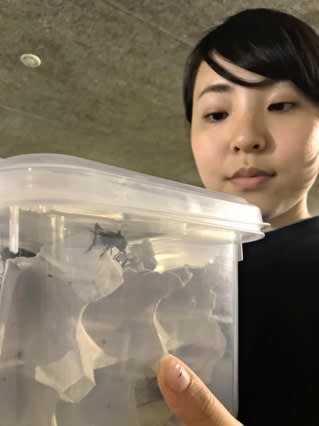 Ecologgie is developing the technology to breed crickets for the production of aquaculture feed, a process the company hopes can help tackle global food shortages.

If he succeeds in breeding them on a large enough scale and developing ways to use them as aquaculture feed, Ashikari hopes they can play an important role in alleviating future global food shortages.

Yuzo Hoshino, the 30-year-old CEO of another company using the building, is pursuing an altogether different dream.

He set up Fundoshibu in 2016, with the aim of taking traditional Japanese loincloths to the world.

Hoshino, who studied clothing at the University of Tokyo, was inspired by the airy comfort of fundoshi, which are roughly the size of a tea towel and have strings attached to tie around the waist.

Such is his belief in the product, he will happily appear at promotional events wearing nothing else -- having a well-toned physique clearly does not hurt when he is on modeling duty.

The company recently launched an online store through which it sells fundoshi in colorful, modern designs, with a view to turning profit soon.

Another young company making use of the space is Shiitake Matsuri, which sells concentrated vegetarian broth made with shiitake mushrooms, as well as kits to grow them at home.

"Our products use absolutely no animal-derived ingredients, so vegans can enjoy them," a member of staff said.

Panasonic launched the 100banch program in July 2017 in partnership with web developer Loftwork and restaurant operator Cafe Company, and advertises the program through social media.

To use the space, entrepreneurs must be aged 34 or under, and their concepts need to be screened by a panel including famous researchers and bloggers, who are given free rein to pick out projects they simply feel like supporting.

So far, about 70 projects and startups have been involved.

Panasonic gives all its employees free access to the workspace so that they can pass on advice regarding business and technological issues.

Moreover, the company hopes that some of the entrepreneurial spirit can rub off on its staff when they see snap decisions being made and products quickly being taken from concept to market with a view to developing them post-launch.

Panasonic staff can also use the workspace to discuss their own projects while mixing with the tenants, which has resulted in about 100 being developed so far.

Executives, including President Kazuhiro Tsuga, have visited 100banch since it was launched. Shiitake Matsuri produces vegan broth and home cultivation kits for people to grow their own mushrooms.

The ideas being pursued at the center range from the novel and interesting to the downright quirky, and most are very far removed from Panasonic's core business areas.

Many will be difficult to turn into successful businesses, but that makes them no less worthwhile, said 100banch organizer Rie Noritake, who pointed out that Panasonic founder Konosuke Matsushita started the company based on ideas that seemed reckless at the time.

Another aim for 100banch is to improve Panasonic's public image.

According to employment information provider Mynavi, Panasonic was the fifth most popular choice of employer among male science and technology students who are set to graduate in 2019, but ranked 91st among their female counterparts. It was also outside the top 100 for nontechnical graduates.

Moreover, the company hopes its staff can be inspired by being around young entrepreneurs, according to Noritake. Panasonic's large, multilayered organization makes product development a cumbersome process.

Inspired by what was happening at 100banch, Panasonic's Taiichiro Ozaki created a prototype of a lighting fixture modeled on a traditional Japanese lantern.

Each of its four sides has a liquid crystal display showing images lit from the inside. He had originally come up with the idea a few years ago, thinking there may be some demand from restaurants, but stopped short of developing it. 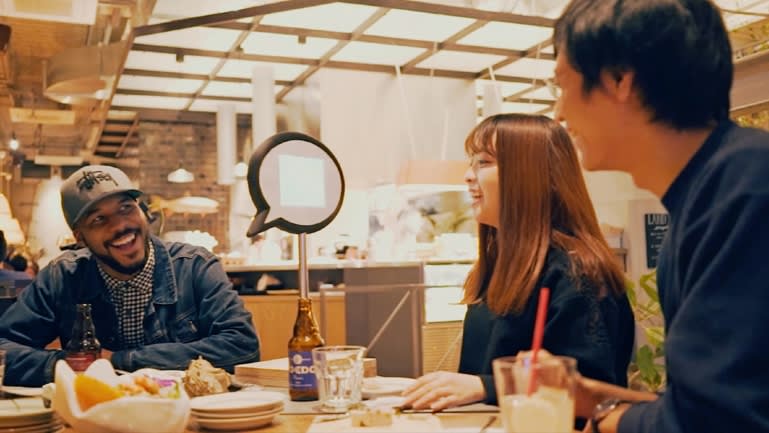 One of the projects being developed at 100banch is a real-time conversation translator.

There have also been cases in which Panasonic engineers have assisted 100banch members with the development of their product ideas, helping with the finer points of design, such as ensuring conformity with industrial standards.

The product has a speech bubble-shaped, double-sided screen on a stem standing on a base. Placed on top of a table between people speaking different languages, it displays translated text on the screens as the person on the other side speaks.

Panasonic has opened a research and development center in Silicon Valley and bought into a number of manufacturing startups. What differentiates 100banch is the focus on passion and creativity, without placing excessive demands on results.