JAKARTA -- With help from one of South Korea's largest entertainment companies, Indonesian conglomerate CT Corp. aims to draw on a young, growing population of music fans to create a homegrown version of K-pop.

Trans Media, an arm of the Indonesian group, recently signed a deal with SM Entertainment that could pave the way for Indonesian artists to gain international fans -- something with which they have struggled.

K-pop offers an attractive model. What began as a hybrid of South Korean and Western music has grown into a business with global reach, generating 5.7 trillion won ($5.1 billion) in related revenue in 2017, according to data from the Korea Creative Content Agency

"Our young generation have become very big fans of the Korean wave," he said. "We also have to open up," but "rather than a Korean wave coming alone, it is better to collaborate with an Indonesian wave."

The partnership is "committed to develop the creation of an Indonesian pop market which will promote the country's diverse creative assets to the global stage," the companies said in a statement. 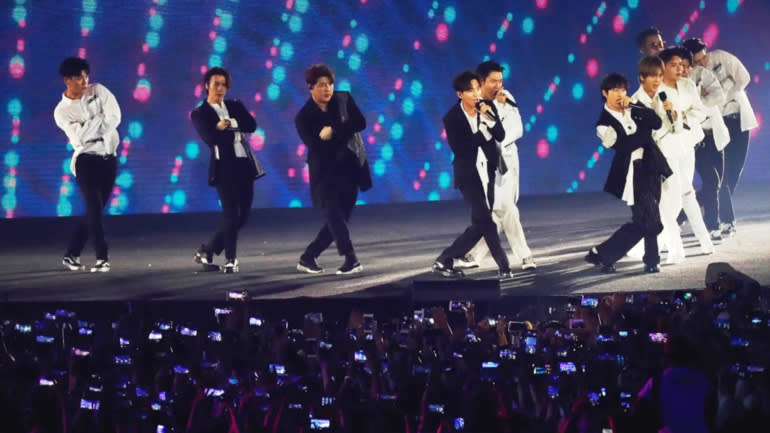 K-pop artists Super Junior perform at the closing ceremony of the 2018 Asian Games in Jakarta.   © Reuters

The joint venture offers CT, whose businesses include retail and finance, a chance to expand its media business beyond the Indonesia.

For SM Entertainment, which manages artists like girl group Red Velvet and boy band Super Junior, the immediate gain will be greater access to a Southeast Asian nation that is home to hordes of avid South Korean culture fans.

The company will be able to use Trans Media's television networks as well as CT's store chains. SM Entertainment said it will bring its expertise in casting, training, production, marketing and talent management.

CT's supermarket chain Transmart -- rebranded from Carrefour after acquiring a joint venture with the French retailer in 2013 -- has become one of the country's three biggest. The group also owns both free to view and cable TV networks, as well as several online news portals.

Having a major Indonesian conglomerate as a partner will help SM Entertainment navigate the Indonesian market, where the growing popularity of K-pop, or Korean popular music, has begun to attract unfavorable attention from the country's conservative Muslims. Indonesia is a secular state, but conservative Muslims are gaining clout ahead of the presidential election in April.

A television commercial for Singaporean online retailer Shopee featuring the popular K-pop group Blackpink was de facto banned by a local watchdog due to "indecent" content in December, after an online petition filed against the ad was signed by more than 120,000 people.

"The commercial features several scantily clad women singing and dancing," the commission said in a statement. "The Shopee commercial potentially breaches decency norms that the general Indonesian public adhere to."