JERUSALEM -- Israel's Mobileye has expanded its presence in the auto industry through tie-ups with Asian companies such as China's Baidu thanks to its strength in visual processors, a key field in the intensifying race to perfect driverless technology.

The tie-ups are in line with Mobileye's strategy to build autonomous cars by 2021.

Mobileye, which was bought by U.S. chipmaker Intel last year for $15 billion, announced a strategic relationship with Chinese internet group Baidu last month. As part of its driverless car development, Baidu will introduce Mobileye's artificial intelligence-powered EyeQ chip to process visual information around the car captured by cameras. The technology will then be sold to Chinese automakers.

The company currently has 1,400 employees following the addition of Intel staff, up from 800 before the acquisition.

"We are an independent subsidiary of Intel," said Amnon Shashua, CEO of Mobileye, in an interview with Nikkei. "I think that Intel is a perfect partner. Whatever they can do to help us, they help us. Whatever we think we do not need, they don't push us."

Shashua described autonomous driving as the integration of several technologies. It requires key decision-making capabilities, including whether to proceed, stop or turn based on information such as the position of other cars and pedestrians gathered from cameras, radars and sensors.

"In China we are working with SAIC Motor," Shashua said. "We are also working with tier one [suppliers], like High Rain. We have now about 15 local original equipment manufacturers in China that are adopting our technology for carmakers." 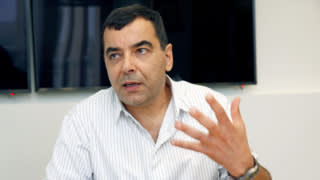 Amnon Shashua, CEO of Mobileye, whose visual processors are being used by companies like Baidu to improve their autonomous driving technology. (Photo by Ariel Jerozolimski)

Mobileye is also stepping up cooperation with South Korean and Japanese companies. Shashua said one of his largest customers was Hyundai Motor, and his company was also working with Japanese automakers like Nissan Motor, Mazda Motor and Mitsubishi Motors. Mobileye is partnering with Sony on sensors and wants to work with Toyota Motor in the future.

The CEO also said level four and five driverless technology -- full automation that nears or equals human capability -- will be ready around 2021. "We will have our robo-taxi technology ready for deployment in early 2020," he added.

Shashua views the market for autonomous driving as split between ride-sharing and luxury cars. "On the one hand, you have the robo-taxi, which goes into a mobility-on-demand service," he said. "Lyft, Uber and new operators will come out, some of the operators will be car companies themselves, like General Motors."

Premium cars, meanwhile, can benefit from the added value of autonomous driving. Adding "10% or 15% on to the cost of the car for an autonomous-ready feature, you can then provide a value to the driver in which, if you want to, you can sit in the back seat and let the car chauffeur you."

The chip market is crowded with competitors like Continental and Bosch of Germany and Autoliv of Sweden. But rivals like U.S. chipmaker Nvidia are offering different products from Mobileye, which is focused on providing integrated solutions paired with software, Shashua said.

Smaller margins of error are also expected to drive out competitors. "I believe the competition will narrow because when building an autonomous car, the kinds of validations, the kinds of guarantees that you need to give are so severe that very few players can continue this kind of development," said Shashua. "You cannot afford [to have] this car generating an accident."

"There will continue to be some noise in the next two years, but I think in 2020 or 2021 it will start coalescing around a really very, very small number of players," he added.

Shashua, who was selected to light a torch commemorating Israel's 70th birthday in April, has already moved on to his next product, OrCam. The startup that makes the eyewear device, which aids the visually impaired, has already been valued at over $1 billion.