Itochu finds hope in alliance with China's Citic in apparel 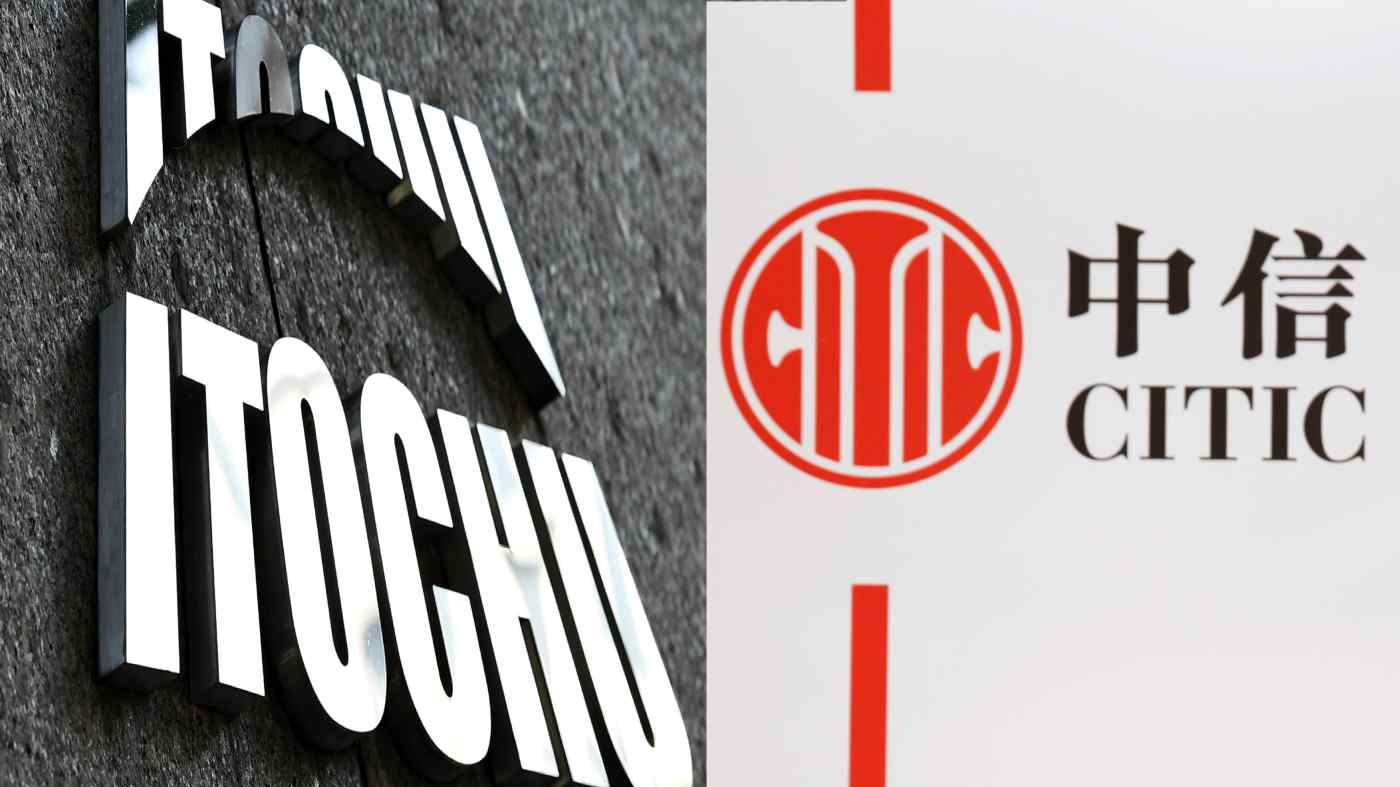 Bosideng, a Chinese transliteration of "Boston," announced that yearly sales through March grew 17% from the previous year to a record 12.2 billion yuan ($1.74 billion), pushing up net profit 23%. "We've been successful even in this sluggish market," a Bosideng executive said.

The company's growth has been fueled by a partnership between its two major shareholders: Chinese financial services powerhouse Citic Group and Japanese trading giant Itochu.

Itochu and Charoen Pokphand Group, a Thai conglomerate, each acquired a 10% stake in Citic for over HK$40 billion in 2015. At the time, it was Itochu's largest investment. The CP Group includes retailer CP All and food giant Charoen Pokphand Foods. Both Itochu and Citic have investments in Bosideng, a Chinese apparel company.   © Reuters

Itochu supported Bosideng's brand development and introduced more efficient sewing factories in the hope of making its Chinese partner more profitable. As a result, Bosideng has morphed into a comprehensive apparel supplier, with sportswear among its latest offerings. For its part, Citic provided funds to finance Bosideng's diversification and expansion. With money and management advice from these two powerful shareholders, Bosideng has taken off despite the pandemic-battered market.

Itochu's road to becoming the "most powerful trading company in China" has been rocky.

While its main Japanese rivals Mitsubishi Corp. and Mitsui & Co. had been gaining ground in the U.S. and Europe, Itochu -- which started as a textile wholesaler in Osaka and was trying to raise its profile in Tokyo -- made the almost inevitable decision to focus on China.

In 1960, China announced that it would reopen trade with Japan but banned companies that had dealings with Taiwanese and South Korean partners from doing business directly with Chinese companies. This hugely impeded Itochu's expansion in China. Then came the Cultural Revolution, which threw China into turmoil. But 10 years later Itochu saw a glimmer of hope as Sino-U.S. relations thawed. Itochu President Masakazu Echigo, recognizing the importance of the Chinese market, at the time said, "Itochu has no future unless it grows its trade with China into its main revenue source."

In the face of skeptical top executives, Echigo traveled to China for talks with senior Chinese officials, persuading them to recognize Itochu as a "friendly trading company" six months before Tokyo and Beijing established formal diplomatic ties in 1972. It was the first such recognition given to a large Japanese trading house and paved the way for Itochu to be among the first Japanese companies to do business directly with China.

In 2010, Masahiro Okafuji became Itochu's president, inheriting a company that had established a solid presence in China, one able to navigate the intricacies of the Communist party-controlled country. Under Okafuji, Itochu pulled out all the stops in its expansion drive. Its partnership with Citic is the most high-profile symbol of Itochu's commitment to the Chinese market.

Itochu has also received support from Thailand's CP Group, which has more than 300 bases in China. But Itochu's investments in the vast market have only now begun to pay off. In addition to its involvement in Bosideng, Itochu has agreed with Citic to jointly establish an investment fund for building data centers in the country. The two companies have also decided to launch a venture capital fund to help Japanese startups find a toehold in China. Citic racked up an average of over HK$46.6 billion in annual net profit during the five years through fiscal 2019. Itochu has gained as much as 70 billion yen ($660 million) of annual investment profit from its 10% stake in the Chinese company.

Still, there has been scant progress in expanding the scope of Itochu's business partnership with Citic, according to Itochu Chief Financial Officer Tsuyoshi Hachimura.

Itochu booked an impairment loss of 143.3 billion yen for the year through March 2019 due to a decline in the price of Citic stock. But Hachimura points out that profits from the investment in Citic have allowed Itochu to restructure and make fresh investments.

President Okafuji remains unfazed by the slow progress. Building a business partnership in China requires a solid, long-term commitment, he said. "Both sides need to make steady efforts to build mutual trust," he said. "That's the way to success."

While its joint ventures with Citic and CP are beginning to pay off, Itochu is facing a potential setback in the troubled convenience store joint venture between FamilyMart and Taiwanese food company Ting Hsin International Group.

The partnership, forged in 2002, has developed into a prosperous convenience store business with over 2,800 stores in mainland China. Charoen Pokphand Group is a major Thai conglomerate, with a wide range of businesses including convenience stores.   © Reuters

But FamilyMart wants to end the venture. It says Ting Hsin ceased disclosing important transaction data around 2012. In addition, for several months it withheld payments for using the FamilyMart brand. In October 2018, FamilyMart Uny Holdings sued Ting Hsin to dissolve the tie-up. Depending on how the trial pans out, FamilyMart may be forced to give up all its outlets in China.

Itochu is not directly involved in FamilyMart's Chinese operations. Meanwhile, Itochu has launched a tender offer to take over FamilyMart. It is thought that its game plan is to use FamilyMart as a conduit to rebuild its China business after the takeover.

The increasing acrimony between China and the U.S. is also casting a pall over the outlook of Japanese businesses in China. If Okafuji is seriously concerned about operations in China, however, he is showing no signs of it. He contends that what seems to be developing into a new Cold War will have "no effect" on the company's operations in China, which he says are focused on "lifestyle-related products." 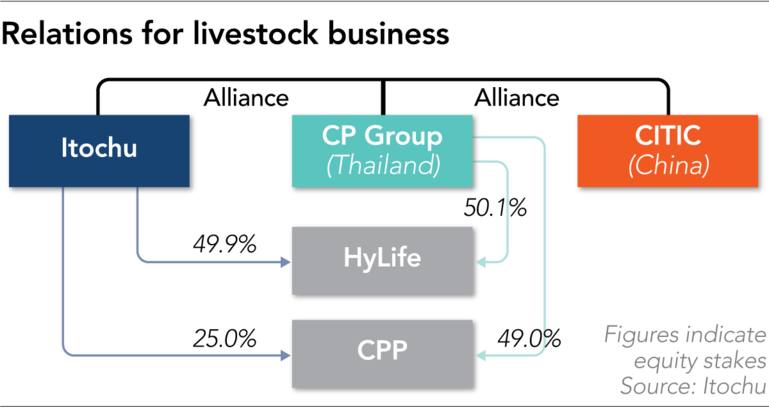 Itochu's annual profits from its Chinese investments have soared more than tenfold over the past decade, to 82.2 billion yen in the fiscal year ended March. Excluding investment profits from its stakes in Citic and CP, and sales of natural resources to China, however, Itochu's Chinese operations are generating an anemic 10 billion yen on average in consolidated net profit.

China's current business environment will inevitably test the resilience and strategic value of Itochu's decadeslong ties with the country.

Itochu had previously hovered around fourth place in Japan's general trading company sector. But in June, it surpassed Mitsubishi Corp. in terms of market capitalization to become No. 1 in the industry, making its overseas business increasingly important for further growth.