JAL scrambles to catch up as bankruptcy protection ends

Carrier is leaner and more stable, but lags rival ANA in growth investment Japan Airlines filed for bankruptcy in 2010. Its protections will end with the close of fiscal 2019.
TOSHIHIRO SATO, Nikkei staff writerMarch 8, 2019 15:25 JST | Japan
CopyCopied

TOKYO -- Japan Airlines is experiencing turbulence. The company received a government bailout after filing for bankruptcy in 2010, but those protections will disappear at the end of this month.

That means JAL will once again be competing on a level playing field with other carriers.  At the same time it will need to make up ground lost during its restructuring period to archrival ANA Holdings.

The company will come under greater pressure as competition with All Nippon Airways, Japan’s largest airline, heats up. ANA will add more flights to Hawaii starting in May, and it will invest $95 million in the parent company of Philippine Airlines. JAL’s time under protection let the company rebuild its balance sheet, but it is still lagging behind ANA when it comes to investing in future growth.

JAL will emerge from bankruptcy protection leaner and more profitable. Since it relisted in fiscal 2013, its net profits are on track to total more than 1 trillion yen ($9 billion) after this fiscal year, thanks to fewer unprofitable routes and depreciation expenses. That is about twice the figure of ANA, which beat JAL in terms of sales.

Profits have swelled JAL's cash reserves and pushed its equity ratio to 57%, much higher than ANA’s at 41%. These buffer the company against external risks, but that security has come at the cost of passing on opportunities for growth.

ANA’s lead can be seen in the two companies’ carrying capacity, measured by available seat-kilometers, the number of seats multiplied by the distance flown. In fiscal 2019 JAL expects to have about 55 billion seat-kilometers, and ANA expects about 66 billion.

The gap is set to grow. When Tokyo’s Haneda airport expands its international routes in fiscal 2021, ANA will come close to 90 billion seat-kilometers. JAL will be at about 65 billion.

JAL was restricted in commissioning planes and investing in new routes until fiscal 2017 as a condition of its protection. But JAL’s carrying capacity is expected to increase 30% between fiscal 2018, when it was freed of the restrictions, and 2021. ANA’s should grow by 40% during the same period.

The company aims to partner with other airlines to serve 500 cities, and it has plans for a long-distance, low-cost carrier out of Narita airport. But as a whole its aircraft count is not increasing much. In fiscal 2021, it will have 236 airplanes, only five more than the previous year. ANA had 302 at the end of 2018.

But it is not necessarily bad that JAL is not growing as quickly as its rival, according to Brendan Sobie, chief analyst at the Centre for Aviation. "Their strategies have diverged, but it doesn't mean that one is more successful than the other." ANA's investments in markets that are becoming more competitive expose the company to more risk, he added. 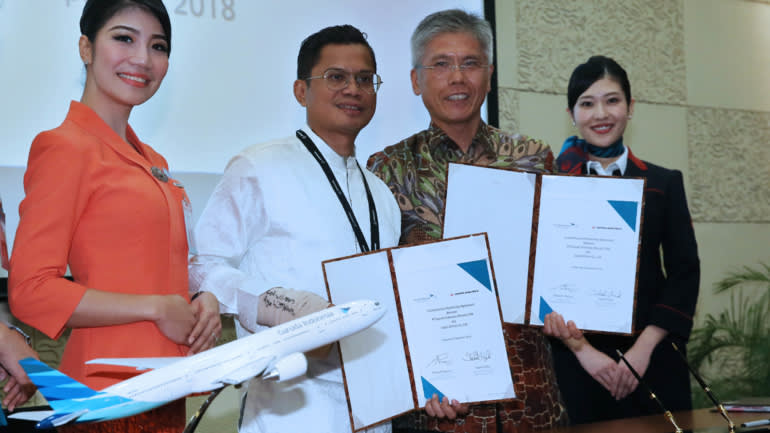 JAL’s resources will soon be further stretched. Its consolidated net profits for fiscal 2020 are forecast to fall 17% to 114 billion yen after accounting for the end of preferential tax treatment that came with its protection. But the company will likely keep its 110 yen annual dividend at the same level.

Many investors prefer JAL because it offers a steady return at a time when U.S.-China trade friction clouds the international environment. But since JAL was relisted, ANA’s stock price has increased by 120%, compared with JAL’s 110%.

“If we can get to a point where we can confirm that ANA’s increase in supply will be accompanied by demand, its dominance in both results and stock price will likely be strengthened,” said Ryota Himeno, an analyst at JPMorgan Securities Japan.

JAL's preference for stability may have roots in its experience in the early 2000s.

The company was hit hard by the Sept. 11, 2001, terrorist attacks on the U.S., the spread of SARS and the Lehman shock. Its equity ratio at that time moved in the range from single digits to almost 11%.

With tensions between India and Pakistan on the rise and reports that North Korea is rebuilding its long-range missile launch site, international incidents could once again cut into airlines' profits. JAL will be better insulated against such shocks, but it will have to play catch-up in ensuring it has avenues for future growth.