Japan and Taiwan companies to gain from China's quick recovery

Market's pull still strong in many industries despite talk of 'exit' 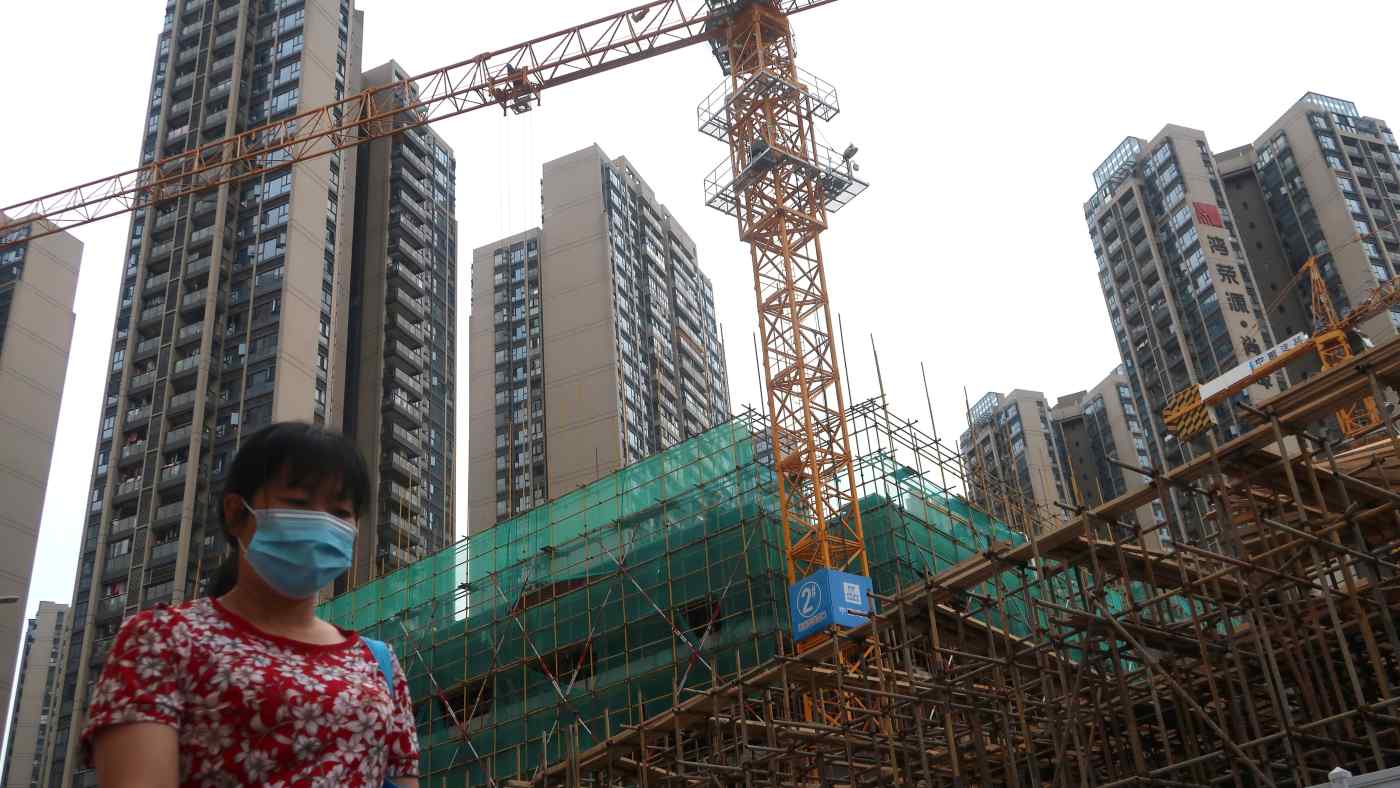 TOKYO/TAIPEI -- Japan and Taiwan, two places in Asia trying to keep their distance from China politically, are finding the country's economic pull inescapable. Japanese and Taiwanese companies see China's rapid recovery as a rare bright spot as the pandemic lingers and continues to sap demand in other markets around the world.

Despite a much talked-about "exit" from China by some, others are staying put. "Demand in China has been strong beyond our expectations," said Hiroyuki Ogawa, CEO of Komatsu, Japan's largest construction equipment maker, in a teleconference in late October.

Last month Komatsu raised its consolidated sales forecast for this fiscal year ending March 2021 to 2.12 trillion yen ($20.5 billion) from 2.07 trillion yen, reflecting strong sales in China. Of the five major markets, Komatsu operates in, China was the only one where demand for construction machinery grew in the second quarter.

Komatsu is far from alone in pinning its hopes on China's recovery. While other countries face a rising number of COVID-19 infections, China has contained the spread of the virus. Economic activity is picking up faster there than in many other countries.

Retailers also see customers in China returning to shops faster than elsewhere. Sadanobu Takemasu, president of Japanese convenience store chain Lawson, told reporters in October that its same-store sales in China have been recovering rapidly since September. "We sense that we have momentum [in China] to achieve the goal that was set before the pandemic, "Takemasu said.

Another Japanese retailer, Aeon, is also optimistic. President Akio Yoshida said that Chinese consumers are moving to "domestic spending," and that the number of customers is growing again, exceeding that of last year.

Fast Retailing, which owns the Japanese casual clothing brand Uniqlo, has also seen a better-than-expected recovery in China since March. It expects its sales and profit to expand through fiscal 2021 in the greater China region.

Tadashi Yanai, chairman and president of Fast Retailing, expressed confidence in the company's business in China, saying that it is "feasible to open 3,000 stores" there, up from 780 stores now. 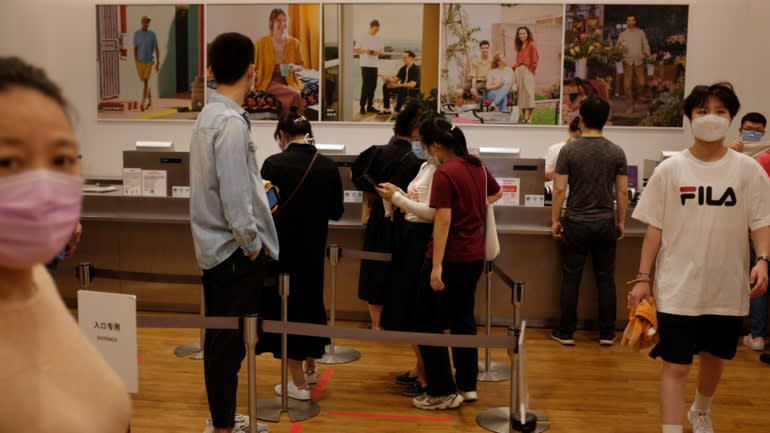 Customers line up to pay for their purchases at a Uniqlo clothing store in Beijing: Consumer spending is bouncing back more quickly in China than elsewhere, as it has contained COVID-19.   © Reuters

"What is happening right now to Japanese companies is very ironic, given Japan's political stance of keeping its distance from China," said Xiao Minjie, managing director at Ais Capital.

The Japanese government has rolled out a 220 billion yen program, widely known as the "China exit" subsidy, aimed at encouraging businesses to build production sites in Southeast Asia so as to diversify supply chains that are overly reliant on China.

But China's economic power, especially amid the pandemic, will continue to lure overseas businesses, said Minjie.

According to the International Monetary Fund, China is the only major economy expected to grow this year, with its gross domestic product forecast to expand 1.9%. The IMF also estimates that China's economy will grow 8.2% in 2021, compared with growth of 5.2% in the rest of the world.

Taiwan, which has close economic ties with China, also feels the growing weight of its giant neighbor.

Taiwan's exports rose 6% on the year, in dollar terms, in the September quarter, with electronic components and semiconductor shipments surging 21%, largely driven by Taiwanese suppliers to Huawei, a big Chinese telecom equipment maker. Taiwanese chipmakers shipped products as fast as possible before U.S. ban on dealing with Huawei took effect in mid-September.

Huawei's suppliers have seen sales jump. Taiwan Semiconductor Manufacturing Co., the world's biggest contract chipmaker, chalked up revenue of $12.14 billion in the July to September quarter, up nearly 30% on the year. 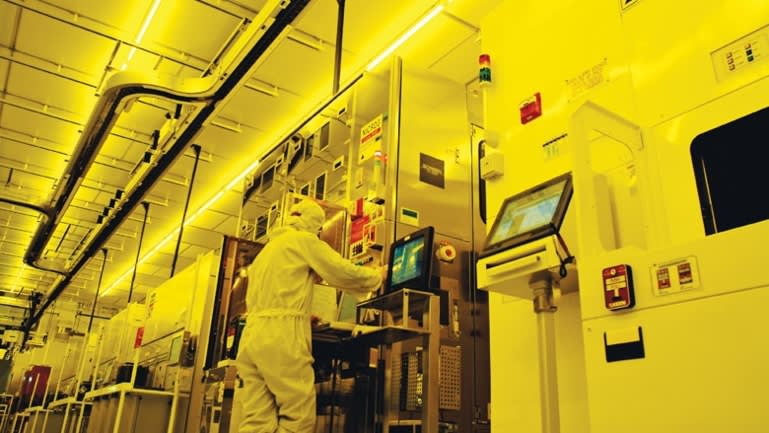 ASE Technology Holding, the world's top provider of chip testing and packaging, saw its net profit climb 17% on the year in the previous quarter, while MediaTek, which specializes in chips for smartphones and other mobile devices, had record revenue for the September quarter, rising nearly 44% on the year.

The story was similar for RichWave, a Taiwan-based designer of Wi-Fi chips. "It was a really dramatic quarter for us. We shipped like crazy to Huawei in August, and then we stopped completely after the middle of September," Kick Huang, the company's general manager for China, told investors on Oct. 30.

RichWave expects more of the same. "Our vacant capacity for Huawei was soon filled up by other Chinese networking and smartphone clients. The demand in the Chinese market is really strong," said Huang.

The Taiwanese chip designer said its business in China has been booming since the U.S. crackdown on Huawei, which prompted the company and the Chinese government to look for alternatives to American tech equipment. RichWave recently set up a subsidiary in China and purchased chip-testing equipment to better meet Chinese demand, Huang said.

The U.S.-China decoupling is expected to continue no matter who wins the U.S. presidential election. However, as the rest of the world struggles to weather the pandemic, "the significance of China as a market will grow further," said Yuji Miura, advanced senior economist at the Japan Research Institute.

Miura said that no other country can replace China in terms of its market, supply chain and industrial clusters. "If you look at the situation coolly and calculate cost-benefit, you can't really rule out making and selling things in China."