US airlines bypass Narita for airports in China and South Korea

NEW YORK -- Japan is losing its luster as the primary aviation hub in northeast Asia.

Major U.S. airlines are scrapping routes to and from Narita International Airport near Tokyo -- the country's main international gateway -- and opting instead for airports in China and South Korea.

Delta Air Lines said in September that it will discontinue its Narita-Guam route, which it has operated with one or two daily roundtrip flights. That route is important for many U.S. military personnel, who travel between Guam, where the U.S. has a large military base, and the U.S. via Narita. The last flight is scheduled for Jan. 8. When Delta suspends that flight, it will urge its customers to use Korean Air Lines' Incheon-Guam route. The two carriers signed a deal in March to allow them to use each other's flights, and passengers will be able to travel to U.S. cities on Delta or Korean Air from Incheon Airport near Seoul.

"From Korean Air's base of Incheon, we can connect to 80 Asian destinations," Delta CEO Ed Bastian said in October when he unveiled the airline's new Airbus A350. He cited the "great limited facilities beyond Narita" as the reason for the shift to Incheon.

Delta is one of three foreign airlines that will be given spots at Incheon's new Terminal 2, thanks to its alliance with Korean Air. The terminal, which is scheduled to open in January, will offer automated self-check-in and luggage-drop services. The terminal will also provide easy transit service, called "transfer cluster," directly linking security screening and amenities, such as showers, restaurants and shops.

While United Airlines has a partnership with Japan's All Nippon Airways and American Airlines has an alliance with Japan Airlines, Delta has no Japanese partner, which means that it has to operate transit flights to other parts of Asia on its own. 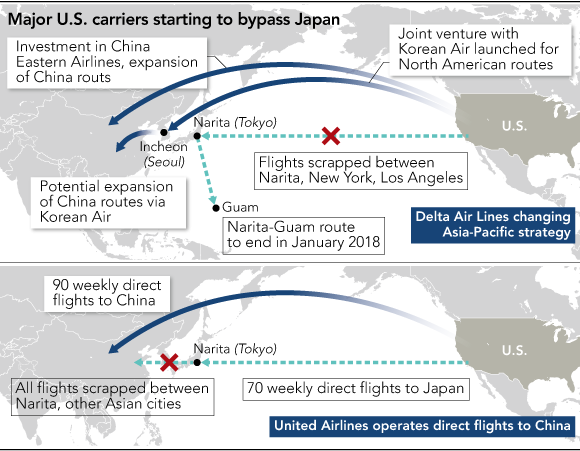 For Delta, there are two crucial elements behind its partnership with Korean Air, according to a senior official of a major Japanese airline. The first is to change the transit hub for flights connecting Asia and North America from Narita to Incheon. Incheon operates around the clock, while certain restrictions and limitations apply on Narita for late-night to early-morning flights.

The second is to bolster ties with Korean Air, which Delta has chosen as its official partner for Pacific flights. Both carriers belong to the SkyTeam alliance, which also includes China Eastern Airlines, China Southern Airlines and Xiamen Airlines.

Delta has steadily been ending flights to and from Narita. In 2011, it operated about 180 weekly flights between Narita and the U.S. and Asia, but that number has dwindled to 76 currently. The end of the Guam route will further reduce its presence in Japan.

The fewer number of Delta flights from Narita is a concern for Japanese business travelers, since Delta is the only airline that operates direct flights from Japan to such U.S. cities as Portland, Atlanta and Minneapolis. Fewer Narita routes will force Delta's customers to travel to the U.S. through Incheon, adding hours to their journey.

Other U.S. carriers are also considering reducing service to Japan.

A United Airlines executive said the company is focusing on direct flights to China as the aviation sector in the country expands. United at one time operated flights from Narita to Beijing, Shanghai, Bangkok, Hong Kong, Manila, Singapore, Taipei and Seoul, but it has gradually cut those routes.

The Narita-Incheon route was discontinued in October, ending United's flights from Narita to other parts of Asia. The carrier now only has codeshare flights with ANA between Narita and Asian cities. From the U.S., it operates direct flights to destinations in other parts of the region.

United also is opening more direct routes to China. In addition to Beijing and Shanghai, it has started direct flights from the U.S. to second-tier cities such as Chengdu and Xi'an.

Airports in Beijing and Shanghai have a limited number of new landing slots, and United wants to take advantage of Chinese economic growth by expanding its operations to inland cities. It now operates 90 weekly direct flights from the U.S. to China, compared with 70 weekly flights to Japan.

U.S. airlines have long lagged behind their Japanese rivals in terms of on-board services on their flights to Asia, but they are catching up fast. Delta launched the A350 on its Detroit-Incheon route this month, after committing to the Detroit-Narita route from October. Its business-class seats have doors for privacy, and in-flight meals have received an upgrade.

Meanwhile, American uses Boeing 787-8 Dreamliners for all U.S. flights to Beijing and Shanghai, and it assigns Chinese-speaking flight attendants and offers fully flat seats in first and business class cabins on all U.S.-China routes.

American Airlines surprised the aviation industry in March when it announced that it would invest $200 million in China Southern, a capital tie-up between the world's No. 1 and No. 4 carriers, respectively, in terms of passenger traffic.

Another unexpected twist: The deal between American and China Southern is a cross-alliance partnership. American is a member of Oneworld, while China Southern is part of SkyTeam. JAL, also a Oneworld member and American's longtime partner in Asia, operates a number of code-share flights, but it appears as if the Japanese airline was left out of the loop in this instance.

American Airlines President Robert Isom stressed that "our networks are highly complementary, with the potential to offer China Southern and American customers an unmatched range of destinations in two critical markets for business and leisure travelers." He added in a statement that the investment to the Chinese airline "will allow us to build a relationship that will benefit our teams."

The U.S. carrier has not been very eager to expand in Asia, but China is an exception. Its latest move on Nov. 5 was the launch of daily nonstop service between Los Angeles and Beijing, marking the third route to the Chinese capital along with Chicago and Dallas.

Jim Butler, senior vice president for international and cargo services, said it is "proud to be the only U.S.-based carrier to offer service between Los Angeles and Beijing," while the new route will provide "more options for business and leisure travelers as well as cargo customers."

While airlines covet landing slots at Tokyo's other major airport, Haneda, due to its close proximity to the city center, it, too, has seen its appeal wane.

Before Japan and the U.S. concluded air transport negotiations in February 2016, Delta lobbied both countries hard to get as many slots as possible at Haneda. But it now seems less of a priority.

"Nothing is decided on landing slots at Haneda Airport," said a Delta official. The airport is expected to open about 50 new landing slots by 2020, when Tokyo hosts the next Summer Olympics. This includes those for international flights, as commercial aircraft will be allowed to fly over central Tokyo.

Even if the three major U.S. carriers get additional slots at Haneda, they may not increase the number of flights at the airport.

Rather, they are likely to move their flights from Narita to Haneda, as Delta has done for its Minneapolis route. The airlines likely will not fly from both Tokyo-area airports to the same destinations, partly because they are skeptical about demand from Japan. But the bigger problem is that Japanese airports are less convenient as regional hubs.

Narita International Airport Corp. President and CEO Makoto Natsume believes the airport's future lies in a planned third runway. The airport operator wants to build the additional runway to create more slots during the hours when transit flights connecting North America and Asia are concentrated, which is crucial for Narita to survive as a regional hub. But no completion date for the runway has been set, due partly to the concerns from local communities over noise pollution.

Meanwhile, Incheon has been steadily improving its infrastructure. Its new Terminal 2 will be exclusively for SkyTeam carriers and designed to enable smooth transits between member airlines.

"Completion of construction of the terminal is in its final stage," said Lee Jae-hoon, a manager at the airport. "Airport facilities are almost done, and luxury brands are installing their stores in the duty-free shops."

Lee said the airport expects the new terminal to draw 18 million passengers a year, expanding the total number of passengers at the airport to 72 million. The new terminal will be easily accessible by express trains, buses and subways, which will arrive directly inside the building. Its security screening process also has been simplified and will be able to screen passengers in three seconds.

But Incheon is keeping a watchful eye on a new airport under construction in Beijing. Once completed, Beijing's Daxing International Airport is projected to handle more than 70 million passengers annually, compared with about 39 million passengers handled at Narita last year.

China's goal is to make the new airport a hub connecting Asian destinations with both North America and Europe.

Compared with these two airports, Narita's actions have been slow. Haneda also will not become a hub because the number of international transit passengers there is roughly just 7% of that of Narita, even after the slots for international flights were expanded.

Japan saw the number of foreign tourists hit a record of more than 20 million for the first time in 2016. The number exceeded that mark faster this year, by mid-September. No completion date is in sight for the planned third runway at Japan's Narita International Airport.

Visitors to Japan from other Asian countries mainly use Narita, which means the airport is handling an unprecedented number of passengers. But transit passengers are another story. The number of transit passengers in the first nine months of 2017 was 3.072 million, a 19% decline from the same period last year. The full-year figure is expected to post five consecutive years of decreases, underscoring how Narita is losing its status as a hub in northeast Asia.

Tourist arrivals to Japan fluctuate depending on the economic situation and exchange rates, but the country will not be able to draw a blueprint for the future of its aviation industry as long as it depends too much on them.

The U.S. airlines' departure is a warning flag to Japan, which still aims to be the gateway to the Asia-Pacific region.