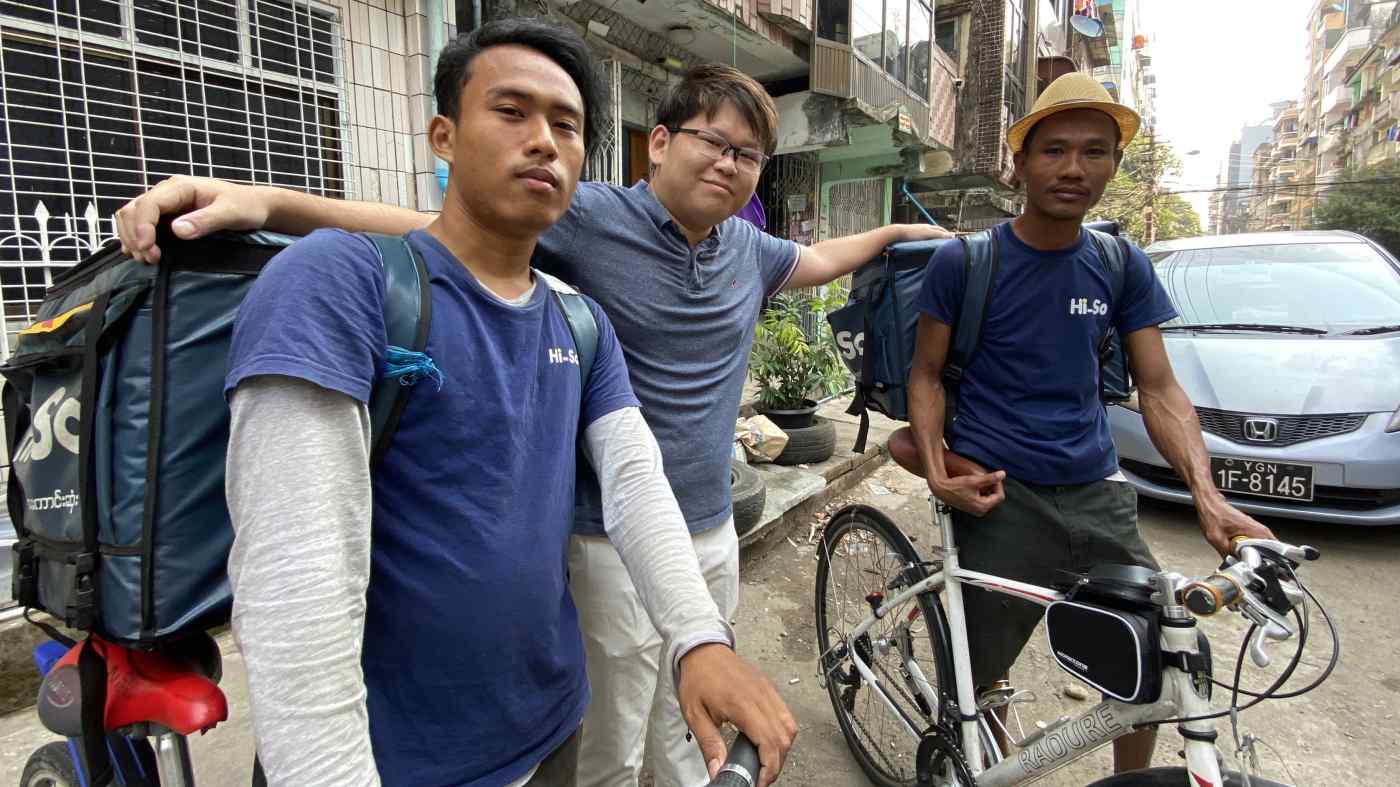 Every morning at 10 a.m., riders on bicycles lugging large insulated bags on their backs emerge from a building on a corner in Yangon, Myanmar's commercial capital. They dart off one by one after they are given instructions by Takada, who developed a smartphone app that does double duty as an online shopping site and as a delivery service.

"I enjoy overcoming challenges," Takada said. "Unless there are obstacles to tackle, people or organizations cannot improve."

The 30-year-old left the security that comes from working for a big corporation to follow his childhood dream of launching his own business in a place many call Asia's last frontier.

Takada is about to face one of his biggest challenges as Singapore's Grab has expanded into Myanmar, setting the stage for a showdown between his company and one of Southeast Asia's largest unicorns, as unlisted companies valued at over $1 billion are called.

"We have a fair chance of competing with Grab in Myanmar," Takada said confidently. "The year 2020 will be the year of delivery wars."

The delivery industry is a new market here, created as a result of the country's rapid economic growth. But logistics has been a challenge in the sprawling city of more than 7 million people, the country's largest, where narrow streets are perpetually choked by traffic.

While Hi-So is certainly has less capital than Grab -- which is worth an estimated $14 billion and provides services including ride-hailing, food delivery and online payments, through a single app -- it has its advantages. Hi-So employs an army of workers who can navigate the streets of Yangon on bicycle, a crucial skill.

Grab, on the other hand, is expanding food delivery service in other markets using motorbikes, but the vehicles are banned in Yangon due to traffic congestion. This means Grab has to build a bike network from scratch in the new market.

Hi-So has been promoting its business by waiving delivery fees, logging 50% increases in monthly deliveries and signing up 15,000 customers to its app.

The company has received strong support of Japanese investors residing in Southeast Asia, who contributed tens of millions of yen to the company. He will use the funding to hire more staff and set up new locations.

The chaos of the city inspired Takada to start Hi-So, a play on the Japanese word haiso, meaning delivery or distributing. When Takada first arrived in Yangon, it was not uncommon for packages ordered within the city to take three to four days to arrive -- if they ever arrived at all. 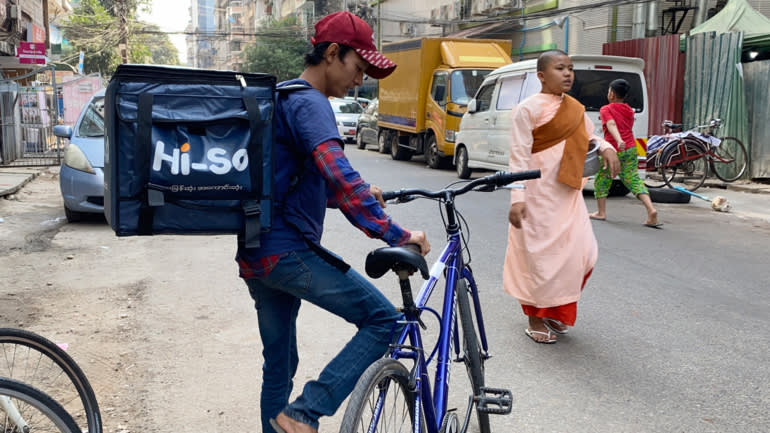 Takada has more 40 employees working at his delivery service. (Photo by Yuichi Nitta)

His business uses GPS systems to locate staff near senders, allowing the workers to quickly pick up packages for speedy deliveries. Hi-So's delivery times, Takada says, take only an hour or two.

When Takada launched the service in December 2018, customers were mostly using it for food deliveries. The second feature of an e-commerce platform hosting a variety of stores from apparel to everyday goods was added last October, turning the app into a combination of sorts between Uber Eats and Amazon.com.

Hi-So was the culmination of a lifelong dream for Takada, who first felt the entrepreneurial spirit in high school. His father was a renowned rakugo storyteller Shofukutei Shokyo, and people expected him to follow in those footsteps. But the younger Takada was more interested in working abroad and business management.

In fact, he still keeps his "life plan," which he wrote in high school, at his new home in Yangon. An entry in the plan reads: Forming a stock company by the age of 27.

"I think I can tell my teenage self that I did it," Takada said.

After college, Takada joined leading Japanese trading house Marubeni where his focus was international business. He grew interested in Southeast Asia, and studied at a top university in Myanmar, where he had visited while in college, with company sponsorship.

Takada was working in Yangon for Marubeni when he started posting Japanese-language teaching videos on Facebook in May 2017, using Htun Khaing, a typical Burmese name, as a pseudonym. His slang-featuring lessons became a quick hit, garnering 170,000 followers and turning Takada into a sort of local celebrity.

One of his followers, a Japanese expat, found out who the man behind the popular videos was and told Takada, "I didn't know [the vlogger] was a Marubeni person." That was when the moment of realization hit him. While Takada, 28 at the time, appreciated the benefits of working for a big corporation, he felt a strong desire to challenge himself and start his own business.

While he had moments of self-doubt, "if I don't do it, I'd think about what-ifs," he said.

Things went wrong right off the bat. Takada hired three young talented staff, but there was culture clash over the direction of the business. The trio complained that Takada did not listen to them and quit after just one month. He knew Burmese people are said to be calm but have a strong ego, and that he had hurt their feelings.

Takada lost confidence of his management skills. But a Japanese executive told him that this sort of thing "happens frequently in Myanmar." Two months later, things started picking up and his business has grown from there.

"Aside from athletes, there aren't many Japanese people overseas whom ordinary people in Japan aspire to be like," Takada said. "I want to show to people back home that I'm doing an exciting job in Southeast Asia."