A JR Kyushu unit runs a high-speed ferry between Japan and South Korea.

FUKUOKA -- Kyushu Railway has never had it easy. But things are looking up for the company better known as JR Kyushu, which runs train services on its namesake island in Japan's southwest. 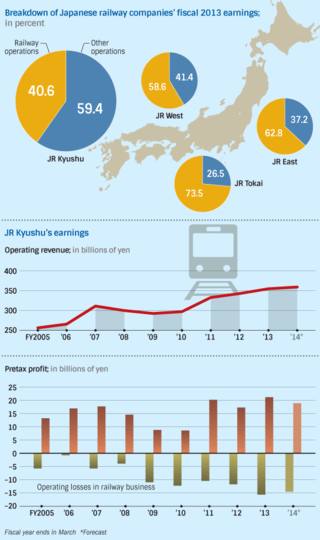 Through trial and error, JR Kyushu has become much more than just a rail operator. Armed with a diverse portfolio of businesses, it expects to list its stock as early as autumn 2016.

JR Kyushu was established in 1987 through the privatization and breakup of Japan National Railways. Things were tough from the start. The new company inherited JNR's assets and operations on Japan's southernmost main island but was immediately saddled with losses worth 28.8 billion yen (around $230 million at the time). Weighed down by money-losing lines in rural areas, the company muddled through alongside JR Shikoku and JR Hokkaido -- poor cousins also born of privatization.

JR East, which serves Tokyo and the surrounding Kanto area; JR Tokai, which serves central Japan; and JR West, which operates in the Kansai region that encompasses Osaka, were all created the same way. But they were blessed with moneymaking lines on the main island of Honshu and have since gone public.

In JR Kyushu's early days, a stock listing was a distant dream. Plans for highway extensions on Kyushu only made the future seem bleaker. But Yukitaka Ishii, the first president of JR Kyushu, encouraged employees to look beyond railways and think like entrepreneurs.

Jack of all trades

The company has tried its hand at numerous businesses completely unrelated to trains: car sales, leasing, mushroom farming, fish ponds and so on. Many of these endeavors ended in failure, but a new path gradually emerged.

The most successful were businesses that tapped into typical railway worker traits, according to Susumu Ishihara, JR Kyushu's third president and now a company adviser. These include an ability to carry out tasks punctually and precisely, as well as a commitment to follow instructions to the letter.

One business that has served JR Kyushu well is the Beetle, a high-speed ferry launched in 1991. A subsidiary runs the service between Hakata, Fukuoka Prefecture, and the South Korean city of Busan. Some ferry employees hail from the railway business.

Another success story is Trandor, a bakery business created in 1992. It now has 42 shops around Kyushu and the western part of Honshu. It soaked up expertise from Andersen, a bakery chain that operates out of Hiroshima.

Baking is "a business that is well-suited to railway workers, since it requires taking the prescribed steps faithfully and on time," a JR Kyushu executive said.

Other companies with the JR moniker operate outside the realm of railways, but most focus on fields such as real estate and retail. JR Kyushu stands out because it has developed products and services of its own.

JR Kyushu Food Service's Umaya -- a restaurant chain with locations in Kyushu, Tokyo and Shanghai -- is another example. 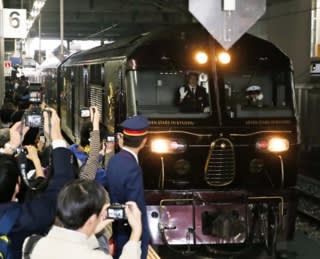 Each of the four existing Umayas in Shanghai targets different clientele. Each eatery's menu is based on communication "with customers to find out what they really want," according to a company official. The chain's good reputation caught Mori's attention.

It was not always smooth sailing for Umaya. JR Kyushu Chairman Koji Karaike was the first president of the restaurant unit. He launched the business and made a triumphant return to the parent company, only to be sent back when the subsidiary later plunged into the red.

Karaike realized that the downturn had been caused by cost cuts. The unit had started using frozen ingredients and precooked food. He changed that policy and turned the business around.

J.D. Power Asia Pacific recognized JR Kyushu's attention to customer satisfaction in a 2014 survey. A JR Kyushu group hotel was ranked No. 1 among hotels with room charges between 9,000 yen and 14,999 yen. Attentive service and meals that feature local ingredients were cited as key factors.

A new hotel opening April 23 in front of Oita Station, in Japan's Oita Prefecture, will feature an outdoor public bath located 80 meters above the ground.

Technically, the company is still under the government's purview, so it needs approval to take out a long-term loan. As a result, it has never borrowed from financial institutions to fund its nonrailway operations. Each year, it also needs to allocate money for maintaining aging JNR rolling stock.

Nevertheless, nonrailway operations now account for nearly 60% of its overall sales -- surpassing the ratios of its main-island counterparts.

There have been some positives in the railway business, too. JR Kyushu leads its peers in the market for sightseeing trips on luxury trains. It also launched bullet train services a decade ago.

Still, the train segment is not exactly thriving. Projections point to a 13 billion yen operating loss in the year through March 2016. With no quick solutions in sight, the company intends to keep strengthening its other operations.

"We want to expand in Asia," President Toshihiko Aoyagi said.