OSAKA/TOKYO -- Japanese instant-noodle maker Acecook aims to increase sales of cup noodles in Vietnam to around 350 million servings in 2022, more than double 2017 levels, as consumers in the growing economy shift to pricier yet more convenient alternatives to bagged instant noodles.

Vietnam is the world's fifth-largest market for instant noodles. Acecook, based in Osaka Prefecture, is the leader there with a market share of about 50%. The bagged variety still reigns supreme in the Southeast Asian country. 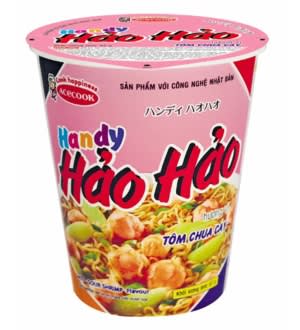 Hao Hao is one of Acecook's top instant-noodle brands in Vietnam. (Photo courtesy of Acecook)

At around 34 cents apiece, cup noodles cost more than twice as much as bagged noodles. But as consumers seek out ever greater convenience, emerging markets have tended to shift to cup noodles. Acecook expects cup noodles to account for 9% of overall sales in Vietnam in 2022, up 4 percentage points from 2017.

The company is considering boosting production capacity in the country. It hopes to shore up sales of its popular Hao Hao cup noodles with television commercials featuring members of the national soccer team.