TOKYO -- Japanese security company Secom said it will begin a new service using autonomous surveillance drones to monitor suspicious cars and individuals on the grounds of factories, stores and other work sites.

The company timed the Thursday announcement to coincide with the implementation of the revised Aviation Law that regulates the use of unmanned aerial vehicles. 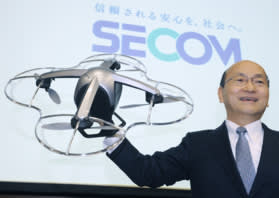 Secom President Hiroshi Ito with a drone developed by the company.

In acting so quickly, Secom is said to be the first company in the world to use autonomous drones for private crime-prevention services.

Secom will offer the drones as an option to its work site security services. When on-site sensors detect a suspicious object, the drone will autonomously approach and capture images from close range and relay the video to the security center.

For this service, Secom has developed its own drone that can travel at speeds of 10kph at heights of 3 to 5m and is equipped with a camera and lights.

The company will charge a monthly fee of 5,000 yen ($40) for this drone option. Customers will also need to pay an installation fee that starts at 800,000 yen and includes a hangar and control equipment.

Secom hopes to win 100 contracts a year with these drones.

The goal is to combine the drones and blimps to offer surveillance services for the 2020 Tokyo Olympics.