TOKYO -- Japan materials group Toray Industries will apply this year for fast-track government approval to sell a cancer screening test that requires only one drop of blood.

The method can screen for multiple types of cancer at once and has a precision rate of more than 95%, according to Toray, holding to the potential to contribute to early detection of hard-to-diagnose forms of the disease, such as pancreatic cancer.

Blood tests for cancers are available in the U.S., but they require tens of milliliters of blood instead of microliters, the company said.

Toray, along with the National Cancer Center Japan and other partners, recently completed a research project for the detection method that began in 2014. If the method is chosen by Japan's Health Ministry for an accelerated review, approval could be granted as early as next year.

The blood tests detect certain microRNA that accumulates in the presence of cancer.

Using its own material and technology, Toray developed a microRNA detection chip that is 100 times more sensitive than other chips. The test can produce accurate results from just 50 microliters of blood, equivalent to one drop, according to the company. 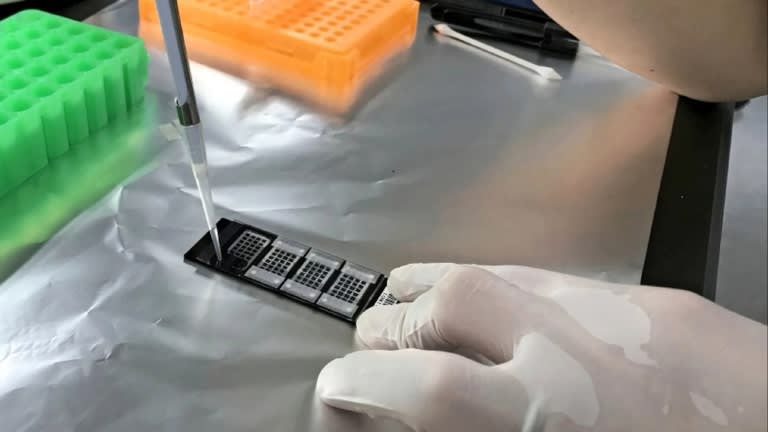 A National Cancer Center Japan researcher works on a method of testing blood for signs of multiple cancers. (Photo by Akihiko Nishiyama)

The research project successfully identified multiple microRNAs, including five types tied to breast cancer and three types connected to colon cancer, among others.

Health care materials remain a small segment for Toray, the world's leading supplier of carbon fibers by market share. Life sciences generated only 2% of the group's sales in the year ended in March, compared with 41% for fibers and textiles.

But the company has made advances in diagnostic testing. Toray's chips that can detect microDNA for pancreatic and bile duct cancer qualified this April for the health ministry's accelerated review program. Instead of the usual 12 to 14 months, the process will take as little as six months.

One round of diagnostic screening for multiple cancers is expected to cost in the low tens of thousands of yen (10,000 yen equals $92).