BANGKOK -- Hundreds of shoppers queued for the opening of Japanese discount chain Don Quijote's first Thai store in Bangkok late last month, eager to experience the outlet's eye-popping array of items, from cosmetics and clothes to appliances and toys.

"I visited [Don Quijote] when I traveled to Japan, and I'm really happy they've opened a store in Bangkok," said 42-year-old Boonyanuch Buaban as she waited in line.

Don Don Donki, as the store is called in Thailand, is among more than 30 other tenants at Donki Mall Thonglor, a shopping complex launched on Feb. 22 by Pan Pacific International Holdings, operator of the Don Quijote chain.

The store is a carbon copy of its namesake in Japan, complete with the Don Quijote theme song blaring nonstop, products piled high in unexpected locations, and in-your-face displays.

When news of the outlet broke in 2017, a local newspaper hyped it as a "long-awaited opening."

The buzz surrounding the store has been generated mainly by tourists returning from Japan, which has become a popular destination for Thais and other Southeast Asians. Don Quijote stores in Japan are now a must-go for souvenir shopping thanks to the variety of products, cheap prices and late hours. In particular, the stores stock everyday Japanese items favored by foreign visitors. 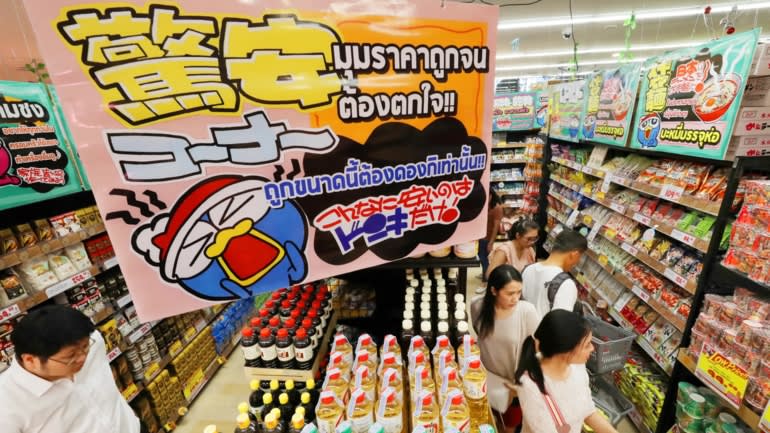 Gaudy in-store ads at the Bangkok store mirror those found at Japanese branches of the chain. (Photo by Kosaku Mimura)

At a news conference in Thailand, Koji Ohara, president and CEO of Tokyo-listed parent Pan Pacific International Holdings, said he wanted to make the store Bangkok's "most entertaining" attraction while offering "the lowest prices."

"We plan to keep prices as low as in Japan -- 50% higher would be the highest we might go," Ohara said. However, tariffs and distribution costs make cost-cutting difficult. Purchasing fresh foods directly from local producers could help lower the cost, according to Ohara.

Donki Mall Thonglor -- which Don Don Donki anchors -- is designed to be a "comprehensive amusement mall" for families and young people. In mid-March, it will open a limited-run theme park featuring costumed mascots, among them Hello Kitty and other products from Japan's Sanrio.

Don Quijote's Thai debut comes as Pan Pacific's Japanese operations sag. Same-store sales fell 1.2% in December -- the first decline in 28 months -- followed by a 0.3% dip in January. The company attributes the consecutive-month fall to the shrinking number of Japanese shoppers.

To make up for this Pan Pacific is looking overseas, with plans to eventually operate about 200 stores in the U.S. and Asia outside Japan. The company wants its foreign operations to account for about 30% of total revenue from the current 10%.

Pan Pacific launched its first branch in Singapore in December 2017 and has since opened two more.