TOKYO -- A venerable Tokyo banquet hall called Happo-En was the scene of a lively awards ceremony on Wednesday. The Pioneers Asia startup event welcomed many companies from Asia and Europe, and Japan's electric wheelchair maker Whill won the main competition among the 24 finalists.

Whill, founded in 2012, has developed an electric wheelchair with modern technology and design that the company describes as a "personal mobility device." In the final presentation, CEO Satoshi Sugie showed a slide that compares the development of the wheelchair and the telephone. Noting that phones have changed completely in the past several decades, he insisted wheelchairs also must be modernized. The company has sold 500 units, he said, and it has more than 40 distribution partners in the U.S. "Since this event has a strong connection to Europe, we want to expand the business network in Europe, where we are planning to expand in the future," Sugie said in the winner interview with the media. He celebrated the award by opening a champagne bottle and scattering the wine on the stage.

Pioneers Asia was meant to help Asian and European startups meet potential investors and business partners. Each session of the event and each room of the venue were designed to aid in networking. Participants moved freely from a keynote speech session room to an exhibition room and networking spaces where they enjoyed casual business discussion over food and drinks.

In addition to the main competition, 13 startups from Asia, Europe and the U.S. presented at the 90 Seconds Pitch stage. The presenters introduced themselves quickly without showing any slides or products. Each had another 90 seconds for short questions from judges involving monetizing strategy, market size, regulation, team members and background. The presentation room was full, with an audience of roughly 200. 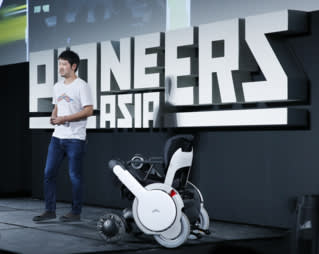 In the exhibition room, 30 startups displayed their technology and services. The technology varied from laundry folding to image recognition and virtual reality.

Pioneers Asia ran from 10 a.m. to 8 p.m., and it welcomed hundreds of people. Kenichi Kuroyanagi, president of a Tokyo-based consulting company, told the Nikkei Asian Review he attended the event to find a new technology that could be used for his current project as well as to find a potential investee for his business partner in Taiwan.

"It is nice that we have such an international startup event in Japan," he said.