TOKYO -- Japanese staffing heavyweight Pasona Group will move core functions at its Tokyo headquarters to an island near Kobe and relocate roughly 1,200 employees as workplace conventions shift in response to the coronavirus epidemic.

The move to Awaji Island in Hyogo Prefecture will occur gradually starting in September, with the transfers due to be completed by the end of May 2024. Group CEO Yasuyuki Nambu has been stationed at Awaji since April as a precaution against the pandemic.

Half of all listed Japanese companies have their home office in Tokyo. That concentration has led to congestion during rush hour, and has created issues in terms of preparedness against earthquakes and other disasters. Pasona's move reflects how the COVID-19 epidemic has triggered drastic reforms within the business community.

The relocation will include about 70% of the 1,800 people in positions such as information technology and back-office management. The company will proceed with the transfers after confirming that each employee is open to resettling. 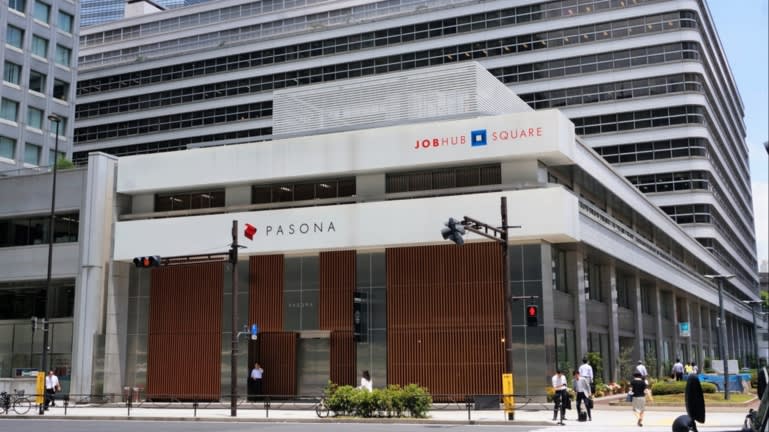 Pasona Group will move 1,200 workers out of its headquarters in Tokyo. (Photo courtesy of Pasona)

Pasona's nationwide network of sales offices, including the ones in Tokyo, will be kept in place. About 40% of the company's employees work from home as a pandemic precaution, and that structure will remain after the relocation.

Nambu, who founded Pasona, is himself a native of Hyogo. Pasona launched farming and tourism operations in Awaji in 2008, and acquired dorms and other buildings in the area from Sanyo Electric, a manufacturer absorbed by Panasonic.

Pasona decided that moving critical roles to existing locations outside of Tokyo offers an advantage from a business planning standpoint. The company believes the disadvantages of working in outlying areas, such as diminished opportunities for information gathering or job recruiting, can be mitigated with the widespread adoption of web conferencing.

The coronavirus pandemic has pushed Japanese companies to overhaul the way they do business. Fujitsu has decided to slash its office space by half in response to the number of employees telecommuting.

Pasona is recommending workstations to corporate clients where resorts double as workspaces. In Awaji, where the staffing group ultimately plans to have more than 2,000 workers, a department tasked with promoting the digitization of work duties has been set up.