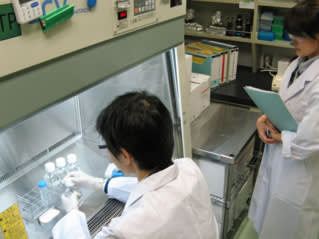 A worker at Terumo prepares medical equipment in Kanagawa Prefecture. The company will set up a production system for making cell sheets for cardiac arrest at its research and development center there in the spring.

Terumo will start producing for sale cell sheets for cardiac arrest, called HeartSheet, in April this year. In September 2015 the Tokyo-based medical equipment company received official approval for producing and selling these cell sheets that are made from human cells.