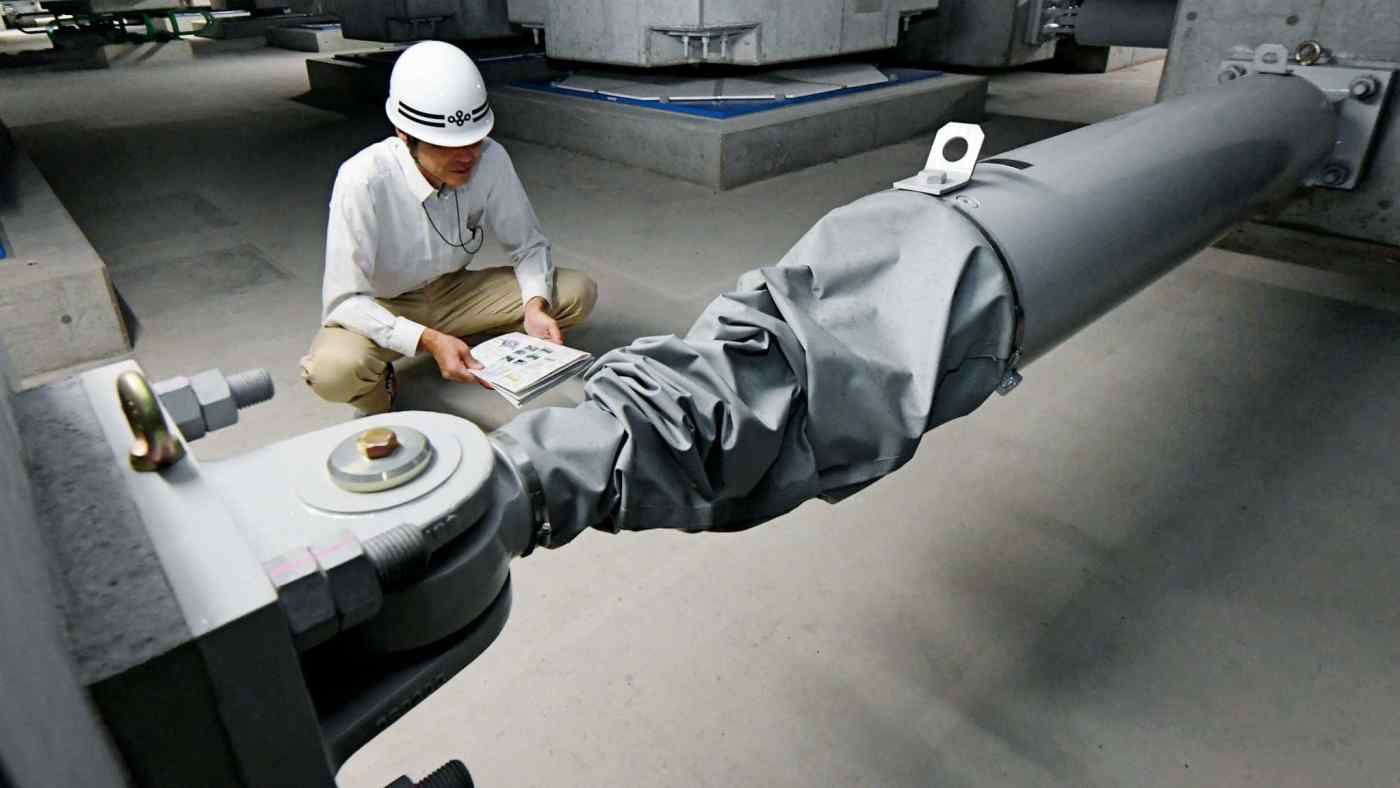 TOKYO -- Independent disaster experts are raising questions over the testing procedures for critical anti-earthquake equipment, after Japan's KYB last month revealed it had falsified test data on its shock absorbers, some of which were exported to Taiwan.

Kohju Ikago, a disaster researcher at Tohoku University, said builders on the earthquake-prone island are almost solely reliant on manufacturers to test these dampers. Having a third party conduct surprise tests could prevent fraud, he said.

Satoshi Nagashima, managing partner at a Japan branch of consultancy Roland Berger, said that manufacturing regulations in general should be changed to prevent further misconduct. Regulations are often not reviewed even when they become outdated or irrelevant, he said. Over-burdened workloads and regulations had led to many of Japanese cases of misconduct in the past, he said.

The questions come as Taiwan's politicians and media step up the pressure on KYB to reveal what buildings on the island rely on its earthquake dampers.

City council members in Tainan, on the island's southwest coast, are demanding that the municipal government publish a list of affected properties in a precursor to possible compensation, local media has reported.

Taiwan is KYB's only export market for these products, and safety concerns have been heightened since a train derailment on Oct. 21 killed 18 people and injured 160 others in the northwest of the island.

The president of Kayaba System Machinery, the unit that made the dampers, said the company had put its production schedule first. "We should have attached more importance to quality," Shigeki Hirokado said.

At Kawakin Holdings, another Japanese damper maker, an executive made a similar admission, saying the company had falsified data in order to meet deadlines.

The controversy has been heightened by the fact that KYB's products are used in a high-rise apartment in Tainan owned by the family of a prominent politician, local media report.

Oil dampers, the products in question, are designed to reduce how much buildings shake during earthquakes. Buildings are not required to have dampers, but they are generally used for higher-grade architecture.

Buildings in Japan that may be equipped with the suspect dampers include the Bank of Japan headquarters in Tokyo as well as parts of Tokyo Station and Haneda Airport, according to Land Ministry documents. KYB listed numerous municipal buildings across the country.

Few Japanese makers of seismic isolation systems export their products, an industry association said. Prices are not competitive, according to the Japan Society of Seismic Isolation, which said it does not track exports.

As for quality testing, manufacturers must fulfill two standards: one set by authorities and the other by clients.

In Japan, the land ministry sets the government standard.

"If dampers don't meet the standard," a ministry official said, "you are not allowed to sell them and need to replace them."

Producers base their products' quality on the government standard, and KYB's products were supposed to be within 15% of the ministry's standard value.

In one case, KYB products used in a building differed by about 40% from the quality standard.

"Quake-damping devices are additional and complementary products," another official said, "so there is no certification for them."

Taiwan has 4,576 quake dampers in use, the government said, of which 90.1% comply with the necessary quality standards. The rest will be investigated, KYB said.

Dampers that do not meet standards may lead to greater shaking during a quake than what is promised by the architectural design of a building. This could cause structures to collide in some cases.

Third-party research into some buildings that use KYB's data-falsified oil dampers shows that buildings can withstand magnitude 6 or 7 earthquakes, the Japanese company said.

Kenzo Taga, a professor of architecture at Kobe University, said the public should not panic about such a large deviation. Manufacturers usually adopt wide safety margins to account for changes due to temperature and aging, he said.

Ikago, the disaster researcher at Tohoku University, said most buildings with faulty devices "would not be immediately dangerous."

Both KYB and Kawakin Holdings plan to replace their substandard absorbers with new products. They are taking no new orders.

The two companies account for about 60% to 70% of the domestic share for oil dampers, raising concerns over whether other companies have the capacity to meet demand in the lead-up to the 2020 Summer Olympics in Tokyo.

Data falsification is not unique to the earthquake shock absorber industry. Hitachi Chemicals recently said that it fudged data for semiconductor material. Last year, a wave of similar scandals in the materials industry began with revelations by Kobe Steel. Automakers Nissan Motor and Subaru later admitted to inspection misconduct.