TOKYO -- Japan's biotechnology company euglena is to start mass production of bio jet fuel and biodiesel out of algae and waste oil, with the aim of being the first company to fuel green commercial flights out of Japan.

The company announced the completion of its refinery plant in Yokohama on Friday. The site can produce 125 kiloliters of bio jet fuel and biodiesel per year, and it plans to raise the production capacity to 250,000 kiloliters by 2025.

The cost of biofuels, which has been one of the major obstacles to their commercialization, is expected to drop from the current 10,000 yen ($88.6) per liter to 100 yen by 2025. This will be close to the current price of petroleum-based jet fuel at about 70 yen.

The company has partnered with aviation group ANA Holdings in the venture, with the aim of fueling their commercial international flights departing from Japan by 2020. Euglena is also planning to offer bio jet fuel to other companies taking off from Japan. ANA will support euglena to develop the airport infrastructure to supply aircraft.

Mitsuru Izumo, euglena's chief executive, said he expected the demand to expand along with the growing Asian aviation industry. "We want [low-cost carriers] and oversea flights to try using our biofuel," particularly from Southeast Asia where bio jet fuel is still rare, he said. 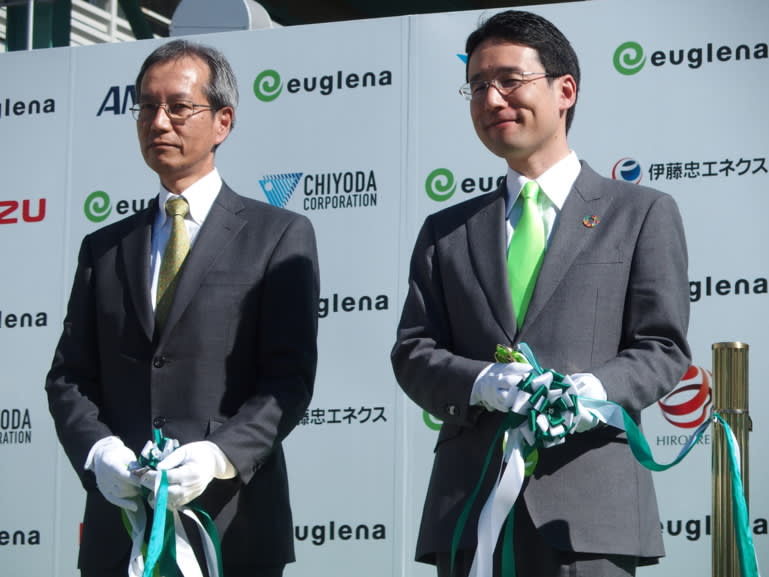 Euglena CEO Mitsuru Izumo (right) at the ribbon-cutting ceremony for the new biofuels plant in Yokohama on Friday.

In Japan, no airline has yet carried out a green commercial flight, while there have been nearly 150,000 flights worldwide, according to euglena. Aircraft manufacturer Airbus has so far conducted programs in places including Australia and Brazil, and partnered with China's Tsinghua University to develop bio jet fuel in China. Airlines including Cathay Pacific Airways and Qatar Airways have supported efforts to commercialize bio jet fuel production.

"Environmental requirements surrounding the aviation industry are being increasingly strengthened," said Chikako Miyata, who is responsible for the promotion of corporate social responsibility at ANA Holdings. With passenger numbers on international flights increasing by 5% every year, improving aircraft and fuel efficiency was not enough to meet industry goals, she said.

Euglena's bio jet fuel is expected to qualify for ASTM certification, an international standard for bio jet fuel, by next spring.

The biofuel will also be used in automobiles. The company has been partnering with Isuzu Motors to test the fuel's quality, which is now on a par with that of petroleum and does not have to be mixed with other types of fuel, according to Isuzu.

Euglena will start selling biodiesel produced in the new refinery from next summer. "The price will be negotiated with clients since it is still in the testing phase," a spokesperson said.

The company has invested 6 billion yen in the development of the Yokohama refinery. Companies including Isuzu, engineering group Chiyoda and energy trading company Itochu Enex have invested in euglena, as well as provided their experience to build and operate the plant. US oil group Chevron also provided technology for the refinery.

One of Japan's leading oil companies, JXTG Holdings, also owns a stake in euglena and is expected to provide infrastructure support as production is scaled up. Izumo said that by 2030, the plan was to create three more new refinery plants to produce 1 million kiloliters of the fuel in total. He said that the locations could be in Japan or abroad.

Biofuel is a renewable alternative to petroleum-based fuels that is made from algae and results in lower greenhouse gas emissions. Algae, like other plants, consume carbon dioxide as they grow. In response to concerns about climate change, the International Air Transport Association set a goal of reducing CO2 emissions by 50% by 2050 relative to 2005 levels.

Euglena has the technology to grow a species of algae called "euglena," and makes its profits largely from the sale of related supplements, food products and cosmetics.

After the announcement, euglena's shares rose by 2% to close at 673 yen on Friday. The share price has been decreasing since its peak in 2013 and a report by Well Investments Research published last year cast doubt on the growth potential of its energy business. The report noted that the share price of TerraVia, a U.S. biotech company that produces biofuel, had been negatively affected when oil prices fell.

Algae is widely considered as a potential source of biofuel because it does not compete with food resources. Japan's IHI also announced last year that it would test development of algae-based bio jet fuel with Thailand's Siam Cement Public Company.

According to Makoto Watanabe, specially appointed professor at the University of Tsukuba, countries such as the Philippines and Indonesia have been "recently strengthening the development of algae-based fuels" at research level.