Company closes in on No. 1 Asahi with new tastes and tie-ups 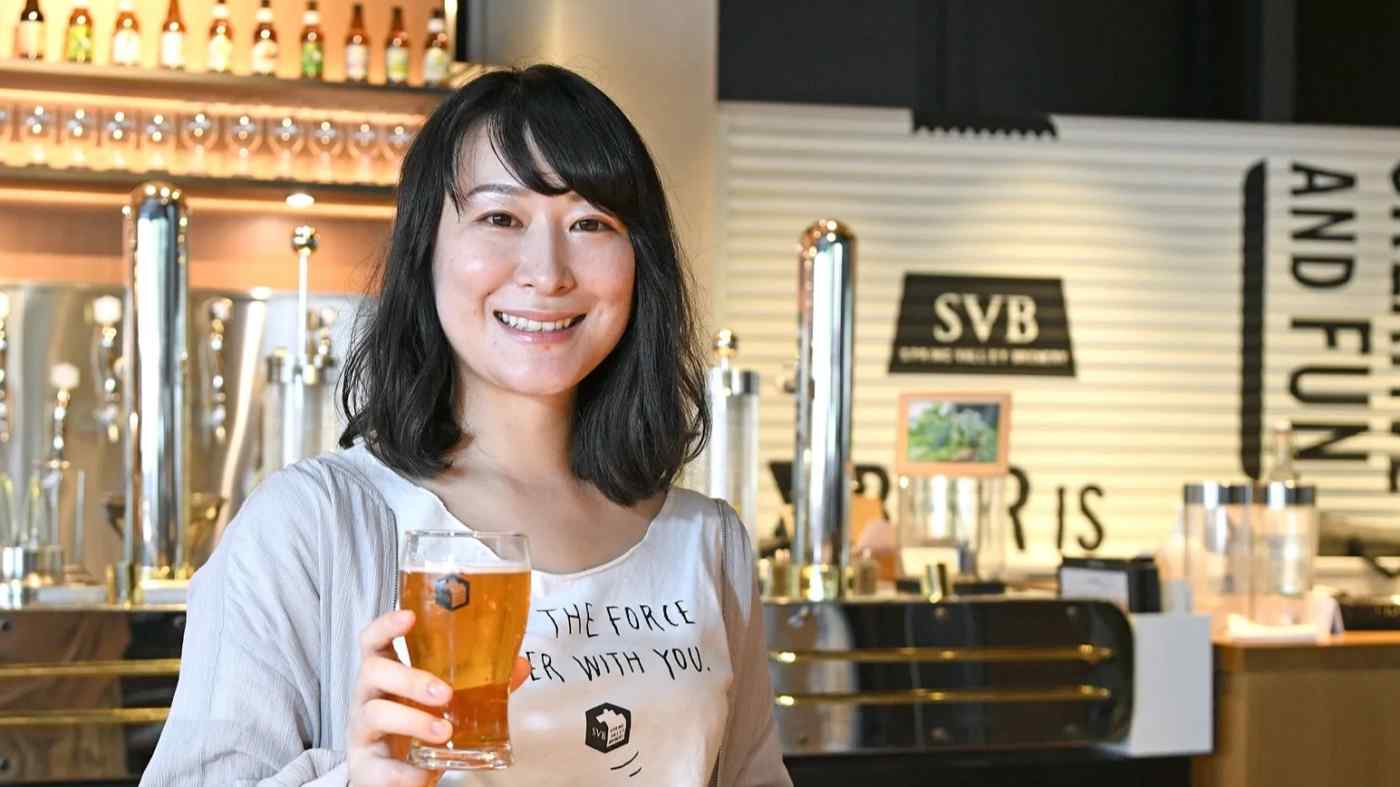 TOKYO -- The first thing that stands out when entering the Spring Valley Brewery restaurant in Tokyo's upscale Daikanyama district is a cluster of transparent brewing tanks, serving up six types of craft beer. Though owned and operated as a subsidiary of Japan's iconic Kirin Brewery, there is no Kirin logo to be seen.

"We want to convey to our customers the joy of beer, not the name of Kirin itself," said Sakurako Yoshino, a founding member of the Spring Valley chain.

The restaurant is an attempt by parent Kirin Holdings to regain the top spot in the domestic beer market from Asahi Group Holdings by tapping into the global craft beer boom, which is threatening the mega brands that have dominated the beer market for years.

Now, with Japan's beer market drying up for 14 consecutive years through 2018, Kirin thinks it may have the right recipe.

After joining Kirin in 2006, Yoshino handled marketing for fruit-flavored canned beverages based on shochu, a distilled liquor made from grain or sweet potatoes. Tiring of this, she told her boss she wanted to market beer, but was turned down. Developing and marketing beer was far less interesting than shochu cocktails, she was told.

Her boss had a point. Back then, there was little to differentiate Kirin's beer from rival brands. Companies competed on subtle differences in taste for several decades, but developing new styles and flavors were barely pursued. Marketing was all that mattered.

Yoshino blamed the major brewers for this, including Kirin. Frustrated with the state of the market and having other ideas, she raised the issue with Toru Wada, one of Kirin's star marketers and about 20 years her senior. At first the two failed to see eye to eye and had heated arguments.

But Wada wagered that craft beer could win people back. "Wine and sake attract consumers because of the pedigree and dedication of the producers," he said. Both Wada and Yoshino felt craft beer could do the same. "The true nature of beer can be found in craft beer, in which brewers can express their own identities," Wada said.

The two eventually concluded that Kirin should start brewing craft beers, but colleagues were not so sure. They said the business would be too small to be successful, and that it would be difficult to stand out from high-end brews. Nearly a year passed with the idea stuck in limbo. This changed in March 2012, when Yoshinori Isozaki took over as president of Kirin Brewery. The new chief had seen craft beer's potential while working in the U.S. and wanted to hear what Wada and Yoshino had to say.

The two, working with colleagues from other departments, pitched Isozaki using a 14-page PowerPoint presentation that Yoshino had created.

"Let's draw a picture of the future," Yoshino began, turning to her slideshow. "In the past, children would draw pictures of futuristic cities filled with high-rise buildings. But today, they draw landscapes with lots of green."

Like children's vision of the future, Yoshino argued, consumer tastes have shifted from industrialized, mass-produced products to natural, handcrafted ones. And as a brewery, it was imperative that Kirin change with the times, she said, emphasizing that "we are expected to create the future of beer."

Isozaki was impressed. Without any discussion of specifics, such as sales targets and budgets, he greenlighted the project on the spot and authorized construction of what would soon be Spring Valley Brewery.

The Wada-Yoshino team was soon joined by colleague and brewing expert Tomohiro Tayama, who was tasked with developing distinctive craft beers. After a career devoted to making bland brews that appealed to many but thrilled few, this was somewhat of a challenge for Tayama.

He employed a method called "dip hop" to make craft beer richer, and brought aboard five other young brewers to make six types of beer for the restaurant. "I want to convey the real joy of brewing," Tayama said.

In April 2015, Kirin opened its first Spring Valley Brewery restaurant in Daikanyama. The chain now has branches in Ginza, Yokohama and Kyoto, and has served more than 1 million customers. 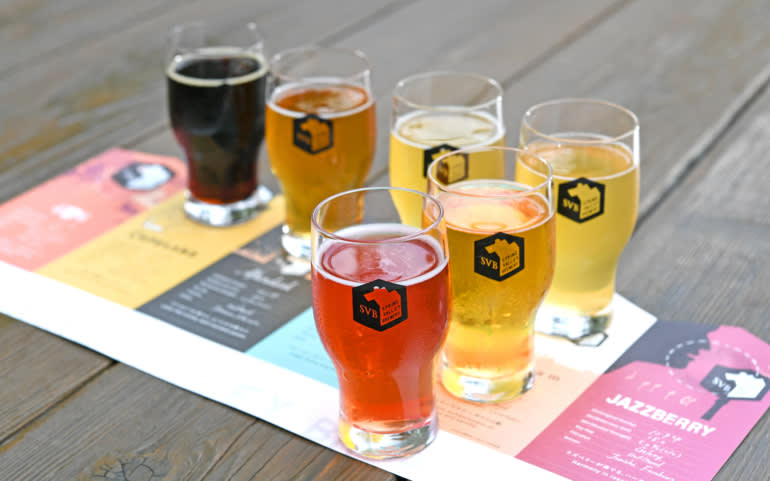 Isozaki has not stopped there. Kirin also developed a compact beer serving machine called Tap Marche. Typical draft servers require floor space for large 10-liter kegs and a dedicated tap for each one. But Tap Marche fits neatly on a counter and serves up to four different beers from 3-liter bottles.

The device has been key in helping Kirin develop a network of craft beer companies.

Kirin surprised the industry by allowing rival beers to be served from Tap Marche. Rather than worry over the dent in Kirin's bottom line, Seiji Yamada, leader of the Tap Marche team, noted that the company's priority was to "convey craft beer's diversity" to Japanese consumers.

"Even managers of craft beer companies were skeptical about the idea," Yamada recalled. "But I think my enthusiasm for pushing craft beer in Japan helped the market, even if it has hurt our sales."

When launched in 2017, there were eight craft beers available for Tap Marche. Now there are 25, with 16 from breweries other than Kirin. The servers are found at more than 7,000 locations nationwide, including beauty salons, coin laundries and fitness clubs. 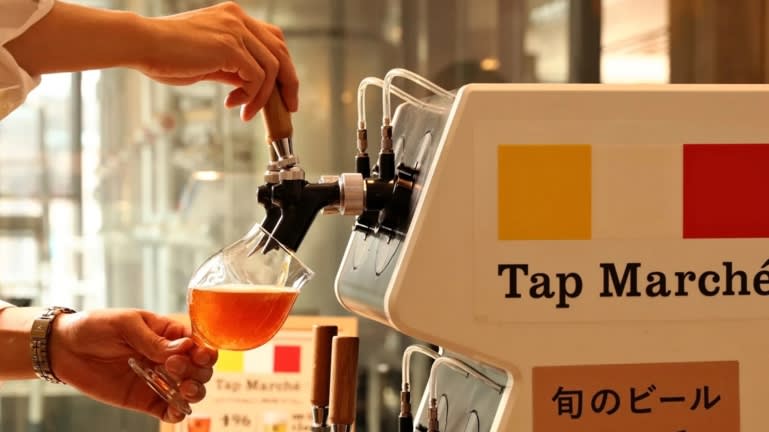 The compact Tap Marche beer server makes it easy for small establishments to offer craft beers, either Kirin's own or those from other companies.

Kirin continues to expand its craft beer business. It formed a tie-up with Yo-Ho Brewing, Japan's biggest craft beer maker, in 2014, and with leading American craft beer maker Brooklyn Brewery in 2016. The U.S. company had been in talks with other Japanese brewers but chose Kirin due to its enthusiasm for craft beer.

Tayama believes craft beer has awakened Kirin's brewing spirit, resulting in its hit product Honkirin, which was released in March 2018 and quickly imitated by other brewers.

In the U.S., craft beer commands a 10% market share in volume and 20% share in value. In Japan, this figure is far less. But Kirin's move into craft beers has narrowed the gap between it and market leader Asahi, which has yet to jump onto the craft beer bandwagon.