TOKYO -- Kobe Steel, reeling from a damaging data-doctoring scandal, will take steps to prevent a recurrence and strengthen corporate governance under its new president.

The falsification of quality data on aluminum and copper products that came to light in October "resulted from a complex interplay of factors including an unbalanced earnings structure and diminished consciousness of quality," Yamaguchi told reporters at a news conference Friday.

Yamaguchi will become the company's first president to hail from its machinery business, a noncore segment. This quality was essential for Kobe Steel in its efforts to rebuild trust in the company.

"I have experience working in steel, machinery and the head office, and so can look at each operation objectively," Yamaguchi said.

Yamaguchi will be tasked with overhauling Kobe Steel's corporate culture, which was seen as a breeding ground for the data tampering. Though past Kobe Steel scandals, such as that stemming from falsified blast furnace emissions data in the 2000s, led to the resignation of presidents, little has been done to address the root causes of such wrongdoing. The company as a whole "was not particularly inclined to dig deeply" into such matters, Yamaguchi said. 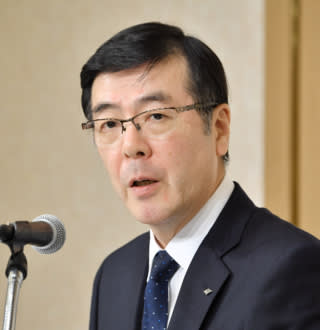 Financial factors also lay behind the latest scandal, as an earnings decline linked to a weak economy made profitability Kobe Steel's top priority. Even as business has rebounded amid rising steel prices, the company remains hampered by a structure inherently less profitable than those of its competitors. Seeking to address this issue, Kobe Steel consolidated its upstream steel operations at facilities in the Hyogo Prefecture city of Kakogawa last fall.

On the governance side, the company is doing away with the position of chairman, instead selecting one of its outside directors to lead board meetings in the hope of encouraging an unbiased perspective.

Kawasaki and these outsiders will help select a new board of directors to carry out reforms detailed in a report on the data-doctoring scandal, such as steps to improve dialogue between workers and management.

Yet other challenges remain, as none of Kobe Steel's operations is competitive enough to lead its field. Kobe Steel has stayed outside the industry realignment, but the shakeup has made rivals such as Nippon Steel & Sumitomo Metal and aluminum group UACJ bigger and stronger.

Kobe Steel is a player in multiple industries, and so "it is hard to envision" the whole company being involved in realignment or mergers, according to Yamaguchi. But the company will consider partnerships and mergers and acquisitions on a segment to segment basis, he said.