TOKYO -- Top Japanese construction machine maker Komatsu's fine-tuned inventory management, which helped the company recover from the Great Recession, faces a greater test as the Caterpillar rival tries to dig itself out of a coronavirus-induced slump.

After the global financial crisis, operating hours tracked on Komatsu equipment took nearly two years to return their previous levels, but during the pandemic, "they have recovered in six months," CEO Hiroyuki Ogawa said last month while announcing April-June results.

Maintaining just the right amount of inventory will be crucial to a swift earnings rebound in an industry buffeted by macroeconomic headwinds. Too much drags down productivity, but too little risks missing out on potential orders once demand rises.

Net profit for the full year through March 2021 is expected to be the lowest since the financial crisis. Komatsu expects demand to pick up in the second half.

Komatsu's centralized inventory system allows the company to track global output of machines and parts as well as sales in one place, so the company can be flexible to changes in demand, materials costs and exchange rates. The goal is to generate as much sales as possible out of a limited stock of equipment. A Komatsu factory in Ibaraki, north of Tokyo. (Photo courtesy of Komatsu)

During the 2008 financial crisis, Komatsu adopted a "zero inventory" strategy for distributors, in which the company retained equipment instead of its dealers. By keeping a tight grip on product movement, it managed to cut overall inventory by roughly 100 billion yen ($945 million) to just under 400 billion yen for the year ended March 2010.

Whether Komatsu can stage a similar turnaround this time is unclear. Its total inventory increased 8% to 866.7 billion yen between the end of March and the end of June, while U.S.-based industry leader Caterpillar saw a 3% decrease and Japanese competitor Hitachi Construction Machinery logged a 3% increase.

But Komatsu's dealerships, particularly in North America, tend to be smaller, and have more of a collaborative relationship with the company.

As demand for construction equipment rose in recent years, some of Komatsu's dealerships began to once again manage their own inventory to quickly respond to customer demands. Komatsu appeared to accept this shift, especially while sales were strong. But demand began slowing last year. 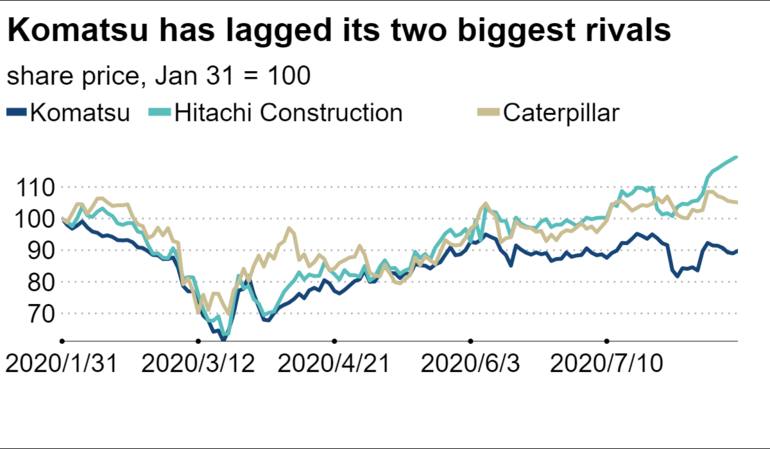 Then the coronavirus hit. Because excess inventory poses a financial risk to dealerships, Komatsu prioritized reducing their inventory over its own, including by taking ownership of some of their stock.

The company faces more challenging conditions than it did after the 2008 crisis. China was the only market where Komatsu saw sales increase in April-June. But "the rise of local players has led to a fiercer price war," a Japanese analyst said.

Komatsu's market share in China has dropped to about 3% to 4% in 2019 from over 10% in 2008, and the company is unlikely to see enough demand there to clear out its inventory.

Piling inventory would affect Komatsu's cash flow. The company's ratio of operating cash flow to sales has plunged to 11% this April-June from the record-high 22% reached in the first three months of the year.

Komatsu stock price has sunk roughly 10% from the beginning of January, compared with Caterpillar's 5% increase and Hitachi Construction's 20% jump. Investors will likely want to see progress on inventory reductions by the next earnings season.