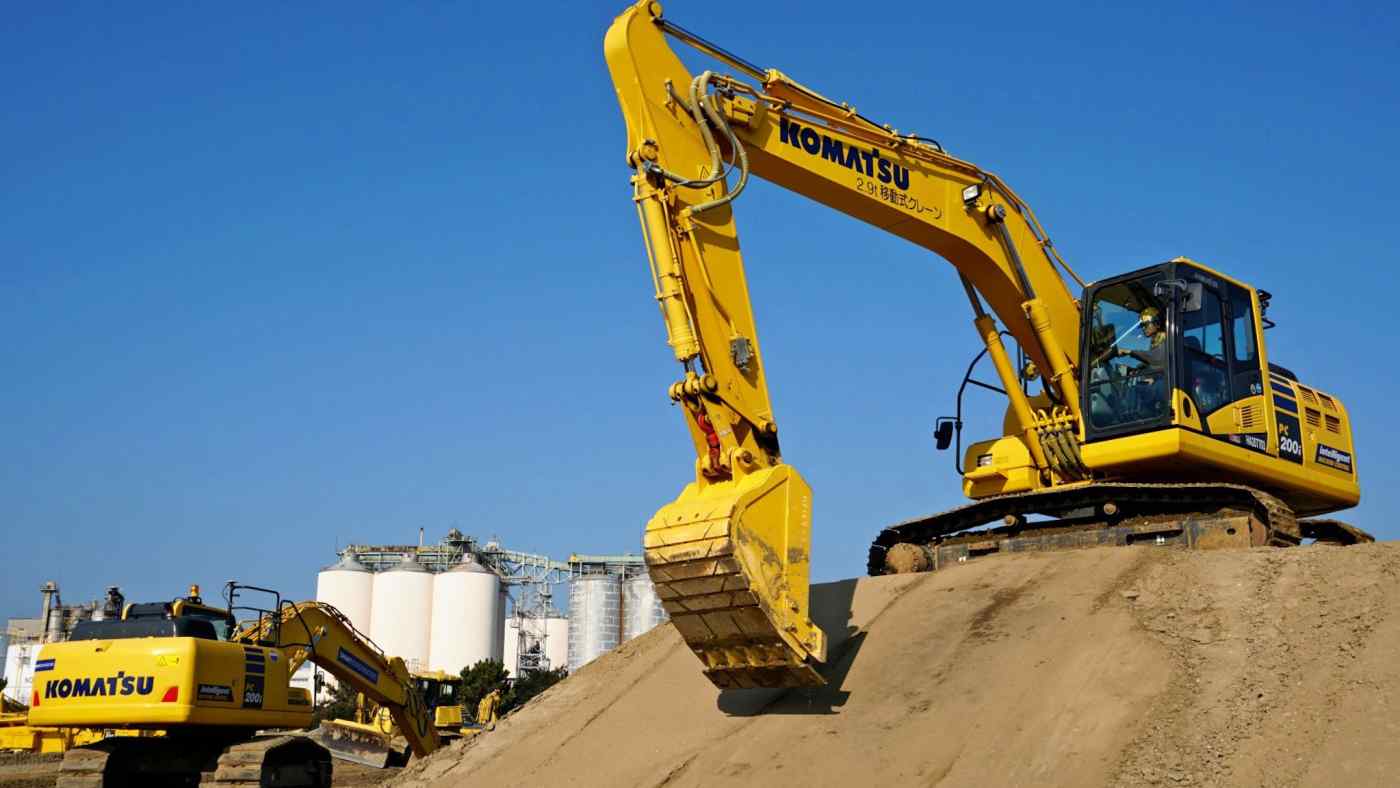 Komatsu's share of the Chinese market for construction equipment shrank to 4% from 15% in just over a decade. (Photo by Annu Nishioka)
HIROFUMI YAMANAKA and SHUNSUKE TABETA, Nikkei staff writersMay 19, 2020 09:48 JST | China
CopyCopied

"Customers come to the factory to take completed excavators," said a representative at a Sany group plant in Shanghai that is running at full capacity and expanding production capacity.

Excavator sales nationwide soared 65% in April to 43,000 units, data from the China Construction Machinery Association shows, reaching an all-time high for the month.

Demand remains strong despite Sany and other competitors raising prices by as much as 10%. A Chinese brokerage estimates that year-on-year growth will continue to surpass 60% for May and June.

But the Japanese company held only about 4% of the Chinese market last year. Komatsu's revenue from the region dropped 23% to 127 billion yen ($1.18 billion) for the year ended in March, amounting to 6% of consolidated sales.

In 2007, Komatsu's market share in the country topped 15%. But Sany and local peers undercut the prices of Japanese rivals by roughly 20%, knocking Komatsu off its perch.

China produces about 30% of global demand for construction machinery, and Sany holds a 25% share in that massive market.

The Chinese company's market capitalization surpassed that of Komatsu in February for the first time. Sany's market value totaled 167.1 billion yuan ($23.5 billion) as of Monday, roughly 30% higher than Komatsu's.

Sany's ample room to expand globally apparently lifted its profile in the stock market. Amid the coronavirus pandemic, the company this spring donated a total of 1 million masks to 34 countries, including Germany, India, Malaysia and Uzbekistan -- a potential prelude to boosting exports, which already yield 20% of Sany's earnings. While Komatsu was being squeezed by rivals, the company distanced itself from the price wars, maintaining a policy of not selling itself cheaply. The Japanese heavy equipment manufacturer looked to make up the difference by leaning more heavily on the North American and Indonesian markets.

North America accounted for 26% of Komatsu's sales in fiscal 2019, up from 22% three years earlier. But the region's slump in housing starts is expected to persist due to the COVID-19 epidemic. U.S.-based construction equipment maker Caterpillar reported a 30% year-on-year decline in North American revenue for the first quarter of the year.

Komatsu plans to rise above the rough patch by banking on its tech-focused business.

"In Japan, the U.S., Europe and other places, we will take digitalization globally," Ogawa said.

The company places its hopes on smart construction, which features survey drones and semiautomated machinery. Komatsu bundles this fee-based service with its construction equipment. This business model has been adopted in Germany, France and the U.K., among other Western markets.

In Japan, Komatsu began providing monitoring tools to clients in April. Devices are attached to equipment bought from other companies, allowing human eyes to check operating conditions remotely. Digging specifications can be input into tablets to streamline construction work.

"If they take advantage of data, there is an expanded potential of growing the high-margin parts and maintenance business," said Akira Mizuno, analyst at UBS Securities Japan. "It will be the key in strengthening the Chinese business."