Komatsu shows off progress in 'energy independence' at plants 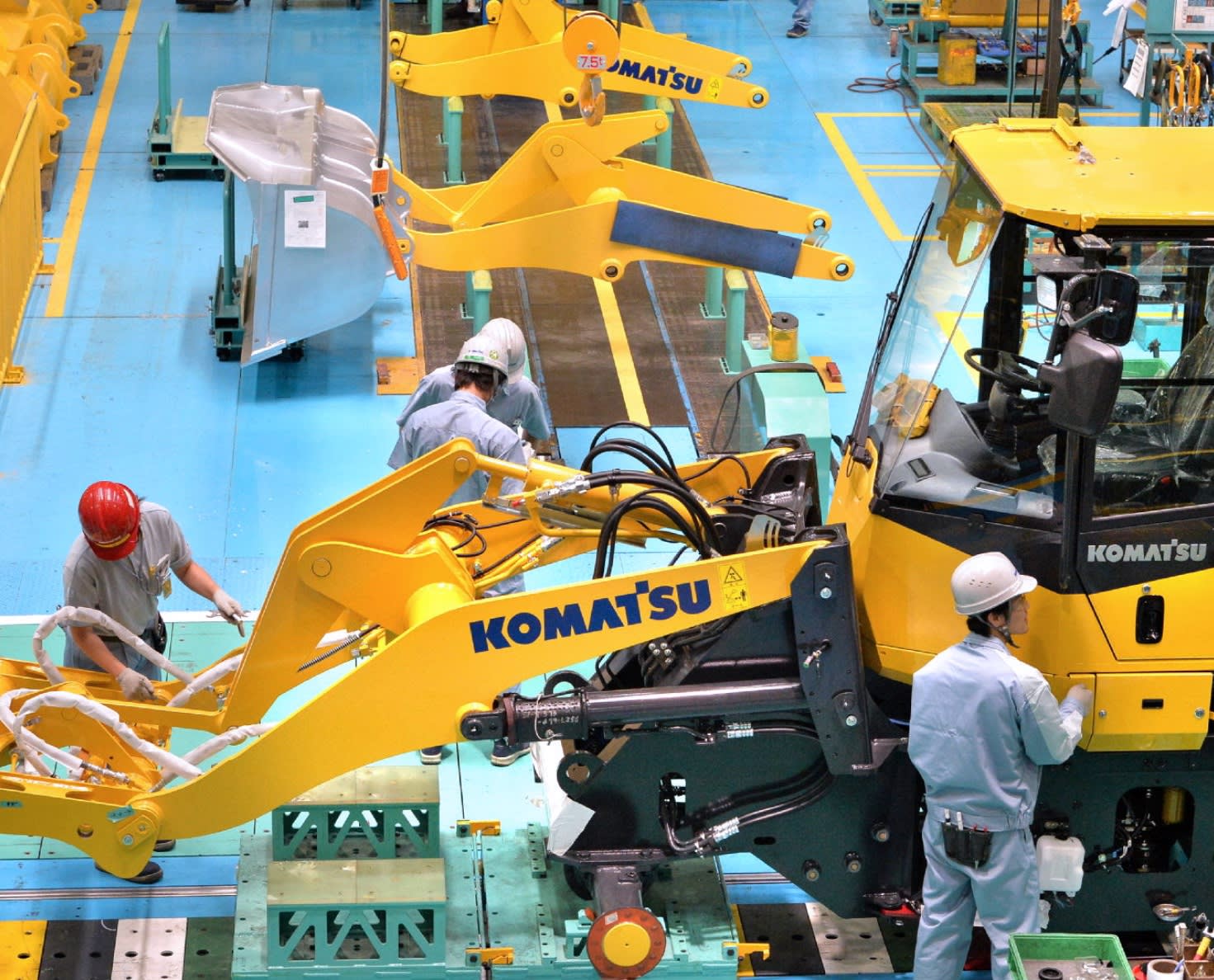 A new assembly wing at Komatsu's Awazu plant was opened to the press on May 30.
YUTA TSUNASHIMA, Nikkei staff writerMay 31, 2014 05:43 JST | Japan
CopyCopied

TOKYO -- After the March 2011 nuclear power plant accident in Japan, major construction machinery maker Komatsu embarked on plans to drastically reduce power consumption at its factories. The fruit of these efforts is evident at a new assembly wing at its Awazu plant in Ishikawa Prefecture.

"The best next-generation plant far and away has been completed," President Tetsuji Ohashi said Friday at a ceremony marking the wing's completion.

The new facility, which will assemble hydraulic shovels and other machinery, was built to consolidate two wings that were more than 40 years old. It has 30% less floor space, but 1.5 times the production capacity, giving it twice the productivity per sq. meter.

The city of Komatsu, where the Awazu plant is located, experienced midsummer-like weather that day. Despite enduring the hottest day of the year with the thermometer outside hitting 31.6 C, inside the new wing was pleasant. Cool air rising from under the floor enveloped workers, effectively air conditioning the plant. Below the floor, equipment has been installed that cools the air through heat exchange using underground water and heat.

The ceiling is 18.6 meters high in areas where cranes operate, so cooling everything is out of the question. But the cranes themselves hold a secret. When parts are lowered by crane to their assembly position, the resulting energy is collected and converted to electricity.

The new building's power source and piping are collected in an underground pit. Consequently, the floor is level everywhere, enabling trolleys to take parts right up to the assembly line. Eliminating the need to use cranes and forklifts for this helps reduce power consumption.

Japan's power supply situation has become increasingly severe since the nuclear meltdown that followed the massive earthquake and tsunami. Industrial electricity rates in 2013 were up 25% from 2010, according to calculations by the Central Research Institute of Electric Power Industry.

With no signs of nuclear power plants being restarted and the weak yen keeping import prices of liquefied natural gas at elevated levels, there is no indication that power rates might decline.

Komatsu has set a goal of cutting domestic power use in fiscal 2015 by half from fiscal 2010. To this end, it plans to spend 30 billion yen to 40 billion yen ($292 million to $389 million) to update aging plants. The Awazu project was the first phase of this. If the company can realize its goal, it will be able to recoup investment in energy conservation in around 10 years.

Komatsu's foreign sales ratio is 80%, but core components such as engines are made entirely in Japan. Meanwhile, the construction machinery market is leveling off due to falling resource prices and slower growth in emerging countries. However, urban development in those countries will help ensure long-term demand growth. In order to introduce made-in-Japan products that can win in the marketplace, improving productivity and slashing fixed costs like power bills are vital.

Komatsu's approach suggests what companies might need to do to keep manufacturing operations in Japan while remaining globally competitive.