TOKYO -- After nearly a decade of political uncertainty, Japan's government has taken a crucial step forward to opening the country for the casino gaming industry.

The House of Representatives on Friday passed a bill on gambling addiction countermeasures, preceding the IR Implementation Bill that is necessary to allow so-called integrated resorts in Japan.

Top executives from the global gaming industry are closely watching developments in their final stretch.

Murren, who spearheads the casino empire, spoke to the Nikkei Asian Review in Tokyo on the same day as the bill's latest advance. MGM is one of several companies seeking a gaming license in Japan.

"Companies and municipalities that have been silent up until now would start moving" should the bill see its passage, Murren said. Three resorts would "generate billions of dollars, making the market vastly larger than Singapore."

If the bill is passed by the end of the current session of the Diet, Japan's Parliament, on June 20, MGM is committed to bidding for one of three licenses to operate integrated resorts.

MGM would give priority to finding local Japanese partners to operate a resort in the country.

It has close relationships with Japanese film studio and theater company Shochiku and electronics maker Panasonic. It has hosted Japanese kabuki spectacles at its Bellagio resort and the MGM Grand in Las Vegas. Both shows involved collaboration with Japanese companies offering projection mappings and other technologically enhanced art. In June, MGM will host a contemporary Japanese art exhibition at the Bellagio.

Murren said the company "has been continuing to build bridges with Japanese people." 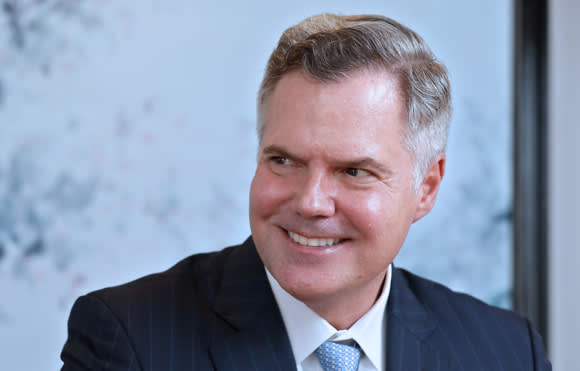 Potential partners in a consortium would prepare for the bidding process, which would be run by local prefectures. The Japanese government would then choose three prefectures to operate integrated resorts.

Murren, who travels to Japan every two months and has visited 23 of the country's 47 prefectures, said he has been in contact with "hundreds of Japanese companies." An MGM resort in Japan "will be definitely designed with Japanese architect, outfitted with Japanese interior designers and artists, and powered by Japanese technology."

He said that MGM has "no preconceived demands on how much equity the company has [for the consortium]."

While the industry has high expectations for Japanese casino licenses, the passage of the bill remains to be seen. Murren said he will wait patiently until "Japanese leaders have believed that it is good for Japanese people."

"I do not want to get ahead of big presumptions to assume that the Implementation Bill is passed until it is," he said. "I am still 56 and will be patient for years to come."

Murren said he has been following the debate in Japan for the past 10 years and sees that the current discussion in Japan has "the great sense of social responsibility that is sadly lacking in other parts of the world." He added that he is "comfortable with the process because we understand concerns for the public good."

The debate over casinos in Japan began in 1999, when the governor of Tokyo at the time, Shintaro Ishihara, expressed his willingness to bring an operator to the capital.

Murren has provided Japanese policy makers, bureaucrats and companies with white papers and information on the potential positive impact of integrated resorts on the Japanese economy, as well as academic research on addictive behavior.

Following a scrap and build process, the Diet passed the IR Promotion Bill, a preliminary step for legalizing the casino business with integrated resorts that includes family entertainment, at the end of 2016.

The addiction countermeasures clarify the division of responsibilities between the national and prefectural governments, and the ruling Liberal Democratic Party is now seeking to pass the IR Implementation Bill, setting out a regulatory framework with the intention of enacting the two bills by the end of the current session.

However, opposition parties are strongly against the Implementation Bill amid fears that integrated resorts will increase addiction to gambling, which is already present in Japanese society in the form of pachinko games.

Murren said he puts importance on the diversity of cultures around Japan, noting that "integrated resorts can integrate with the local region or the entire country" by promoting visitors to use the resort as a hub and explore nearby areas, suggesting that this diversity could be one of the company's economic drivers to attract visitors from neighboring countries.

Restrictions incorporated in the bill would limit casino gaming floors to not exceed 3% of a facility's total size and impose a 30% tax to operators. That would still make resorts in Japan "very economically feasible," Murren said.