While prices of most consumer goods have fallen in Japan in recent years, those of laundry detergent have increased by 2.7% annually.  (Photo by Nozomu Ogawa)
MOTOKAZU MATSUI, Nikkei staff writerJanuary 30, 2019 12:36 JST | Japan
CopyCopied

TOKYO -- With the Bank of Japan's efforts to stoke inflation suffering yet another setback this month, Gov. Haruhiko Kuroda may be ready to turn to unconventional means. He could do worse than to look for inspiration on his next trip to a laundromat.

Retail prices of laundry detergents have risen 14% over the past five years, despite the intense competition in the market for daily necessities.

That is an average yearly increase of around 2.7%, comfortably beating the Abe administration's target of 2% inflation.

Consumers are loath to put up with price hikes for everyday goods, and the key for manufacturers has been to target busy consumers like double-income and single-person households.

"We're offering innovation that makes the impossible possible," said Michitaka Sawada, the president and CEO of Kao, one of the country's main chemical and cosmetics manufacturers.

This month the company announced the launch of Attack Zero, the latest addition to its Attack detergent line. The new liquid contains a cleaning agent extracted from palm oil pomace, which the company claims more than doubles its detergency compared with other Attack products when washing artificial fabrics. It also eliminates certain odors by three-quarters and requires fewer rinses, making it easier to get a washload done before going to work or after getting home.

Another feature is a simple change to the packaging. Instead of having a measuring cap, the bottle has a push down lever that squirts a fixed amount from the nozzle. That may not sound like a dramatic development, but the company sees a less messy, one-handed task appealing to, for example, a busy mum carrying a baby, or a lazy dad holding a smartphone.

Annual global sales of the entire Attack line exceed 100 billion yen ($912 million), contributing to an operating margin of 19% at the company's fabric and home care business.

The brand debuted in 1987 as "the world's first compact detergent," reducing the amount needed per load to one-fourth of conventional detergents. This meant an end to lugging heavy boxes home from the supermarket for millions of homemakers. Kao has since added new features to the line about 30 times.

Attack Zero will carry a retail price tag of around 350 yen for 400 grams before tax, roughly 20% higher than standard liquid clothes detergents.

"Consumers remain inclined to buy high added value in the market for daily necessities, even under deflation," Sawada said.

According to point-of-sale data collected by Nikkei from 1,500 retailers across Japan, laundry detergents were priced at an average 248.5 yen in December last year, and are one of the few sundries that have risen continuously over the period. Boxed tissues and other cleaning supplies, by contrast, have fallen.

While most daily goods manufacturers go through wholesalers, Kao, which holds a 40% to 50% share of the market for laundry detergents, has sales subsidiaries through which it can channel feedback from retailers to help with product development.

Other players have challenged the market leader with their own efforts to make the chore less of a burden. In 2017, Procter & Gamble released a detergent that comes water-soluble film pouches so that it does not need to be measured out, while Lion has released a detergent formulated for indoor drying. 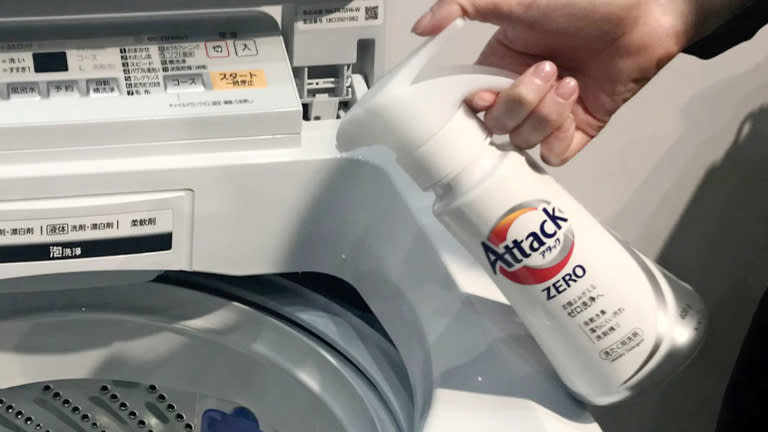 Detergent maker Kao has sought to add value to its new Attack Zero product with an improved formula and easy-to-use bottle.

"Working women and single men often opt for value-added detergents that can save time," said an official at Tomod's, the operator of a major chain of drugstores.

Average prices for most consumer goods have been kept low by the presence of large retailers' own-brand products. In the market for laundry detergents, however, such brands are almost nonexistent.

The ratio of own-brands to total sales at general goods retailers is 30% for products like tissue and toilet paper, 20% for meat and dairy products, but just 3% for laundry detergents.

In the October to December period of 2018, 51% of roughly 1,700 consumer products saw their average retail prices fall from a year earlier, according to Nikkei data. Sales of many products have dropped as a result of "virtual price hikes," whereby the price remains the same but the volume is reduced.

If the lesson of laundry detergent is anything to go by, increasing unit prices by adding value could be the key to ending Japan's seemingly incessant deflation.