HONG KONG -- Lenovo Group, once China's most successful high-tech company, is struggling to find a second growth engine beyond personal computers, after fruitless efforts in the highly contested smartphone market.

In results for the full year ended in March, a loss in mobile business and a one-time charge of $400 million incurred as a result of the U.S tax reform pushed Lenovo into the red. It reported a net loss of $189 million, down from a profit of $535 million a year ago.

Despite the full-year loss, Lenovo's PC and smart devices business showed strong momentum, with revenue growing 16% in the fourth quarter and 8% for the whole year.

Like the mobile business, the company's so-called data center solutions business also reported a pre-tax loss during the year, of $305 million.

The mainstay personal computers business -- which ceded its crown as the world's No. 1 PC vendor by shipments to U.S. rival HP last year -- is showing signs of recovery. The segment's revenue increased by 8% to $32.3 billion, due to solid sales of PCs for business use.

However, Lenovo made little progress in growing its highly anticipated mobile business. With a continued loss of $463 million on revenue of $7.2 billion, down 6% on the year, the management has now decided to cut expenses and shift the focus to data center solutions for future growth.

"The mobile business has failed to meet our expectation," admitted Yang Yuanqing, Lenovo's chairman and CEO, during a press conference in Hong Kong on Thursday. Instead of revitalizing the segment by dedicating more resources, he said the company planned to cut total expense by 30%, so it will not continue to be a drag on group earnings. "In the short term, we are not thinking about growing our market share. We want [the mobile business] to turn around as soon as possible," he said.

However, a former Lenovo executive said there was another reason for Lenovo's struggle in mobile -- the widening gap between the group's practices and the needs of consumers. 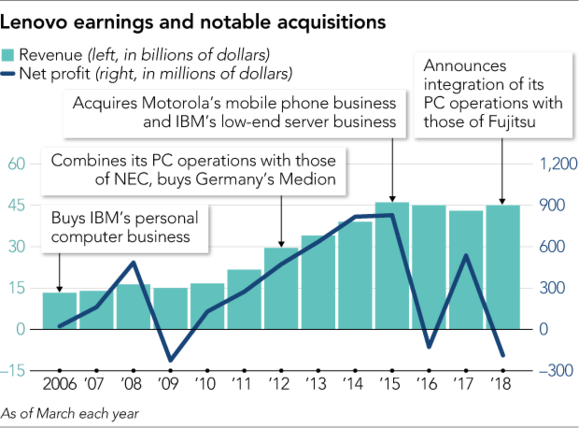 When Lenovo's precursor was founded in 1984 with funding from the state-owned Chinese Academy of Sciences, legendary founder Liu Chuanzhi preached the importance of customer service over technology. This approach in sales and services allowed the company to stay competitive and responsive to the needs of customers.

In 2013, Lenovo for the first time surpassed HP and became the largest player in personal computers, with the acquisitions of the PC business of U.S. computer institution IBM, and German company Medion, as well as consolidating related operations with those of Japan's NEC.

Despite its aggressive expansion, Lenovo rarely sent managers from China to oversee acquired operations abroad, as it placed a strong emphasis on delegating authority to front-line operations. This approach had been considered a secret ingredient of its success.

However, the "customer and frontline first" spirit seems to have faded over time, as Lenovo moved to focus on more big-spending business and government clients, as opposed to ordinary people.

For example, the company assigned its own managers to oversee the Motorola business it acquired from Google in 2014. Motorola's earnings recovery has been slow, and Lenovo's own smartphone business has also lost steam as staff downsizing and leadership reshuffles put the brake on rehabilitation efforts.

The smartphone market shrank in 2017 by 0.1% globally and 4.9% in China, according to U.S. research company IDC. As the competition is heating up, market observers are skeptical of Lenovo's growth potential.

With its market capitalization now less than half the level of five years ago, Lenovo is set to be removed from the Hang Seng Index on June 4, in what amounts to a wake-up call for Lenovo. Management seems to be trying to catch up.

"Honestly, I didn't even know where we sold the computers to," Yang admitted, and vowed to expand the Internet of Things (IoT) network from now on so the company could know its customers better.

It set up a cross-operational department to oversee various products earlier this month, including personal computers and smartphones, to provide more comprehensive services to customers. It is also developing interactive stores that let customers experience its AI-supported speakers and educational tools for children, wearable devices and games. It plans to open 150 of them by the end of this year, including in Beijing, Chengdu and Shenzhen.

In order to restore the focus on customer experience, Yang plans to double the weighting of customer satisfaction in employees' performance reviews to 20% from 10%, according to Chinese media outlets.

However, Lenovo's customer loyalty has faced a challenge from a stronger force -- China's rising patriotic feeling.

Earlier this month, the computer manufacturer faced a public backlash over its 2016 vote on global standards for 5G mobile communications technology. It was accused of being "unpatriotic" as it chose to vote for an option backed by US-based Qualcomm over China's Huawei.

The incident prompted Lenovo's retired founder Liu to issue an emotional statement, claiming the company had always had the best interests of the country in its mind and business decisions.

However, in a response to reporter's question about the rationale behind the vote, Yang said: "Our criteria have always been the best interests of our consumers."