MACAU -- Macau gaming mogul Lawrence Ho Yau-lung has told the Nikkei Asian Review that he gave up control of a casino resort in Russia late last year to improve his chances of winning a license in Japan under the guidance of external advisers.

Ho, chairman and chief executive of Melco Resorts & Entertainment, has high hopes for Japan, though more legislative hurdles remain to be cleared before any casino licenses can be awarded.

"Rarely do you find a first-world country like Japan with the infrastructure, tech and people already in place, yet the potential still so big," he told Nikkei in a recent interview.

If Melco wins one of an expected three licenses against heavy competition from major U.S. operators and Asian rivals, Ho envisages spending as much as $10 billion to build a casino resort in a major city such as Osaka.

"Japan is where we spend the most time these days," said Ho, the son of Stanley Ho, who held the monopoly on casino gambling in Macau until 2002. The younger Ho now travels to Japan every two weeks on average to push its case with officials. 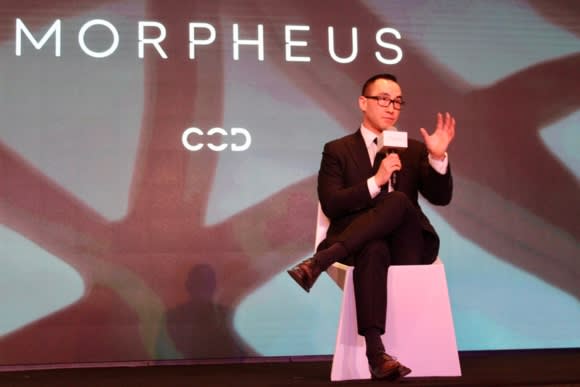 Nasdaq-listed Melco Resorts operates three casino-equipped properties as well as a number of slot halls in Macau and is co-owner of the City of Dreams Manila gambling resort. According to a May 18 Philippine stock exchange disclosure, Premium Leisure, a subsidiary of Belle Corp., Melco's partner on City of Dreams Manila, is in talks with Melco about acquiring a stake in its Philippine unit.

Through Hong Kong-listed parent Melco International Development, of which Ho is also chairman and CEO, he also has interests in a Chinese lottery services and slot machine operations in the Philippines and won a casino licence in Cyprus last year.

Between September and December last year, Ho sold down his entire controlling stake in Hong Kong-listed Summit Ascent Holdings, which in turn is the majority owner of Oriental Regent, operator of a casino resort which opened in 2015 near Vladivostok, Russia. Summit Ascent last year generated 13.8 million Hong Kong dollars in profit on HK$470.8 million in revenue. The 391 million shares Ho held at the end of 2016 would now be worth HK$363.6 million.

Press reports at the time of Ho's share sale linked it to plans by local officials to double gaming taxes, which would have squeezed Summit Ascent's profits. In February, the local government scrapped the tax increase plan out of fears of impacting investments. Hong Kong-listed Nagacorp is also developing a casino hotel in the same zone outside Vladivostok.

In the interview with Nikkei, Ho tied the sale to his Japanese license bid, noting international sanctions against Russia over its annexation of Crimea and its territorial dispute with Japan. "I did not want to do anything that would jeopardize how Japanese regulators see my other activities," Ho said. "Given that my main focus is Japan...I said let's quickly clean that up."

He did not mention, but Russia is also perceived as a relatively unregulated market compared to more established Asian gaming centers like Singapore. In 2015, Melco International's slot machine unit withdrew from Cambodia, another lightly regulated market.

With the Japanese government facing major public opposition to casino gambling, officials are keen to promote the concept of "integrated resorts" where gambling is carefully restricted to a small area. Melco Resorts made an abortive bid in 2005 for a license when Singapore offered licenses for integrated resorts.

"I had high hopes for Russia," said Ho. "If things are more transparent, operate more internationally, I'd love to go back one day, assuming Russia is not enemies with the country that I want to be in."

Though Ho did not mention, Melco International still holds a 5% stake in Oriental Regent and has rights to appoint a director to its board, according to Melco's 2017 annual report, issued on April 26.

Back in Macau, Melco Resorts will complete construction of an additional hotel tower at City of Dreams next month. The 770-room Morpheus is targeted at the so-called "premium mass" market. With a hefty price tag of $1.1 billion and a design by Pritzker Architecture Prize winner Zaha Hadid, Ho is determined to change people's perception of casinos.

"Morpheus is a love letter we send to Macau and China," he said. "We want to build a landmark for Macau, not just boxes and bricks." The exoskeleton-bound building has a rather modern look compared with others in the former Portuguese colony and a gravity-defying pool 130m off the ground. Construction involved 28,000 tons of structural steel and 50,000 sq. m of aluminum cladding.

"We want to show Japan what we can contribute to local culture and the local market using our track record in Macau," he said.

At the same time, Ho will kick off the construction of his Cyprus resort, the 550 million euro ($649 million) City of Dreams Mediterranean, with a groundbreaking ceremony to be held on June 8. Instead of tapping into the Chinese market, Ho said the resort, to open in 2021, will mainly focus on customers from Middle Eastern countries.