TOKYO -- Macau casino operator Galaxy Entertainment Group and Monaco-based Societe des Bains de Mer will strengthen their partnership as they work to obtain an operating license for a casino-resort development in Japan, a market that global gaming companies are focusing on as the country moves to legalize the gambling business.

Michael Mecca, senior advisor and former president and chief operating officer of Galaxy, said "the relationship between two companies is growing in many ways and that we keep exploring new ways to work together."

The chairman and CEO of casino and hotel operator SBM, Jean-Luc Biamonti, said his company is "happy to strengthen the collaboration" with Galaxy, adding that being in Japan is the No. 1 priority.

Since Galaxy acquired a 5% stake in SBM for 42.4 million euros ($50.6 million) in 2015, the two companies have worked together to create synergies in their casino operations.

Biamonti noted that Mecca serves on SBM's board and travels to Monaco every couple of months for meetings, as well as "to meet our local partners that we sponsor." 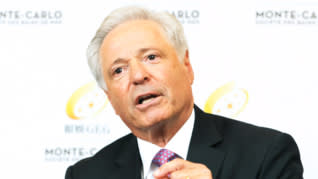 Mecca emphasized the "world-class and iconic integrated resorts" of the two companies.

Mecca emphasized what he described as the two companies' "world-class and iconic integrated resorts, both in Asia and Europe," which will be complemented with Japanese "omotenashi," or hospitality, that will come from as yet unnamed local companies in a consortium that will be formed at the time of a bid.

Following Japan's passage of the so-called IR Promotion Bill in December 2016, a preliminary step for legalizing the casino business with integrated resorts that includes family entertainment.

If the subsequent IR Implementation Bill, which was introduced in the Japanese Diet at the end of April and would allow for three gaming licenses, passes before the end of the current parliamentary session on June 20, the bidding process for local governments to invite businesses will start in mid-2019, followed by the approval of casino operators.

The first integrated resort in Japan is expected to open in 2024.

"After Macau, we all knew Japan would be the next holy grail," Galaxy Entertainment Group Deputy Chairman Francis Lui told Nikkei in a recent interview. "With the experience we have learned in Macau, and in partnership with Monte Carlo, we can be very much part of it."

Galaxy is the largest casino operator in Macau, with 22.6% of gross gaming revenue, according to boutique investment bank Union Gaming. SBM operates the 155-year-old Casino de Monte-Carlo and three other gaming facilities, as well as the Hotel de Paris, in Monaco. Biamonti says SBM is searching for business opportunies with Galaxy in Japan.

Although the government of Monaco still holds a 59.47% stake in SBM, the two companies work closely to bolster their partnership for an eventual business in Japan.

Later this year, SBM will open its brasserie Cafe de Paris de Monte Carlo, similar to the one at its Place du Casino in Monte Carlo in Monaco, at Galaxy's flagship casino resort, the Galaxy Macau.

By strengthening their relationship, Galaxy seeks to capitalize on the brand strength of SBM, whose position as one of the most historic casinos in the world and the sole casino operator in Monaco gives it a strong advantage to Hong Kong-listed Galaxy, which has been operating casinos for just 14 years.

Galaxy has grown streadily and is now the world's second-largest gaming company as measured by market capitalization. The company gives SBM a solid financial base.

SBM has posted operating losses for the past seven years. In the fiscal year ending March 2017, it had an operating loss of 32.8 million euros. The maintenance and extensive renovation of the Hotel de Paris have weighed on the company.

In addition to the 5% stake sold to Galaxy in 2015, the Monaco government also sold another 5% to French luxury retailer LVMH Moet Hennessy Louis Vuitton to recover from its financial woes due to a decline in its gaming revenue.

SBM can develop its inbound business to Monaco by presenting the company outside the country, Biamonti said, with "Asia being an important area to bring new customers to Monaco."