Mahathir seeks to turn Malaysia's Proton around with Geely's help

SINGAPORE -- Proton, founded in 1983 under the auspices of then Prime Minister Mahathir Mohamad, once enjoyed good sales as Malaysia's national car brand. But recent years have not been so kind. The semi-public automaker Proton Holdings has been struggling as local Malaysian consumers have shunned the car, namely citing poor quality. 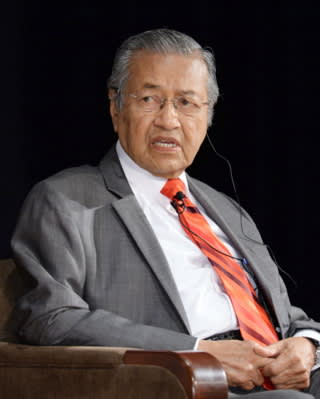 The carmaker has started to fight back. It recently appointed Mahathir as chairman, and it is working to clinch a deal with a major Chinese carmaker. Yet, there are doubts about how much the 88-year-old former prime minister can do to revive Proton.

According to the Malaysian financial daily The Edge on Tuesday, Mahathir has reportedly said there is no need for government assistance for Proton. However, the company's domestic market share has plunged to about 20% from its peak of 50% in 2001. The government effectively requires that Proton be used for small taxi vehicles. Today, this policy is essentially keeping Proton afloat.

Nevertheless, Mahathir appears determined to go without government help. In April, he flew to China with Syed Mokhtar Al-Bukhary, who runs the Malaysian conglomerate DRB-Hicom, which owns Proton. The two met with Chinese political and business leaders. According to local media, Mahathir at the time started crafting a partnership deal between Proton and Chinese automaker Zhejiang Geely Holding Group.

In mid-May, he became Proton chairman after the company formulated a strategy for revival through a partnership with the Chinese carmaker. At the end of May, current Malaysian Prime Minister Najib Tun Razak acknowledged that the partnership negotiations were making headway.

A matter of quality

Specifics of the deal with Geely have yet to be disclosed, but Najib hinted at the possibility of Proton manufacturing Geely-designed vehicles.

Proton's strongest selling point has been the low price of its vehicles. But, as one Malaysian woman in her 20s put it, Protons are low-quality, and this is keeping customers away.

Geely owns Sweden's Volvo Car Group. Mahathir wants to use this connection to produce Protons that can measure up to global standards. He characterizes Protons as cars for the Association of Southeast Asian Nations, and envisions that the company will export its vehicles to rapidly growing countries in the region.

Mahathir is looking both to recapture a dominant share in the domestic market and to raise Proton's profile globally. This mirrors the company's original strategy used when Proton was founded.

Market players, however, have not been too enthusiastic about these announced plans. Share prices of DRB-Hicom have been falling steadily, even after the news of Mahathir's appointment as Proton's chairman. The company has not disclosed Proton-only earnings, but DRB's automobile segment has continued to post losses.

Lucius Chong, an analyst at the Malaysian bank CIMB, is doubtful about Proton's long-term profitability. Chong noted a host of challenges Proton faces, both at home and abroad.

For one thing, it is still uncertain how much of an upper hand the company can get in the negotiations with Geely. The Chinese carmaker has just started the joint vehicle development with Volvo. This means it is still unclear if Geely will be able to supply competitive automobiles to Proton anytime soon. Furthermore, there is a possibility that Geely might not agree to have Geely-designed cars under the Proton name.

For Proton, another important issue is how to go about regaining the loyalty of consumers at home. Technological development, Chong said, still remains a challenge for the company.