Aim is to be a 'top five global scale player,' edotco says 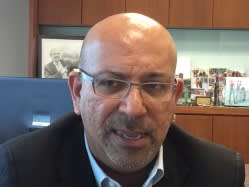 The group is seeking growth by strengthening its foothold in the six countries it already operates in, tapping the vast pool of talent and the technological prowess of its Japanese partner, Innovation Network Corp. of Japan.

"This is a business of scale," Suresh Sidhu, edotco chief executive said in a recent interview.

The group is emerging as the largest independent tower company in Pakistan after it recently scooped up Tanzanite Tower for $89 million and Deodar for $940 million.

Both deals, sealed within three months, will add 13,700 towers to its portfolio, raising its total assets to 32,000 towers. Upon regulatory approval within the year for the Deodar buy, edotco, which also manages 8,000 towers on behalf of clients, will become the second largest tower operator in multiple countries, after American Tower Co. 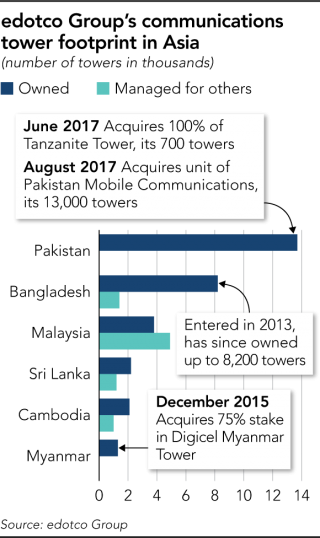 Established in 2012, edotco has piggybacked on its majority shareholder Axiata Group's first-mover advantage in South and Southeast Asia. Except in Myanmar and Pakistan, it operates in the same markets as Axiata -- Bangladesh, Cambodia, Malaysia and Sri Lanka, providing services including tower leasing, transmission, operation and maintenance of mobile telecommunications companies.

edotco's tower business has become significant enough that its earnings will be published in Axiata's accounts in the next one or two quarters. Its success, Sidhu said, hinges on its presence in markets that are relatively new to the tower business, allowing the company to share expertise, from areas like regulatory frameworks to operations.

"We are good in emerging and frontier markets," said Sidhu.

In Pakistan, edotco's immediate task is to consolidate operations in Deodar, a unit of Pakistan Mobile Communications, the country's largest mobile operator. Mobile penetration in the country is about 73%, considered low compared with mature markets such as Malaysia with 134%.

With a population of nearly 200 million, the coverage ratio is 3,000 to 4,000 people per tower, against Malaysia's under two per tower. As such, edotco will increase the number of towers as Pakistan rolls out fourth-generation technology into rural areas.

"The ambition is to be a top five global scale player," said Sidhu. That means focusing on expanding organically in the six countries where it operates, serving primary mobile operators and courting new customers at the same time. It is also harnessing the diverse talent and expertise in each market, exchanging ideas about the challenges each face and focusing on deploying the right staff for the right jobs.

For the latest technology in tower communications, edotco turns to Innovation Network Corp., a public-private consortium that includes Asahi Kasei and Mitsubishi Corp., for ideas.

"They are not here to tell you what to do but to open your eyes to what's out there," said Sidhu of his Japanese partners who have board representation.

edotco said it would soon test lightweight devices from a Japanese maker on wind turbines in Bangladesh. Nepal and Indonesia, the two markets where Axiata has a presence, could be edotco's next targets.