US burger chain offers lower salt and oil, menu items with no beef or pork McDonald's offers numerous vegetarian and other localized menu items in India to cater to customers with religious dietary restrictions.

MUMBAI -- McDonald's is offering healthier menus in India, in an effort to pull in more health-conscious consumers.

The U.S. burger chain has cut back on sodium in french fries and other menu items by 20% and oil content in mayonnaise by 40% compared to conventional products. It has also stopped using artificial preservatives in its patties.

On a recent April weekday after 1 p.m., a McDonald's store in Mumbai was packed with students and businessmen from nearby companies. In addition to McChicken, which is popular in many parts of the world, India-only products are selling well, such as Veg Maharaja Mac, a vegetarian burger containing no animal products, and McAloo Tikki, a potato and peas patty with special Indian spices coated with breadcrumbs, served with sweet tomato mayo, fresh onions and tomatoes on a regular bun.

Westlife Development, an operator of McDonald's franchise chains in west and south India, has made its menus much healthier. It slashed the level of sodium in french fries, chicken nuggets and sauces by 20% compared to conventional products. With reduced oil content in its mayonnaise, calories and fat per serving have declined as well.

Dietary fiber contained in patties has been increased by 20-25% compared to conventional products. McDonald's has replaced flour, egg and vegetable wraps with whole-grain ones that contain more dietary fiber, vitamins and minerals. India is one of the world's most undernourished countries, but obesity has become a serious problem due to rising income levels and other reasons in recent years. According to 2016 data from the World Health Organization, 19.7% of people aged 18 or over in India were either overweight or obese, up 5.5 percentage points from 2005. Obesity has been increasing particularly in urban areas, where the middle class is growing. 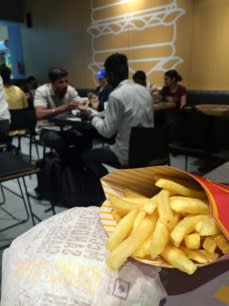 McDonald's India has cut the level of sodium in french fries and other menu items.

Westlife started operating franchise stores in 1996, and operates about 270 stores in 37 cities in India's 10 states, including in the western state of Maharashtra and in the southern state of Kerala. In India, where there are many vegetarians and more than 90% of the country's population are Hindus, who do not eat beef, or Muslims, who do not eat pork, the company has taken different measures from other countries.

It offers vegetarian menu items cooked in a different kitchen from the one for regular menus. In these kitchens, no beef or pork is used. The company plans to increase the number of restaurants offering healthier menus up to 500 over the next five years.