TOKYO -- A plan to merge the personal computer businesses of Toshiba, Fujitsu and Sony spinoff Vaio has been scrapped. The trio failed to come up with a growth plan for after the integration, despite hopes that with over 30% of the Japanese market between them, a single entity would be in a good position to compete overseas.

As the global PC market continues to shrink, the once-mighty Japanese electronics giants continue to struggle.

"After all that talking, we still couldn't reach an agreement," said one frustrated negotiator. The three unveiled the integration plan in December last year, aiming to launch a merged company as early as April. "It can't be helped. We are back to square one," the negotiator said.

PCs, composed of some basic software and standardized components, have become commodities. There does not appear to be much room for creativity in terms of clever new functions. "It is an industry where you compete to procure parts as cheaply as possible and assemble them at the lowest cost," said one industry insider. Globally, China's Lenovo Group and two U.S. companies, HP Inc. and Dell, together control over half the market.

One of the aims of the three-way merger among the Japanese PC makers was to give them the scale needed to battle those rivals.

Last October Fujitsu revealed its midterm business plan, saying it would focus on information technology services. In February, it spun off its PC operation, unloading a business which, including mobile phones, was expected to log a 10 billion yen ($92.6 million) operating loss in the fiscal year that ended in March. 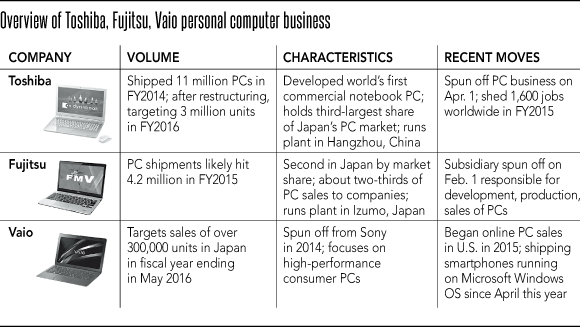 Integrating the PC unit of Toshiba, which shipped 11 million units in fiscal 2014, "will give us economies of scale," a Fujitsu official had said. Toshiba, meanwhile, was considering carving out its PC unit following an accounting scandal. The deal also appeared lucrative for Vaio, as it would lower procurement costs for its mainstay high-end PCs.

But bringing the manufacturers together has proved hard. Toshiba's PC unit plunged into the red with a 27.6 billion yen operating loss in fiscal 2014. The company decided at the end of 2015 to cut PC shipments to 3 million units by March 2017. As a result, the combined entitity would have a global market share of just under 3%.

The PC market is shrinking as smartphones and other devices grow ever more prevalent. Even Lenovo and HP have cut payrolls repeatedly. "The integration may have provided a respite for the first few years, but there were no further plans for growth," said a person familiar with the failed merger talks.

The plan also collapsed because of disagreements over how to combine assets. Toshiba and Fujitsu own PC plants, but Japan Industrial Partners, which owns about 90% of Vaio, was wary of taking on large new assets. JIP balked after Toshiba and Fujitsu hesitated to close those plants or convert them to other uses.

"Although the outlook is grim, we should not rush our decision," a Toshiba official said as the negotiation dragged into April without progress. As part of the company's restructuring plan, Toshiba had decided by March to sell its medical equipment subsidiary and home appliances unit. The streamlining allowed Toshiba to avert an immediate financial crisis and "provided some relief," the official said.

The three parties found themselves at cross-purposes: Toshiba was no longer in a hurry to finalize the deal, Fujitsu was averse to drastic structural changes, although it wants to let go of its PC unit eventually, and JIP was hoping to retain as few people and assets as possible in order to increase the company's value in a future sale.

Still, the trio agrees that something has to change. Earlier in April Toshiba spun off its PC unit. Now it will have to consider a cross-industry merger for the unit or selling it as quickly as possible. Meanwhile, Fujitsu is considering pushing its recently spun-off PC subsidiary out of the group by selling it, to or merging it with a foreign PC maker or contract manufacturer.