China's state-owned Tsinghua Unigroup has strengthened its presence in the memory market, enough so that Apple is considering procuring NAND flash memory from subsidiary Yangtze Memory Technologies. Unigroup made an unsuccessful $23 billion bid to buy Micron in 2015.

"To be a meaningful player, you need leading-edge technology, you need intellectual property, you need a large scale of production, you need product design, product specifications that meet customer application requirements, and you need quality," the Micron chief said. "All of this requires a tremendous amount of capability, which other companies have built over the course of many decades."

Mehrotra also stressed the importance of intellectual property such as patents. "Large global customers want to make sure that the products that are designed have proper IP, and China does not today have IP rights for DRAM or NAND," he said. 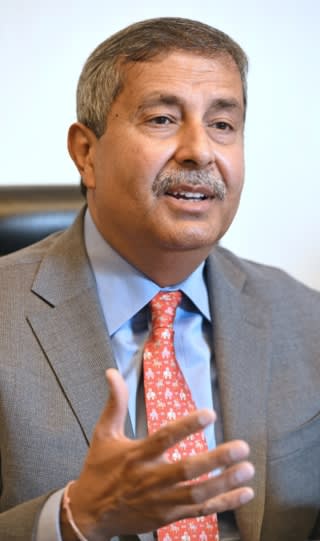 Memory is a crucial input for smartphones as well as data centers and other information technology infrastructure. China has launched a national effort to become self-sufficient in semiconductors.

The country serves as a vital market for Micron, Mehrotra said, noting that "we have very important large customers in all of our market segments, for our DRAM solutions as well as for our NAND solutions."

"We also have back-end assembly and test manufacturing capability in Xi'an," he added.

Samsung Electronics of South Korea holds a wide lead over rival memory chip suppliers in terms of market share. But Mehrotra emphasized Micron's technological strengths, noting that it is the only company aside from Samsung and compatriot SK Hynix to have both DRAM and NAND capabilities.

"I believe Micron has the best portfolio of technologies in the world, better than any other company," he said, mentioning cost-effective DRAM and NAND production, its own 3D XPoint memory and technologies still in the pipeline.

Mehrotra sounded bullish on the outlook for memory prices, arguing that the boom-bust cycles to which the market is notoriously prone will become shorter.

"I definitely do think that the demand drivers for DRAM as well as NAND are the best ever," he said. These include sources as diverse as data centers, mobile phones, personal computers, autos, smart homes and smart cities.

"All of these trends are big trends, and they are global trends and they are [long lasting] in nature," he said, adding that this combination creates a demand environment "very different from any time in the past."

Micron acquired what was then Elpida Memory in 2013 after the cash-strapped Japanese chipmaker filed for bankruptcy amid a plunge in DRAM prices. The deal gave the U.S. buyer a fabrication facility in Hiroshima into which it has poured billions of dollars since the takeover, according to Manish Bhatia, executive vice president of global operations.

"The Hiroshima site, combined with our design operations in Hashimoto [near Tokyo], are very, very important to Micron's product portfolio in DRAM," Bhatia told Nikkei.

The Hiroshima facility is a hub for advanced manufacturing as well as for low-power products, which are important components for smartphones, motherboards and "internet of things" devices, he said.

The company is considering investing billions of dollars more at the facility to "try and strengthen our technology competitiveness," he said.