Mengniu Dairy established a joint venture with Denmark's Arla Foods in 2005. The venture company produces high-end milk powder and sells its products under the brand name of Mengniuarla. On Sept. 21, Mengniu Dairy announced that it will sell the venture business to Yashili International, which now has about a 51% stake in the business. The price tag is roughly 1.05 billion yuan ($165 million). 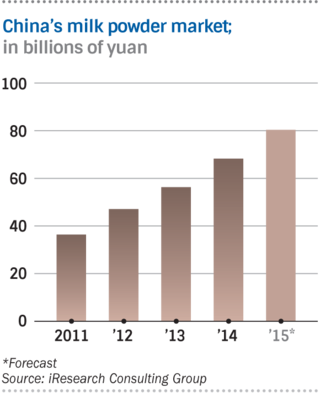 Back in July, Mengniu Dairy unveiled a plan to transfer milk powder operations under the Dumex brand, which was launched in cooperation with French food maker Danone, to Yashili International. The value of the deal has not been disclosed. Mengniu Dairy said that it intends to optimize the group's production network, cut production costs and reduce competition with its parent company.

In China, the milk powder market has been growing steadily, thanks to improved living standards. According to iResearch Consulting Group, it expanded 21% from a year earlier to 68.2 billion yuan in 2014. The Chinese market research body expects the market to achieve further growth from now.

Despite the upbeat outlook, Mengniu Dairy has faced sluggish sales of late due to growing competition from foreign competitors.

In 2008, melamine, which is harmful to human health, was found in Mengniu Dairy's milk powder products. Some babies died after drinking milk made with the powder. After the scandal broke, consumers became hesitant to buy products produced by Chinese companies and chose more expensive foreign products that were safer.

The company's milk powder business generated sales of about 1.8 billion yuan for the January-June half, down about 16.5% from a year earlier. Now Mengniu Dairy faces the challenge of improving its sales by taking measures such as developing new products.