TOKYO -- Mitsubishi Heavy Industries is pouring more money into its effort to develop a midrange commercial jet, President Shunichi Miyanaga told The Nikkei recently. The Japanese heavy equipment manufacturer's other potential investment targets, and many other aspects of its business, were discussed in a wide-ranging interview. 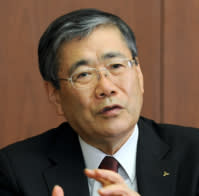 Q: In your three-year business plan starting this fiscal year, Mitsubishi Heavy is boosting investments and loans to 630 billion yen ($5.02 billion), up 15% from the preceding three-year term. What specific investment projects do you have?

A: First of all, we are bolstering our efforts to solidify a development and production framework for the Mitsubishi Regional Jet, a Japanese-made passenger jet. We have spent more than 200 billion yen so far, but in the next three years we will need R&D and capital investment totaling slightly below this amount. That's a lot of money, but we have no plans to procure funds in the market by taking subsidiary Mitsubishi Aircraft public. Mitsubishi Heavy will cover the cost.

Q: You attempted to acquire the energy business of French company Alstom in 2014, although that was not successful. Are you considering more large acquisitions?

A: The purchase could have cost roughly 700 billion yen, but we decided to pursue it. The advantage would have been that, if we acquired that business, it would have provided us with a service network in Southeast Asia. If we see an attractive deal, we will pursue it even if it is 500 billion yen or 600 billion yen.

The energy field, including fossil-fuel power systems, is shared by such major players as General Electric and Siemens. But the crude oil and gas fields still have room for realignment, so we are searching for an attractive deal.

A: These expenses include facility impairment and disposal losses, and they do not mean outright fund outflows. There are some businesses that we continued during Japan's postwar growth process but are finishing their roles. We plan to sell such operations as machinery and facilities systems businesses and set up new joint ventures to actively shuffle our business portfolio. Shuffling within 5% of sales (4.2 trillion yen forecast for this fiscal year) is being considered.

Q: Your expenses will increase with investments and structural reform. How about free cash flow, which you focus on?

A: We will be shouldering a burden of investment, but there is cash generated by existing operations, so we can generate 100 billion yen or more on average for the next three years. Free cash flow movements will dictate future profits. After this three-year period, which is packed with investment deals, we will have to raise the figure to above 200 billion yen a year, or otherwise our profit levels will not increase either.

Q: If your profit level increases, your shareholders' equity, which totaled 1.6 trillion yen at the end of March, will balloon too. Wouldn't it be too much in terms of capital efficiency?

A: In the long term, unless you generate more than 5 trillion yen in sales, you're not going to survive in the global market. Stable finances are necessary for accelerating investment in the MRJ and taking out big loans for acquisitions as well. We seek to have 2 trillion yen in shareholders' equity by March 2018. But we are not going to just boost capital. The midterm plan calls for lifting our return on equity from 6.5% last fiscal year to at least 10%. We will generate profits that are appropriate for the capital.

Q: Will you be able to meet this target?

A: In the defense and space business, where the government is the main customer, the operating margin does not change much from 6%. Considering this margin and shareholders' equity, we can see an ROE of 13%. By the time we are in the next midterm plan, when much of the MRJ investment will have been made, we must raise the ROE to this level or else we won't be able to win shareholders' understanding.