TOKYO -- Japanese automakers Mitsubishi Motors and Nissan Motor will standardize all of their electric vehicle technology, a move that will help Nissan roll out a competitive plug-in hybrid soon, Carlos Ghosn said Wednesday.

Ghosn, CEO of Nissan and its French partner Renault, on Wednesday added the chairmanship of Mitsubishi Motors to his growing list of titles following a shareholder vote.

Ghosn discussed Mitsubishi Motors' prospects for recovery from a fuel-economy scandal and the potential for greater cooperation with its partners in an interview with The Nikkei the same day.

Q: What are Mitsubishi Motors' strengths in terms of electric cars?

As you know, Nissan was the first company to announce in 2008 or 2009 that we were going to go mass market with electric cars. Mitsubishi followed, Tesla followed, General Motors followed. And now, everybody is following ... which is good. As an alliance we have more than a 50% market share [for] electric cars globally. So obviously we want to maintain this leadership.

Q: Will we see a plug-in hybrid from Nissan in the near future?

A: Yes. But obviously you take the technology, then ... the evolutions will be shared among the different companies. You know, [engineers] are very expensive. [Without sharing], you would have Mitsubishi engineering doing its own solution and Nissan engineering doing its own solution. And this is not in the best interest of the consumer. The best [thing for] the consumer is that companies pool their efforts.

This is the most efficient way, but this requires a lot of discipline inside the alliance. And that's what we want to do -- to allow the company to have lots of products and lots of technology, and [to] concentrate their efforts on selling and developing their business.

Look at the volume of Mitsubishi. Saleswise, it's very stable while the global car market is not. There is something to be done here. Nissan, I remember, in 1999, sold 2.4 million cars. This year, the forecast is 5.6, 5.7 million. That means the top management of the company had put [together] a plan for growth. I'm expecting Mitsubishi to do the same -- not only to be profitable, but to grow the company with new technology, new products, in new markets, with good collaboration. At the end of the day, that's what the shareholders want. We are here to create value --  to add value through growth ... profits and benefits for society.

Q: Mitsubishi Motors shareholders are being asked to approve a significant increase in pay for directors. What is the intent of that proposal?

A: Compensation is one part of the transformation [of the company]. Mitsubishi's top management is compensated [according to] a fixed amount, no matter whether the company is doing well or not doing well -- expanding, shrinking, [whether or not it] has a long-term vision. It's a fixed amount. This is totally against every single management principle.

So the first thing is compensation must be valuable, with very specific objectives. Second, [objectives] should be long-term, where people not only care about one-year results but [also] the long-term [health] of the corporation. There must be a plan, milestones in the plan, and the compensation should be aligned with the performance of the company in the short term and the preparation of the company to compete in the long term. The basic amount [of compensation] is mainly due to market considerations. When I say market, it's a mix of the Japanese market and global markets. Variable compensation is strictly linked to the budget -- the sheer profit and market share.

And long-term compensation is based on achievement of a longer-term plan. And obviously, when we ask shareholders for authorization, it doesn't mean if we pay everything the company is doing great. It means all the objectives in the budget are met and all the milestones for the long-term plan are met. So it's a kind of maximum authorization. Usually you never use it because, unfortunately, a company almost never delivers on everything. So it is a complete change of mindset, a complete change of management style for compensation.

Q: So this change applies not only to directors but also to other executives and employees as well?

Q: Mitsubishi Motors is still dealing with the fuel-economy data scandal. What caused it?

A: Frankly, I think probably [President] Masuko-san and the team at Mitsubishi know better than me. I don't have any particular personal experience [with the matter]. I am more focused on the future, not so much on the past. And here, obviously, as the future chairman of the board of this company, my responsibility will be to make sure that the governance of Mitsubishi is very rigorous and that things like that will not happen in the future. 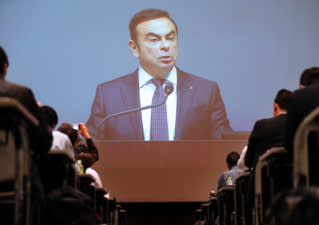 We need to make sure that all the processes, controls -- [our] mindset are put in place in order to eliminate any risk of something like this happening in the future.

Q: When you arrived at Nissan from Renault, you revived the company. How will use this experience in your new role?

A: You know, the situation of Nissan in the 1990s was different from the situation at Mitsubishi in 2016, so I don't think you're going to see anything similar. There are some principles. For example, compensation: it should be competitive. It should be variable. It should be aligned with shareholder interests.

But in terms of priorities and problems to be solved -- opportunities for the future, I think Mitsubishi is a completely different case than Nissan was in '99. In '99 I was driving the change, now I'm supporting the change. The drive is being made by Masuko-san. He is in charge of the company, and he will have to drive the company through this period -- with the total support of Nissan. I think [Mitsubishi Motors] has the potential to make a V-shaped recovery. Mitsubishi should grow and we [should] grow.

Q: What are the key points in Mitsubishi Motors' next midterm plan?

So part of it is common and part of it is very specific. Each company has its own strategy, its own market, its own perspective, its own brand, its own strength. So it's too early to talk about it. And obviously this is going to be the responsibility of the management -- Masuko-san, Trevor Mann and the others -- to elaborate the plan, validated by the board, and then we'll announce it. Obviously it will happen in 2017, when they will be ready. But part of this plan depends on the alliance. Now that everyone is using the same platforms, structures, purchasing.

Q: How will the election of Donald Trump as U.S. president affect the Nissan Renault group?

A:  Our responsibility is to make our companies resilient, but resilience has a lot of components. Anticipating risk is very important. Trying to mitigate volatility is very important. For example, [in] foreign exchange. There is nothing we can do -- [about the rate of] the yen to the dollar. We can do nothing, but we can reduce the dependence [of the company on the rates]. For example, we at Nissan have been localizing production in North America, mainly to reduce the impact of the dollar on the yen. Localization makes a company more resilient. Opening up diversity makes the company more resilient.

In the case of an alliance, it is not the scale of a company but the scale of the group. For example, when we buy together, what we are doing is -- in the case of Mitsubishi, this is a 1 million car company. Buying through a purchasing organization which represents 10 million cars, you can see the advantage.

When we develop an engine, if the engine is only used by a million cars, the engine cannot be as competitive as if it was shared by 10 million. Scale used smartly and with discipline is resilience. At the end of the day, what the public is expecting is resilience.

The revival of Nissan, after 10 years of unprofitability ... from 1999 until now -- for 17 years the company has been in good shape. That is what is expected. It is long-term resilience, long-term growth, long-term problem-solving, long-term visibility.