TOKYO -- Mitsubishi Motors will aim for 50% increase in sales in the ASEAN market over the next three years, as the Japanese automaker seeks to bounce back after a downturn brought on by a fuel economy scandal last year.

The plan was announced Wednesday as part of Mitsubishi's new midterm business strategy. The company said it will earmark 600 billion yen ($5.33 billion) over three years for capital spending, and research and development, to meet rapidly changing business conditions.

"The car industry is facing immense changes brought about by new rivals like Tesla and Uber," Osamu Masuko, CEO of Mitsubishi Motors, told reporters at a news conference in Tokyo the same day. "Our new three-year plan is laying the foundations for sustainable growth, as well as retaining our competitiveness." 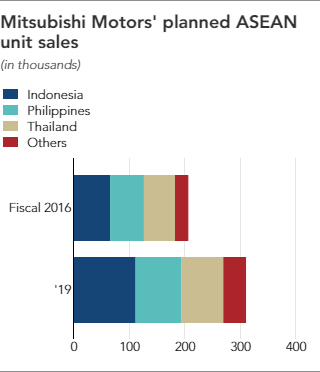 In April, Mitsubishi opened a new plant in Indonesia that can turn out 160,000 cars a year. The automaker said demand is brisk for its new-model multipurpose vehicle, which it plans to export to other Southeast Asian countries, including Thailand and the Philippines.

Mitsubishi will use part of the 600 billion yen budget to push for more growth in the region, which it calls a "bedrock," as well as to develop electric cars.

For the Chinese market, Mitsubishi is aiming for a 150% increase in unit sales to 220,000 cars in fiscal 2019, up from 88,000 in fiscal 2016. Masuko said the company was considering local production of its new SUV, as well as rolling out electric vehicles specifically for the Chinese market to meet Beijing's tough regulations on so-called new-energy vehicles. The automaker will also double the number of dealers in the country to 400 over the next three years.

The latest midterm plan is aimed at steering Mitsubishi back toward investing for growth following a scandal in which the carmaker last year admitted inflating fuel-economy data on its cars. That lapse forced the automaker to focus on internal reforms.

The falsification of fuel-economy data on all 20 models sold since 2006 first came to light in April last year. That put a serious dent in Mitsubishi's earnings, as it shelled out compensation to customers, dealers and parts makers. In fiscal 2016, the company booked a net loss of 198.5 billion yen.

"We have caused many people trouble" as a result of the scandal, Masuko said. "We do not think that we have fully regained [customers'] trust, and will continue to try to do so. That is the first priority of this midterm plan."

Masuko acknowledged that the company uses components made by Kobe Steel, which has come under fire for doctoring inspection data on a wide range of products, including aluminum and copper materials. He said that for parts that Mitsubishi has purchased from Kobe Steel itself, Mitsubishi has been told there are no safety concerns.

"We haven't decided whether we will ask for compensation," Masuko said. "We will decide after we conclude our investigation."