Mitsubishi Motors to install EV chargers at all dealerships

TOKYO -- Mitsubishi Motors will set up quick charge stations for electric vehicles and plug-in hybrids at all of its 700 dealerships nationwide by March 2016. The Japanese automaker wants to promote green vehicles which are selling slowly and whose future is overshadowed by lower crude oil prices.

The quick chargers, which will be mostly available 24 hours a day, can recharge about 80% of a car battery in half an hour. Users will have to pay only 1,000 yen ($8.27) a month if they have industry-wide membership cards. 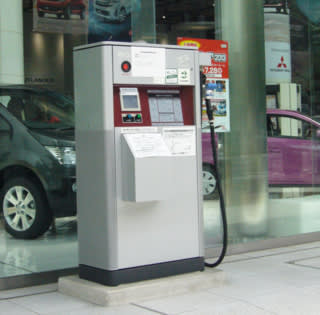 A quick charger at a Mitsubishi Motors dealership

Mitsubishi, which has introduced the i-MiEV and the Outlander PHEV, is also considering a new pricing system.

Rival Japanese company Nissan Motor was faster to set up its quick chargers. Its 2,100 dealerships across Japan all have standard chargers, which are slower, and 1,600 have quick chargers. The chargers are mostly only available during business hours.

In October, Nissan launched a campaign to lease Leaf electric vehicles to condo residents for two months free of charge. The campaign, which lends one Leaf car to each condo, targets 10 condos and 2,000 households in the Tokyo metropolitan area. The campaign is an extension of a previous one where participants could only drive the Leaf for 30 days.

A 2012 survey by Tokyo-based Next Generation Vehicle Promotion Center shows 93% of respondents cited high prices as one of the main reasons for not buying an EV, followed by 86% who said running out of battery on the road is worry and 79% who said the limited number of chargers is a concern.

However, EV prices have been falling lately. For example, when it was first introduced, Nissan's Leaf electric vehicles were 2.98 million yen including subsidies -- at their lowest. Now they cost 2.26 million yen.

Also, Toyota Motor, Nissan, Honda Motor and Mitsubishi have established a joint venture to expand the number of EV charging stations throughout Japan.

Japanese retail giant Aeon has 250 chargers at its 100 shopping malls and other stores as of November. Daikyo, which develops and sells the Lions Mansion condominiums, is also setting up chargers at its new condos. As of July, 157 condos provided chargers.