Industrial group plots comeback after falling behind on digital wave The ceremony at a Kobe shipyard was attended by Mitsubishi Heavy President Seiji Izumisawa as well as Defense Minister Nobuo Kishi -- a scene that evoked the group's longtime philosophy that "Mitsubishi is for the country."

The Mitsubishi group has long been one of Japan's industrial powerhouses, playing a key role in the nation's rapid economic rise following World War II. But with its 150th anniversary coming up, it faces a major test on whether it can grow and stay relevant in an increasingly digital-driven business environment.

Mitsubishi's history is closely tied to the sea. The group was originally founded by Yataro Iwasaki as a maritime shipping company in 1870. It was a latecomer compared with other big Japanese prewar conglomerates, like Sumitomo and Mitsui. But just six years later, it had grown into a diverse business where more than 20% of its 1,739 employees were international.

Mitsubishi's second, third and fourth leaders all had experience studying abroad. The group was also a pioneer in adopting cutting-edge foreign technologies and embracing Japan's modernization, thanks in part to its roots in heavy industry.

Like the rest of Japan's so-called zaibatsu conglomerates, Mitsubishi was dissolved following World War II. It reformed as a keiretsu group of companies, expanding beyond chemicals, heavy industry and automobiles to a range of industries from finance to trading. Today's Mitsubishi group encompasses more than 4,000 companies.

But the group has lost momentum in recent years.

Mitsubishi's top 21 publicly traded units have a combined market capitalization of about 25 trillion yen ($237 billion). This is roughly a quarter of Google parent Alphabet and comes in below the market cap of Samsung Electronics, the flagship of South Korea's largest conglomerate.

Google, which has succeeded in building a global digital empire, quickly overtook the Mitsubishi group after going public in 2004. Samsung has also increased its market cap roughly sixfold since the end of that year, thanks to its success in smartphones and smartphone parts. But the Mitsubishi group's valuation has remained roughly flat.

Intangible assets like data, software and algorithms are critical to a company's success in the digital-driven world of today. Google, as well as such other U.S. tech giants as Amazon.com, Facebook and Apple, have bolstered their value through these types of assets.

A long history working with the government on defense and infrastructure ultimately held Mitsubishi back. "It was unable to start thinking beyond hardware," said Hitoshi Kaise, a Tokyo partner in German consultancy Roland Berger. 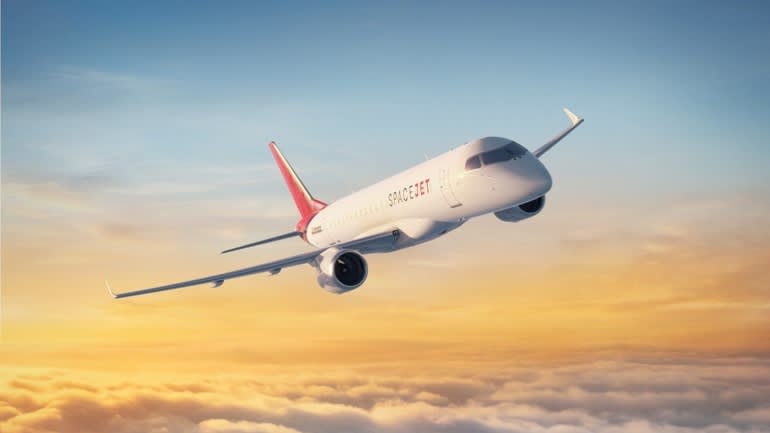 The Mitsubishi SpaceJet, originally called the Mitsubishi Regional Jet, has yet to be delivered to a single client over 10 years into development.

Mitsubishi's passenger jet project symbolizes its struggles adapting to new business areas. Mitsubishi Heavy began work on the plane in 2008 to establish a new manufacturing industry in Japan that could rival automobiles. But delays and design changes have plagued the project, and not a single aircraft has been delivered yet.

"Mitsubishi's inward-looking governance, like appointing external directors from other group companies, is to blame" for the group falling behind, said Akira Inoue, a partner at Baker McKenzie's Tokyo office. Regaining the open, diverse culture that defined Mitsubishi's earliest years could be the key to the group's further growth.

Trading house Mitsubishi Corp. is blazing the trail. In February 2019, it took part in a $1 billion funding round for Indonesian ride-hailing app Gojek. In cooperation with Nippon Telegraph & Telephone, the company also entered into a capital partnership with Dutch company Here Technologies, one of the world's leading providers of digital maps. It aims to develop a new mobility service using data and know-how from Gojek and Here.

The vast resources held by the group's 4,000-plus members could be a boon for future opportunities as well. One of Mitsubishi's strengths is the ability to develop new products and services based on consumer trends by relying solely on resources within the group.

"The next few years will be a test of whether we can combine the expertise from different group members to create a new business," Mitsubishi Corp. President and CEO Takehiko Kakiuchi has said.

From power to steel to automobiles, many of the industries that drove Japan's postwar growth now face heavy headwinds. A comeback by Mitsubishi, which was at the center of the rapid growth, could help revitalize Japanese industry as a whole.