TOKYO -- Mitsubishi Corp. will sell its only stake in an overseas nickel project and shift its resource business toward copper, coal and natural gas.

The Japanese trading giant is expected to unload its 30% or so interest in the Weda Bay nickel mine under development in Indonesia for about 10 billion yen ($89.8 million) to French partner Eramet.

Mitsubishi invested around 13.5 billion yen in the project, establishing a joint venture with Eramet in 2009 to develop the mine -- located on the island of Halmahera. 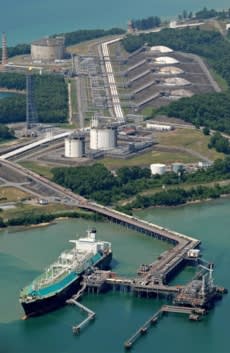 A Mitsubishi liquefaction facility in Malaysia.

But with nickel prices having plunged to about $9,000 per ton from some $30,000 in 2011, Mitsubishi determined that the project would not turn a large enough profit.

With related impairment losses already booked, there will be no fallout on Mitsubishi's fiscal 2015 results. The company is expected to report a 150 billion yen net loss. Mitsubishi had to write down 430 billion yen last fiscal year on resource projects, including a Chilean copper business.

Even after such losses, the company will retain assets in the three core areas of copper, coal and liquefied natural gas, with further write-downs possible. It may acquire new stakes in promising projects if resource majors opt to unload theirs. "We will not increase the total value of assets but change the makeup," President and CEO Takehiko Kakiuchi has said.

Peers are also working to realign their resource businesses. Itochu sold its 25% stake in a U.S. oil and gas developer last year for $1 in a retreat from shale gas operations. It paid 78 billion yen in 2011 to acquire shares in the company.

With many observers expecting prices of oil and other resources to stay at current levels for a few years, trading companies face the challenge of deciding what assets to unload, retain and acquire.