TOKYO -- The operator of the Muji retail chain expects to earn a record net profit for a fourth consecutive year in fiscal 2018, as China's middle class turns away from lavish products and embraces the brand's minimalist-style, natural-ingredient offerings.

Ryohin Keikaku's net profit will likely rise 11% on the year to 33.3 billion yen ($312 million) for the year through February 2019, the Japanese company said Wednesday. Operating profit is forecast to grow 10% to 50 billion yen, with 29.4 billion yen likely coming from the Japanese operations, which are seen improving 3%. The overseas operations are expected to contribute 20.4 billion yen for a 27% jump.

East Asia probably will drive the gain, boosting the region's operating profit to 20.6 billion yen -- a surge of 22%, or 3.7 billion yen. That figure alone would be responsible for 80% of the projected 10% gain in group operating profit.

"China recorded double-digit growth in same-store sales for March," President Satoru Matsuzaki proudly told a news conference Wednesday. Particularly hot items in that market are skin toners with natural ingredients, which are popular with younger customers, he said. Beauty products account for roughly a quarter of all sales in China, compared with about 16% in Japan.

Chinese consumers are increasingly paying attention to where products are made and what they are made of, particularly for skincare items. The growing middle class is choosing to buy quality goods, even if they have to spend a little more. Muji's principle is to "offer products with good quality in absolute value," in the words of Matsuzaki, and this perfectly aligns with what consumers want nowadays. 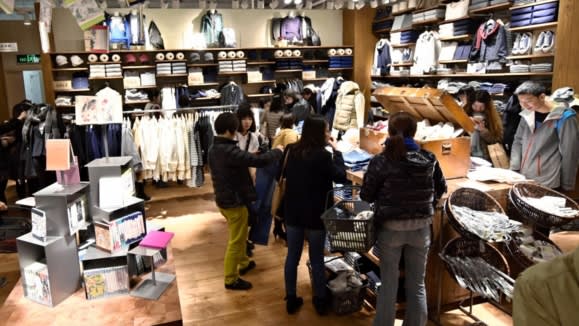 Ryohin Keikaku is opening more of its Muji stores in China and other Asian markets, but raising margins there is an issue. (Photo courtesy of Ryohin Keikaku)

Ryohin Keikaku plans to open 35 stores in China this fiscal year, up from the 29 new locations launched there in fiscal 2017. Offering apparel, household goods and food under its famous philosophy of simplicity, Muji sees same-store sales climbing 4.5% in in East Asia -- China, Hong Kong, Taiwan and South Korea.

But improving margins presents a new challenge. Although East Asia's operating margin has suffered declines since hitting 20.8% in fiscal 2015, it is finally expected to gain 0.6 percentage point to 16% this fiscal year as rising costs will be curbed with the use of foreign exchange futures. The figure for Japan will likely come in at 11.7%, but that number has been on a gradual uptrend from three years earlier. The company will need to work on raising the margin while striking a balance with sales growth in China as well through its pricing strategy .

Ryohin Keikaku's stock slid 2% to 34,500 yen a share Wednesday. Since Japan is unlikely to see a strong recovery in consumption, expanding sales abroad will be crucial for Japanese retailers, said an analyst at a domestic brokerage. Investors will closely watch if and how the company behind the Muji brand -- which opened its first namesake hotel in China this January -- will retain its cult following through business diversification.