The 79-room Muji Hotel Ginza will serve as a test lab for developing new products and help the brand expand beyond the consumer goods for which it is globally known, according to Satoru Matsuzaki, president of Muji owner Ryohin Keikaku.

Located in Ginza, the hotel also includes a flagship Muji store, a restaurant and a bar. Rooms are priced from 14,900 yen ($133) per night to fill an unmet need for affordable hotels.

"Travel is an extension of everyday life," Matsuzaki said, adding that Muji is aiming for the midrange because most hotels tend to be either expensive five-star accommodations or budget hotels.

Ginza is a popular destination for tourists, and the hotel targets both domestic and foreign travelers. It is the third Muji Hotel globally, following launches in the Chinese cities of Shenzhen and Beijing last year. The new hotel is operated by Japan's UDS, which pays Ryohin Keikaku licensing fees to use the Muji brand, and buys hotel amenities and related items from Ryohin Keikaku. UDS is a subsidiary of the transportation company Odakyu Electric Railway and operates hotels across Japan and China.

The hotel business is likely to account for just a fragment of Muji's revenue, but that is not the point, according to Matsuzaki. In addition to providing a place for customers to try out new Muji products, the hotel will also help develop new businesses, he said, adding it will contribute to "our product development and expand our business capabilities."

Matsuzaki is particularly interested in beefing up Muji's corporate-oriented business. Since the quality standards for business and consumer products are different, Muji must tailor its consumer goods for use in its hotels. The ability to do so will "widen the commercial capabilities for Muji," he said. 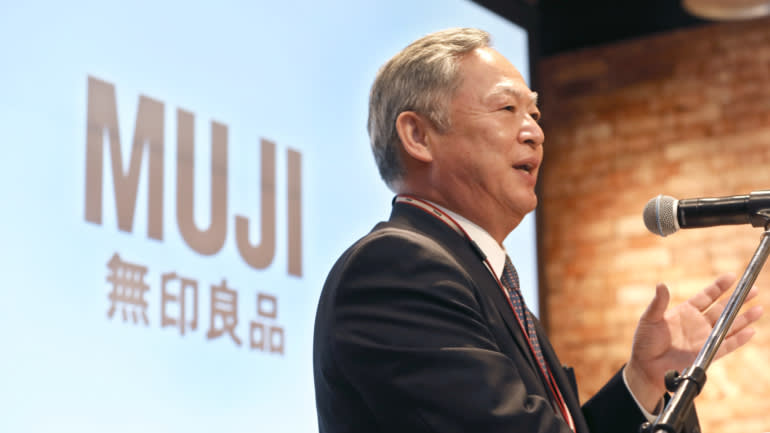 Though still small, the company's corporate business "is set to expand," he added.

The flagship retail space situated on the lower floors of the hotel is also intended to serve as a hub for developing new services, such as selling vegetables produced by local farmers. "We want to take ideas [from the Ginza store], such as purchasing directly from producers, to the rest of the world," Matsuzaki said.

The use of paper bags instead of plastic ones is another initiative at the new store that the company plans to implement globally.

The new hotel also has an art gallery with a lounge and a bar that serves drinks until 2 a.m.

Matsuzaki said it will "take time" before the company opens any new hotels, saying it is important to find investment partners who understand the Muji values.

Muji chose China and Japan, its two key markets, as the locations for its first hotels. The Japan location was supposed to open first, but the projects in China proceeded faster, Matsuzaki said. The Chinese hotels have been popular so far, with a roughly 95% occupancy rate for the Beijing location.

And while there have been offers from companies wanting to open Muji Hotels in the West, he said, "Japan and [the rest of] Asia are the big markets considering their populations."