"In Myanmar, food factories are located in so many places lacking in internationally acceptable hygiene standards," Chairman Win Aung said in an exclusive interview. His industrial park will supply plants with water and a sewage system, among other amenities.

Dagon intends for the 200-hectare campus to attract 80 companies, with 70% to 80% of them owned wholly or partly by foreign capital, according to CEO Thurane Aung, the chairman's son. Detailed blueprints and the costs have yet to be finalized, but investment should range between $100 million and $150 million for the site in East Dagon, a township in northeast Yangon.

The park will be near a new dry port -- an inland cargo terminal linking a seaport with road and rail transport. The port construction could be completed this year, allowing raw materials from the central Myanmar farmlands to be sent by rail to the industrial park. Win Aung, chairman of Dagon International, sees the food processing park as part of a larger expansion into agribusiness.

The conglomerate aims to provide the kind of high-quality infrastructure found at the Thilawa Special Economic Zone, the industrial park jointly developed by Myanmar and Japan. "We have two very good water resources" near the site, Thurane Aung said, noting the spot was chosen because water can be furnished at a low price. The response from potential clients has been "quite positive," Thurane Aung told Nikkei, saying the market welcomes an industrial park focused on food processing. Plans are under review by the Myanmar Investment Commission. Dagon is looking to start recruiting clients by the end of the year, with plants beginning operations as soon as 2019.

Dagon's jump into food processing represents part of an overall campaign in the food and agribusiness arena. The company opened a modern fruit and vegetable wholesale market in January near Yangon International Airport, featuring produce from across the nation. The public-private project, joined by the Yangon City Development Committee, drew about 25 billion kyat ($18.5 million) in funding.

The market attracts 700 producers every morning. The operator, Myanmar Agro Exchange, intends to list on the Yangon stock market in the near future. It also plans to open assembly markets across the country, including in the Thai border town of Myawaddy in Kayin state, and the Chinese border town of Muse in Shan state, to deliver agro-products like a "spider web," Thurane Aung said. "We will slowly educate the farmers to have better packing so that the logistics become more efficient," he said, noting that there are many post-harvest damages to products. 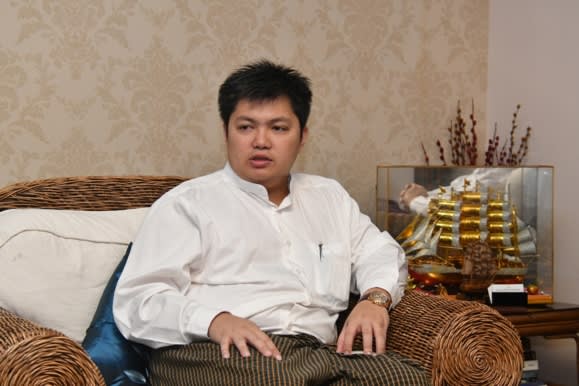 Thurane Aung, CEO of Dagon International, said the site for the industrial park was chosen based on its ample water resources.

"Our country always claims to be an agricultural country, but we didn't have a fruit and vegetable wholesale market fitting proper international standards," Win Aung said. "We are not just simply aiming at a wholesale market. With that, we can expand to downstream and upstream industries to be explored."

After its founding in 1990, Dagon International grew into one of Myanmar's blue-chip conglomerates, operating in the trading, construction and real estate sectors. The Myanmar Centre for Responsible Business ranked the company seventh in its corporate transparency report this year. The company in 2004 opened the Dagon Centre, a modern shopping center in Yangon.

Dagon's real estate and construction segment, which accounts for more than 70% of sales, will remain a core operation. But the group wants to diversify its major revenue sources.

"We are looking forward [to involvement] in infrastructure development as well," Win Aung said, such as gas-power generation.

Agribusiness and food production will be Dagon's third-largest business. The group aims to expand its agribusiness operations by occupying "the heart of the value chain," Win Aung said. Dagon launched a plantation business in 1999 that produces palm oil, natural rubber and mango.

Myanmar's development of the agricultural sector carries both economic and political importance. About 70% of the population lives in rural areas, and 26% of gross domestic product comes from agriculture, according to World Bank estimates for 2017 and 2018. The government launched an Agriculture Development Strategy this month that seeks to enhance productivity in that field.