TOKYO -- Japanese electronics makers are keen to team up with governments around the world to develop artificial intelligence technologies. The amount of data available for analysis appears to be the key to creating highly reliable services.

At a U.S.-Mexico border checkpoint in Otay Mesa, California, a group of Mexican immigrants recently waited at a gate to go back to their home country. As one woman passed in front of a camera, a warning message suddenly popped up. The Mexican housemaid was immediately arrested by the U.S. Border Patrol for being an undocumented worker. 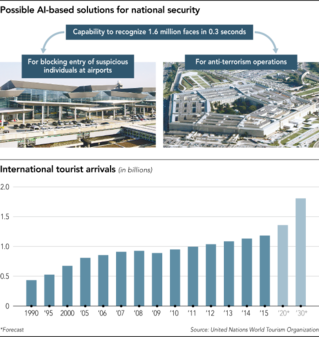 The U.S. Department of Homeland Security, the watchdog for terrorism and illicit drug trading, introduced an AI-based security system at the border crossing in February. The system, developed by Japan's NEC, can match photos of people's faces taken when they entered the U.S. with images recorded at the exit checkpoint.

A test run by a U.S. government research institution showed the system was able to pick out a person from a group of 1.6 million faces in just 0.3 seconds. NEC President Takashi Niino claims the system's speed and precision are better than those of any other similar system.

What has made it possible is a huge stockpile of images of human facial features in the system -- different types of eyes, noses and mouths, and other features such as shading. Through this data, the system learns to recognize differences between individual faces using an AI method called deep learning.

NEC is eager to introduce the technology to U.S. government officials. In May, it opened a branch office near the White House in Washington. Benji Hutchinson, senior director in charge of marketing, says Homeland Security is an important client, and he recently visited the headquarters of the Defense Department. Initially, the company received orders mainly from local governments, such as state police agencies that wished to use the system to identify people. But it has begun to receive inquiries from the federal government, which appreciates the system's quick, precise recognition capabilities.

The technology also contributed to safe operations at this year's Rio Olympic and Paralympic Games, the first to be held in South America. The Brazilian government introduced NEC's system to international airports in Rio de Janeiro and Sao Paulo earlier this year to block suspicious individuals from entering the country. The system performs real-time matching of people who are about to enter the country with individuals on an alert list.

Amid growing threats from the Islamic State and other terrorist groups, quick detection of suspicious individuals at borders is becoming essential for many governments. Leveraging its expertise, NEC aims to develop technology capable of completing a course of check-in and security checks all at once. During a test run of the system, the error ratio of identification was 3% for 160 thousand faces, but the company aims to achieve zero errors. It also plans to improve accuracy by making the system able to compensate for varying facial expressions and changes in facial features caused by aging.

Niino says the company hopes to help create an environment where people can move around the world quickly and safely.

Meanwhile, on the other side of the globe, an AI experiment is taking place to reduce traffic jams by analyzing individual characteristics. In Singapore, Japan's Fujitsu has teamed up with the government to conduct a two-year test, running through next year, involving tens of thousands of locals.

For a country with about 5.5 million people living in a small area, traffic jams can be a serious problem. The government has taken various measures, including the introduction of a vehicle quota system, to control the number of cars on the road. Another measure involved offering free rides on early morning trains.

The government is now preparing to control traffic by leveraging big data on individual behavior. For example, during a large event at a stadium with a capacity of 30,000 people, a message was sent to smartphones of some participants as the event came to an end, telling them they could spend an hour or so at a nearby shopping center to avoid traffic jams on the way home. The message came with a discount coupon for restaurants.

Based on data about the individuals, such as the location of their smartphones and coupon usage, the system divided participants into two groups -- one for those who were thought to dislike being caught in traffic jams, and another for those who preferred to go home as early as possible. Without sending the coupon to the latter group, the system indirectly encouraged them to get on buses earlier than the other group. The development team expects to reduce congestion in the country by 30%.

However, this type of AI-based measure may only work if government support is available.

Lim Chuan Poh, the chairman of Singapore's Agency for Science, Technology and Research, said the government is prepared to provide data on individuals for the program if necessary. This is unlikely to happen in Japan, where privacy concerns pose a number of hurdles regarding information disclosure.

Taizo Anan, the innovation director at Fujitsu Laboratories in Kanagawa Prefecture, is in charge of promoting the test in Singapore. "We could obtain various personal data in Singapore, including entry and exit at train gates," Anan said. "But this data would not be available in Japan."