"We want to turn the city into a modern and eco-friendly metropolis," Le Hoang Chau, chairman of HoREA told the audience, as he called for foreign investment to support the more than $21 billion project to upgrade Vietnam's commercial hub. The city is suffering from traffic congestion and environmental issues related to its population of around 10 million.

One of the biggest projects is the "New Urban Area," which was officially started in 2011 but on which progress has been slow. The new district is located at Thu Thiem, a land area of 657 hectares on the east bank of the Saigon River opposite to central Ho Chi Minh on the river's west bank, which will be the new administrative district of the city.

Elsewhere, the city is pitching for renovation projects to replace half of the 474 old apartment buildings located in districts that were mostly constructed before 1975, the year the Vietnam War ended. Investors are also being sought to renovate and develop canals, lakes and rivers in seven districts. The projects involve the relocation of more than 20,000 households and are slated to be completed in 2020. 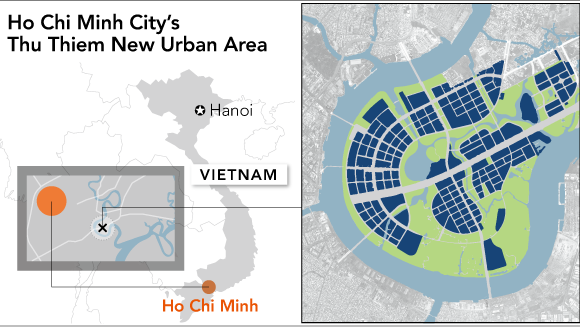 Ho Chi Minh City dates back more than 300 years and is now home to 10 million people, but has developed without a sustainable plan, according to Le Hoang Chau.

"The absence of a decent plan has had a crucial impact on the city's development, especially during the last decade," he told the Nikkei Asian Review in an interview on March 23. "It has created a messy situation, including traffic congestion, population pressure, environmental pollution and floods." He said that with the New Urban Area planned in Thu Thiem, along with the upgraded districts, Ho Chi Minh City is expected to house some 15 million people by 2030.

The plan to build the New Urban Area in Thu Thiem was originally approved in 1996. But it took a decade for the city to start relocating residents to make way for basic infrastructure development. The city's population saw average annual growth of 3.9% since 2000, driven by economic growth.

Individual projects within the New Urban Area have gradually been licensed since 2011, while the overall plan has been subject to many adjustments over the past decade.

Voices from the local business community calling for a major upgrade of the city were largely ignored by the central government until January this year, when Hanoi granted a certain degree of autonomy to the city, which has risen as the engine of the fastest growing economy in Southeast Asia.

Hanoi's move was part of reforms by the central government and communist party. Ho Chi Minh City is now able to decide on certain important matters, including the management of its land, investments and state budget, as well as raise income for public servants and cadres without needing central government approval.

The latest plan on the New Urban Area was finally adjusted and approved in February 2017. More projects will be publicly auctioned this year, after clearance works have been carried out.

Earlier this year another project covering three districts in the eastern part of the city was pitched to form an "innovative area" housing high-tech companies as well as universities. HoREA has also suggested the city pitches a project to develop a new area of 9,000 hectares to the northwest of the city, some 40km from the center. Most of the land is currently used for agricultural purposes, and could be developed as a modern rural area, focusing on high-tech agriculture production and services. This could also provide a way to distribute some of the population from high density areas.

Financing the projects will be one of the biggest challenges, requiring some 500 trillion dong ($21.9 billion) if they are to complete by 2020, according to Le Hoang Chau. Given the city's increased autonomy, it must find sources of financial support on its own. About a third of the investment is set to come out of the city's budget. For the remaining $14.6 billion, it will have to tap other sources, in particular using a public private partnership model involving local and foreign investors.

Potential foreign investors could be those who already have a strong presence and investment background in the city, such as those from Singapore, Malaysia, Hongkong, South Korea and Japan. "Cooperation between the Japanese and Vietnamese developers will be our first priority," Le Hoang Chau stressed in the interview.

Access to capital will be a big challenge for Vietnam's real estate sector in 2018, as the State Bank of Vietnam continues to limit credit sources to the sector. That is forcing local developers and authorities to seek more funds overseas, according to Savills Vietnam Investment Director Su Ngoc Khuong.