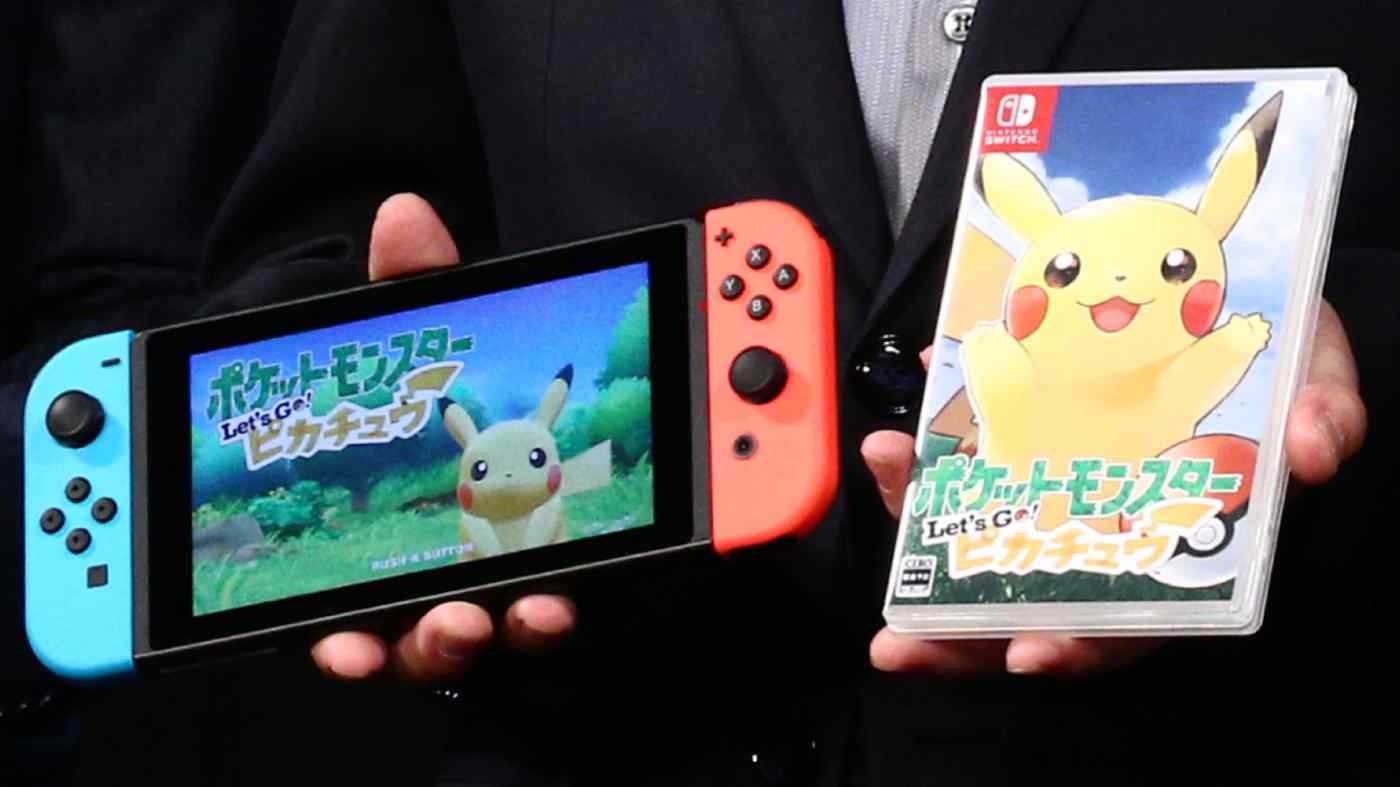 OSAKA -- Nintendo has revealed a suite of new Pokemon games for the popular Switch device, taking a step to decrease the company's exposure to hit-or-miss hardware sales by expanding the reach of popular content.

The role-playing game "Pokemon Quest" debuted on Wednesday, free to download on the Switch while a version for smartphones arrives at the end of June. It will generate revenue largely through in-game item purchases.

The biggest attraction of the "Let's Go" series is its ability to connect with "Pokemon Go," the hit mobile game that garnered 800 million downloads worldwide and created a phenomenon of players hunting for virtual monsters in the real world -- even raising national security concerns in China.

The new series marks the first time that Kyoto-based Nintendo has incorporated elements of a smartphone game into one of its own devices.

Nintendo owns over 30% of Tokyo-based Pokemon Co., the distributor of the three games.

The developer's president, Tsunekazu Ishihara, told reporters on Wednesday that he hoped the new titles become "the games that people who first came in contact with Pokemon through 'Pokemon Go' play next." More Pokemon titles are set to hit the market next year as well.

This emphasis on a winning franchise represents Nintendo's first step toward getting off the earnings roller coaster driven by volatile device sales.

Nintendo is notoriously protective of its software, and its gallery of famous characters has seldom appeared on other company's devices. The company finally came around to unleashing Pokemon and Mario characters for smartphones and other mobile devices, looking to reach new fans whom it could convert to consumers of its own gaming machines and software.

This strategy has extended beyond screens. Nintendo is taking part in a 60-billion-yen ($550 million) project to create a theme park inside Universal Studios Japan in Osaka that features Mario and other well-known characters. Doors are scheduled to open in summer 2020, possibly with perks for visitors who bring the Switch with them.

Nintendo is also licensing its characters to appear on more clothing and food. Kellogg released a Super Mario cereal in the U.S. last year with a microchip embedded in the box that, when read by the Switch, allowed consumers to access in-game items for "Super Mario Odyssey."

Iwata oversaw roaring demand for the Wii console that lifted group operating profit above 500 billion yen for the year ended in March 2009. But the successor Wii U device flopped, and Nintendo posted operating losses for three straight years starting in fiscal 2011. The company cut roughly 10% of its European jobs in summer 2014, marking its first major round of layoffs.

Shuntaro Furukawa, who takes over as president from Kimishima in June, has said he will continue the diversification strategy. He has a goal of making smartphone games into a business worth 100 billion yen in sales for Nintendo, and to increase revenue from movies and other sources as well.

"We need to work hard to develop businesses beyond the Switch," Furukawa said.

Yet it is the competitiveness of the Switch that enables this strategy. Nintendo has sold 17.79 million of the devices through March, but demand has softened recently. Pokemon games could give the Switch a shot in the arm. While it lasts, Nintendo's new chief will need to show progress on smoothing out the bumps in earnings.