NEW YORK -- The sign taped to the door said: "Our lunch waitlist is closed." But the bad news did not deter the crowd of would-be diners clustered around Tim Ho Wan restaurant, hoping to score a table.

"I don't know what that means," one man said, glancing at the sign. "Let's just go eat somewhere else?" his female companion suggested doubtfully. Jonathan Pan came out disappointed after trying unsuccessfully to convince the host to let him dine. He had hoped to eat with two friends who are mad for dim sum, a traditional Cantonese brunch comprising a spread of small dishes. But at 12:30 p.m. they had shown up two hours too late.

Since being named the world's cheapest Michelin-starred restaurant in 2010, Tim Ho Wan has capitalized on that distinction to create a global brand. (In 2016 a Singapore hawker stall, confusingly named Hong Kong Soya Sauce Chicken Rice, took the cheapest Michelin mantle.) 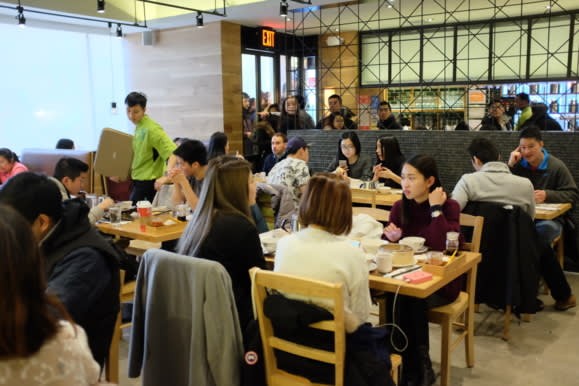 Tim Ho Wan is a Hong Kong-based chain whose branches in Southeast Asia attracted considerable attention. Its first U.S. restaurant in New York City's trendy East Village was no different. When the restaurant opened on Dec. 16, and for several days after, customers waited as long as four hours to put their names on the waitlist, after which they would receive a text to let them know when their table would be ready. By 9 a.m. on Christmas Day -- an hour before the restaurant opened -- a long line snaked around the block.

The restaurant is in soft-opening mode until its proper launch on Jan. 18, from when it will operate from 10 a.m. to 10 p.m. (11 p.m. on weekends). There will be no breaks between lunch and dinner, in line with dim sum eateries such as Golden Unicorn and Jing Fong, in Chinatown, and New York's other major Chinese restaurant hubs. But standing out from those established competitors, many of which operate much larger dining halls, could be a challenge in the long run, despite the initial excitement around Tim Ho Wan's arrival.

"As soon as we signed the lease for this property, the word spread, so we knew we were going to be super busy. But this situation is super, super, super, super busy," said Yu Koyama, senior director of corporate development for the Japanese restaurant group WDI. The group owns the franchise rights to Tim Ho Wan in the U.S. and Europe as well as the rights to several American brands in Japan, including Hard Rock Cafe and California Pizza Kitchen.

Tim Ho Wan's runaway success testifies to the power of the brand, but New York simply marks the beginning of its American expansion. Next summer WDI will open a Tim Ho Wan outlet in Hawaii, and it is eyeing locations in Los Angeles and Guam.

When they opened the first Tim Ho Wan in Hong Kong in 2009, Mak Kwai Pui and Leung Fai Keung had no inkling that they would end up creating a global brand.

Born to families in the restaurant trade, the chefs left mainland China in their teens to pursue culinary careers in Hong Kong. Working their way up to becoming head chefs at high-end restaurants, they felt that there were not enough affordable places to eat dim sum. Eventually, they quit to open Tim Ho Wan in Hong Kong's working-class Mongkok district.

"Over the years, the food scene in Hong Kong globalized and I saw less and less authentic Cantonese food. By opening Tim Ho Wan, I wanted to keep the tradition alive at an affordable price," Mak said.

While Mak had previously worked in Lung King Heen (which has three Michelin stars) in Hong Kong's Four Seasons hotel, he said he "never imagined" Tim Ho Wan receiving the honor. But when the restaurant received its star, the chefs sensed an opportunity.

"We wanted people all over the world to taste traditional Cantonese dim sum," Mak said.

They opened the first overseas Tim Ho Wan in Singapore, and then turned to Australia and the Philippines before expanding to other Southeast Asian countries. Mainland China and Japan are also on their radar, according to Mak, although there is not yet a specific plan to crack those markets. 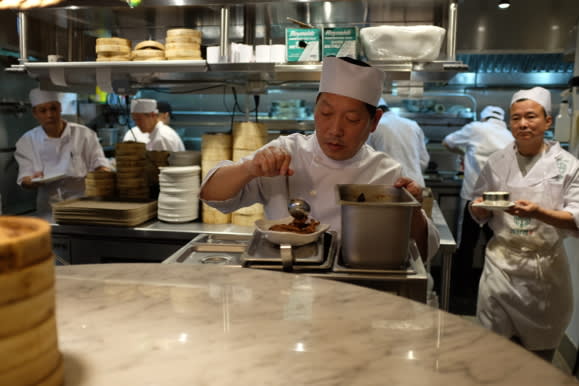 "There are many other small shops in Hong Kong that offer the same or even better quality. But Tim Ho Wan has the story," said Hong Kong-based food blogger and consultant Gloria Chung. "These days, everyone needs a story to dine in a place so they can talk about this on social media and with friends. Without the Michelin background, it could have been just another locally famous shop."

But while the Michelin title generates hype, the French guidebooks group also requires every new location to maintain consistency, both in terms of quality and value. While the Tim Ho Wan branches outside Hong Kong are operated by local companies that buy the franchise rights to the concept, Mak and Leung continue to play a hands-on roles, training every head chef in the proper techniques, and maintaining the final say on decisions such as location and decor.

During the soft opening for the New York branch -- the company's 45th -- they worked in the kitchen from early morning until midnight, turning out dishes such as barbecued pork buns and steamed sticky rice wrapped in lotus leaves.

Maintaining the promise of value can also be difficult. In 2013, facing soaring rents in Hong Kong, the chefs moved the original Tim Ho Wan to a cheaper location so they did not have to raise prices. At the New York branch, where prices range from $3.75 to $5.50 per dish, they face a similar problem as rising Manhattan rents force restaurants out of business.

"We're known as the cheapest Michelin star restaurant [in the U.S.], so we can't charge much more than $5 per dish," Koyama said. "It's hard, but as long as we can keep a full house almost every hour, we can do it."

One way the New York branch might be able to turn over more revenue than its brethren is in the bar. This is the only Tim Ho Wan outlet with a liquor license -- a concept that might seem incongruous in Hong Kong, where tea is the traditional accompaniment to dim sum. Observing Japanese restaurants that have made the transition to New York, Koyama came to understand that adding a bar was necessary for success.

Along similar lines, the chefs came up with two vegetarian dishes that also cater to the American love affair with fried food: deep-fried vegetable spring rolls and French toast with custard filling. Pop songs in the background make the atmosphere "suitable for non-Chinese," as does the decision to locate Tim Ho Wan in the East Village rather than in bustling Chinatown.

However, introducing dim sum to Americans also requires some education. "A lot of Americans, in general, like to dip everything in sauce before they eat it," Mak said. "We trained our staff to encourage customers to try the dim sum without sauce first. If you think that it still needs sauce after you've taken a bite of it without, then go ahead and dip it in."