JAKARTA -- There is a new sight in central Jakarta, something you never saw only a year ago: motorcycle drivers wearing bright green helmets and uniforms, cruising by with passengers on their back seat. They are drivers for Go-Jek, a service that hails the city's "Ojek" motorcycle taxis via a smartphone app. A Go-Jek driver collects a fare after carrying a passenger to a mall in central Jakarta. A Blue Bird taxi passes in the background. (Photo by Wataru Suzuki)

The change is proving popular with commuters. In Jakarta, they are springing up on the street like grasshoppers. Go-Jek's app, launched in Jakarta in January, quickly registered more than 10,000 drivers and 650,000 downloads. The service has expanded to three more cities.

As sales of smartphones grow rapidly, Go-Jek and other smartphone based services are posing a fresh challenge to established transportation companies that have grown on the back of the city's notorious traffic jams.

After the customer enters the location and destination on the Go-Jek app, the fare pops up on the smartphone's screen. Rides within a few kilometers cost around 10,000 rupiah (80 cents), and even though the minimum fare rises during rush hours, it is still cheaper than conventional taxis. Once the customer confirms the order, a driver nearby, dressed in the green uniform, arrives in a matter of minutes.

Change for the better

The ojeks can squeeze their way through the capital's traffic jams, making them particularly useful during rush hour. But many people did not like negotiating fares with drivers, as there were no meters. They also hated wearing smelly helmets and inhaling car exhaust.

Ojeks were also an unauthorized transportation business, enabling anyone with a motorcycle to become a driver. This made it difficult for Ojek drivers to earn a stable income.

"Ojeks were, in fact, a highly undervalued asset," said Nadiem Makarim, CEO of Go-Jek Indonesia, the maker of the app. "There wasn't a level of trust and there was no supporting technology."

Moreover, various services were added to improve the experience: passengers are given free face masks and shower caps to wear under the helmet. Users can rate their driver after the trip, a feature aimed at forcing bad drivers out of the business. "I can earn 300,000 rupiah per day," said Paturaman, a 35-year-old Go-Jek driver. "It is more than I made before."

Much of Go-Jek's business model is similar to that of predecessors such as U.S.-based Uber Technologies, which dispatches taxis via a smartphone app. Uber entered Jakarta last August, and has shown a commitment to stay for the long term. Alan Jiang, who is responsible for launching Uber in new markets, recently said the firm is planning to establish a wholly owned local subsidiary to fully comply with local regulations, a move that came amid rising pressure from local authorities to shut down.

"We definitely want to be here long-term," said Jiang.

The announcement came after five Uber drivers were detained for questioning by the police in response to complaints by an industry group of taxi and other land transport companies.

Uber's service has been ruled illegal by some local authorities, who said it does not have the required public transportation license. Uber has claimed that it is not a transport company because it does not own any vehicles, and has continued to roll out new services and lavish promotions. 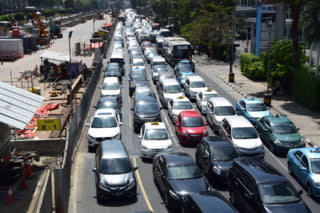 Jakarta’s traffic jams are some of the worst in the world. (Photo by Wataru Suzuki)

With massive financial backing from investors, Uber cares more about expanding and less about making profits. In Indonesia, 100% of the fare currently goes to the driver. Jiang said thousands of drivers are registered with its platform.

Established taxi companies like Blue Bird, the top player, have grown on the back of Jakarta's traffic jams, which are among the worst in the world. They faced little competition as public transportation is limited -- Jakarta's first subway system is due for completion in 2018. Favorable policies were rolled out -- to reduce the number of cars on the road, the local government introduced a "three-in-one" rule in the early 2000s, in which passenger cars with fewer than three passengers were forbidden from traveling on major streets.

Blue Bird also improved its services to lure customers. Its 24-hour call center can deliver a taxi to a customer in a matter of minutes. Its fleet of iconic blue taxis has now grown to 25,000 vehicles, operating in more than a dozen cities across the archipelago. It is regarded as one of the most reliable taxi chains in Southeast Asia.

But as Internet companies crop up to take a bite out of its business, Blue Bird is investing heavily in technology. It will soon introduce a new version of its taxi hailing smartphone app, with additional features such as estimating fares, sending promotions and allowing users to share their trip status through social media.

The company is also working on adding in-app payment options, either by credit card or via an electronic wallet. The current version was launched back in 2011 but has not gathered much attention. App users represent a small fraction of the 8.5 million passengers the company carries every month.

The challenge comes on top of a sluggish economy. Blue Bird's net profit in 2014 only increased 4% from the previous year to 735 billion rupiah. "On the back of weak domestic purchasing power, we expect continued lower demand for taxis," said Agustinus Reza Kirana, an analyst at local brokerage Bahana Securities.

Indonesian conglomerate Rajawali Corpora is currently selling its majority stake in Express Transindo Utama, the No. 2 taxi operator. "We want to focus on businesses that give us a larger scale," Darjoto Setyawan, Rajawali's managing director, recently told the Nikkei Asian Review.