Nidec's charismatic founder still in search for a successor

Like SoftBank and Uniqlo magnates, Shigenobu Nagamori struggles to retire 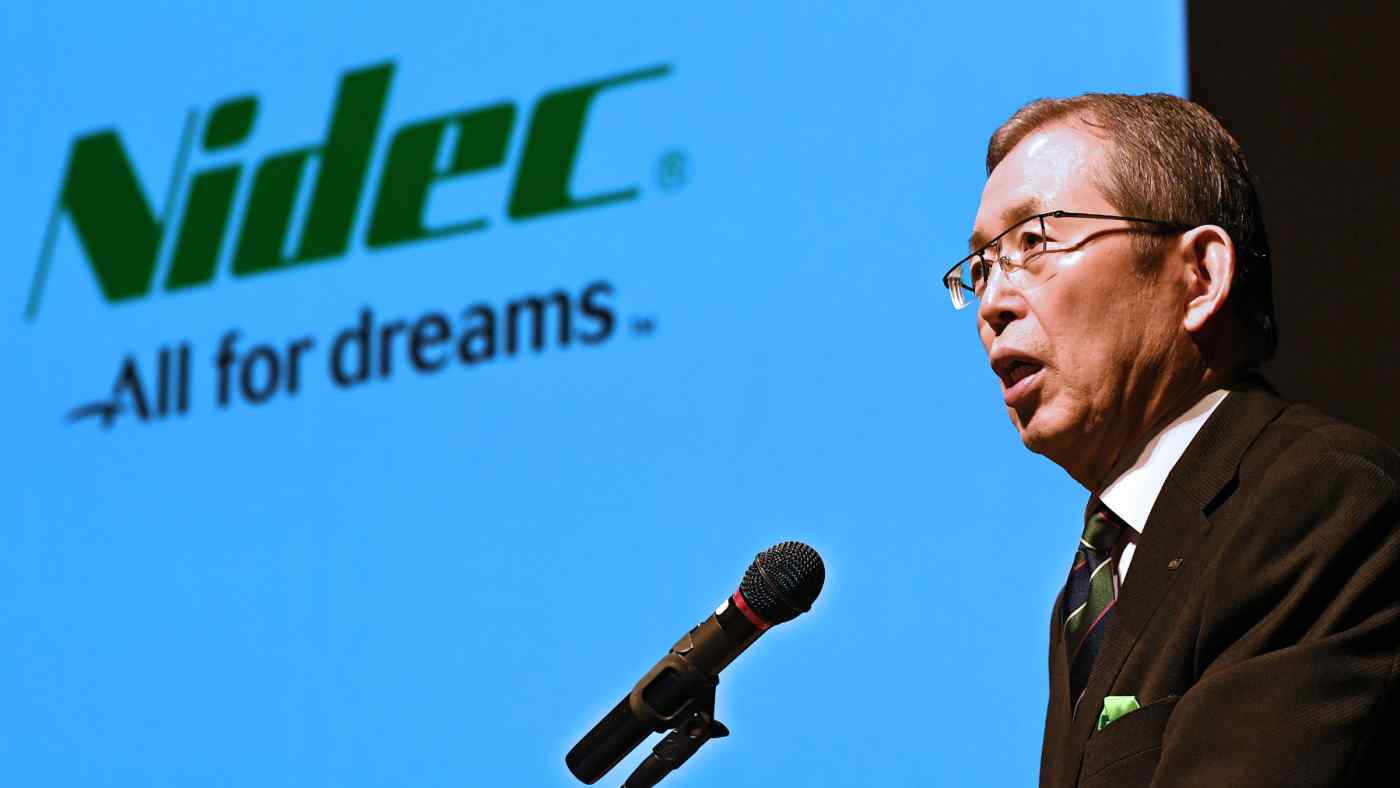 Nidec founder, Chairman and CEO Shigenobu Nagamori, who has led the company since 1973, has been looking for a successor.
NAOKI WATANABE and SHUNTARO FUKUTOMI, Nikkei staff writersDecember 25, 2019 21:36 JST | Japan
CopyCopied

Seki is the third outside executive recruited by Shigenobu Nagamori, Nidec's chairman and chief executive, as a candidate for the position.

Meeting reporters on Wednesday morning, Nagamori was noncommittal on press reports that Seki will join Nidec as a candidate for its presidency.

Financial statements for Nidec, SoftBank and Fast Retailing all include their founders as business risks, stating that operations risk impairment if something befell them.

"We have been struggling to find my successor for 10 years. It's best if we have a charismatic person, but we couldn't find anyone no matter how hard we looked," Nagamori said in an interview.

Raised by parents who sold vegetables from a cart, Nagamori's hungry spirit has always been a driving force. He founded Nidec in a prefabricated hut along the Katsura River in Kyoto in 1973, and has built it up into a company with consolidated sales of nearly 2 trillion yen ($18.28 billion). Nidec acquired more than 60 local and foreign companies along the way, and nobody doubts it will be tough following in Nagamori's footsteps.

An engineer, Nagamori places great emphasis on the workshop. He has always been skeptical of professional managers with more generalized corporate and industrial experience.

Nagamori has already recruited two other possible candidates for the position, both also from the Nissan group. The first, Bunsei Kure, joined Nidec in 2013 from Calsonic Kansei, a Nissan-affiliated auto parts maker since renamed Marelli. Kure was promoted to representative director and executive vice president but left Nidec in 2015.

The second was Hiroyuki Yoshimoto who had worked at Nissan and Calsonic. Coming to the fore through the reconstruction of a Nidec subsidiary, Yoshimoto was promoted to president last year from executive vice president by Nagamori, who retained the position of chief executive.

At the news conference in early 2018 to announce Yoshimoto's promotion, Nagamori said, "After picking him, my biggest task is to foster him so that he can manage the company equally well."

Although the transition of power from Nagamori to Yoshimoto appeared smooth, Nidec slumped. In January, when Nidec announced a sharp downward revision of the group earnings projection for the fiscal year ending Mar. 31, 2019, Nagamori described it as "a decline we have never experienced."

Yoshimoto was told by Nagamori to turn around overseas operations, which include the large motor business, but that may not yet have generated satisfactory results.

"If I had said, 'I will take care of everything,' [Nagamori] would have placed greater expectations on me," Yoshimoto said in a late December interview. "Frankly, I am still looking at his back as I do my work."

Many other Japanese companies have had resort to trial and error when the time comes for charismatic founders to retire. Son set up SoftBank Academia in 2010 to educate his successor. Still not 55, he announced that he would step down as president at 60. In 2014, he recruited Nikesh Arora, a vice president at Google, as his likely successor instead of going for a candidate from the academy.

In 2016, Son thought better of handing over to Arora. "I thought of resigning but have got my appetite back." He has since made some aggressive moves, including the establishment of huge investment funds and acquiring Arm Holdings, a British multinational semiconductor and software design company.

Yanai handed the presidency of Fast Retailing to Genichi Tamatsuka in 2002 when he was 53. Dissatisfied with Tamatsuka's performance, Yanai took it back while holding on to chairmanship.

Despite announcing plans to step down as president at 65, Yanai said in 2013, "It is impossible to resign at a time when the globalization of operations is accelerating."

An example of a successful transfer to professional managers is Suntory Holdings, which recruited Takeshi Niinami as president from Lawson where he had been chairman.

The helm at Kyocera, which is often compared with Nidec, was also taken over smoothly after founder Kazuo Inamori left.

While charismatic top executives often build strong companies, they can be exceptionally tough to replace. These individuals may also have expanded operations during periods of higher growth. Nagamori's struggle for a successor, with its false starts and reversals, is therefore being watched closely by other top executives facing a similar problem.